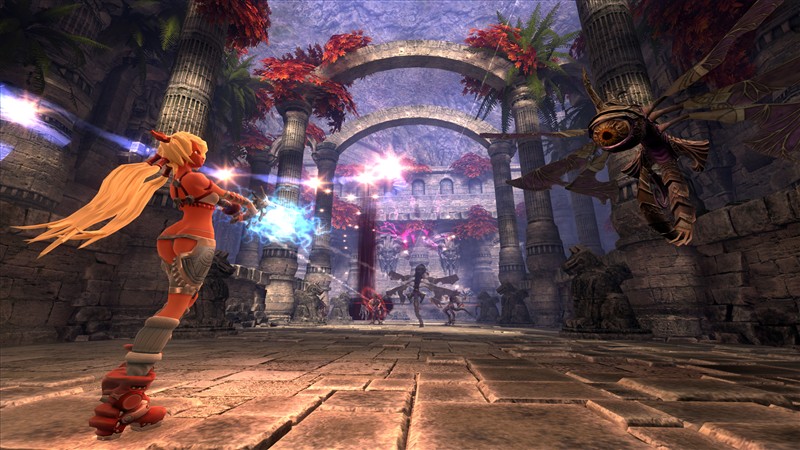 X-Blades is the latest from SouthPeak Games and features the sassy but tenacious relic hunter Ayumi, as she quests for all things shiny and mysterious. She’s not quite Lara Croft, but in her own way shares a similar desire for adventure and exploration. Armed with her trusty gunblades and the ability to unleash magical attacks, Ayumi makes for a formidable adversary for those creatures which protect the very essence of what Ayumi desires. The game sits snugly between hack and slash and dungeon crawling as a hybrid of the two game styles. However does the game live up to its promise of high action/adventure, or like Ayumi’s over exposed butt cheeks, is too bare an experience due to a lack of depth?

The game begins with a introductory sequence which sets the scene nicely in terms of who Ayumi is and what her goals are. She is cursed from the offset, due to her inquisitive nature, and so the stage is set for the rest of the game as she begins her quest for relics and answers. The intro leads perfectly into a pretty standard tutorial mission, which highlights the basics of movement, attacking and casting spells. It’s pretty straight forward and shows that what’s on offer here is going to be an accessible venture. Ayumi’s dual purpose weapons means that you can focus on simply attacking without having to be too concerned with equipping tools for specific tasks, this is reserved for the magic (more about that in a moment). Ayumi can perform basic melee attacks with the X button, and in combination with jumping (A button) some aerial moves. The game opts to keep things simple by not providing plenty of different moves, although as you progress through the story, you’ll be able to gain additional attack moves to add to your repertoire. For those not inclined to get too in depth with the workings of combos and such like, then it is quite possible to simply hammer the X button and adequately take out various foes, although as you progress through the story, you’ll find the game requires you to start mixing things up a little. The shooting is controlled by use of the Right Trigger, and a pseudo lock on system. The lock on takes a little while to get used to, because it’s not quite what you might expect. Whilst you are leaping and slashing away at enemies, a reticule appears on screen to highlight those enemies in your line of sight. This is useful for shooting and being fluid at targeting multiple enemies. However, to actually lock on, you’re required to hold the Left Trigger. The problem here is that due to there often being lots of enemies surrounding you, it becomes quite difficult to lock on to a specific target should you need to.

The magic brings the game into another realm, and introduces a more strategic element to the gameplay. I say strategic in the loosest sense, but compared to merely hammering a single button it makes for a welcome layer of minor complexity to the combat. The enemies all seem to have various weaknesses, which means, whilst you’re attacking, you need to pay close attention to what offensive moves work best, otherwise you’ll not make much progress. For example, early on some flying enemies seem to be immune to gunfire, but weak against magic and blade slashes. Then there are those that are only damaged by opposing magic attacks. So, for example, a fire element enemy is going to only be extinguished if Ayumi uses an ice based magic attack. It’s pretty straight forward once you perhaps take a look at the bestiary in the pause menu, which highlights the enemy strengths and weaknesses.

The game uses a system where you can purchase new spells by collecting souls from the fallen (actually you don’t collect them, they are automatically drawn to you). The trick to getting more of these is to perform attacks without getting hit, (to build up a multiplier) or searching cleared levels for statues and vases which can be broken. The spells start off costing very little, but as the game progresses you’ll need to collect lots more souls to afford them. What’s neat is the option to replay any previously passed level to ‘farm’ for more souls should you need to. The game offers an open map in this regard, so you’re able to travel around at will, rather than forced to progress forwards. There are also valuables to collect in most levels which can boost the number of souls. As you clear each area, you’ll exit and be presented with a stat screen, which informs you how thorough you’ve been, so if you’ve missed a few collectibles, you can go back and try again, although luckily any that you’ve collected already don’t need to be grabbed a second time.

Looking at the enemies, they are a weird bunch of critters, which as already mentioned will mostly swarm you and bite at your ankles, or unleash magic attacks of their own. They range from lizard like creatures, to spiders and colourful wisps. On occasion, you’ll face a boss enemy which offers a little more challenge. The game uses a ‘Rage’ meter to determine Ayumi’s magic offensive; if she is hit or melee attacks, then a meter is filled which means she can unleash her magic spells. If there’s no Rage she can’t use magic. This mechanic is woven into the boss battles, as you’re often required to slash away at the lesser enemies to build up Rage so you can then fire off a magic attack at the boss. To make things a little easier, you’re able to assign spells to various buttons so you’re not having to cycle through the menu to select them – although you can do this if you wish.

I like the simplicity of the fairly solid combat and magic, and in some respects it’s a breath of fresh air, not having overly complex maneuvers to perform the basics of killing enemies. My only real complaint is perhaps some not so solid collision detection which can often make you wonder whether you’re actually doing any damage or not. This is most apparent when attacking stationary objects such as vases. You’ll see Ayumi’s blades slash right through them with no effect whatsoever. It’s a minor quibble, but does somewhat detract from the experience.

X-Blades has some pretty neat looking environments that range from deserted ruins to tight corridors and tunnels. There’s enough diversity to keep things interesting as you play through the story. However, about half way through the game, you basically have to start from the beginning and work your way through the same levels at a different time of day. Call me cynical, but this seems to be a device used to deliberately prolong the experience. As far as the enemies are concerned, they do seem somewhat generic looking, and none them (bar the main boss) being very memorable. The aforementioned collision detection does pose a problem on some occasions, and really suggests a lack of polish when you can simply pass through solid objects(like the legs of a boss character). There’s also some basic textures and over-saturated lighting used sometimes which lends itself to being cheap rather than lovingly crafted. We all know what the Xbox 360 is capable of and so it’s a shame that its power hasn’t been fully utilized. That said, Ayumi and her rosy cheeks are well rendered, and as the star of the show has the most visual flair applied to her, in both design and animation.

The music is a mixed back of mysterious pensive sounds, fused with uptempo dance like tracks when the action heats up. I really liked the overall aural picture, and felt that it suited the game very well. As for the voice acting, (which there’s not too much) I would say it’s more akin to a TV show than something you would hear on the big screen. Ayumi has a somewhat grating voice that you’ll either warm to, or detest with a passion. I’m still not sure which side I would place it on. The sound effects seem to do the job as required and nothing more.

X-Blades offers a pretty lengthy campaign despite having to replay the same levels as mentioned earlier. You’ll certainly get your monies worth in this regard, and if you’re a completionist, then there’s plenty of incentive to play through the story at least twice or more. My only real concern is the challenge factor, because once you ‘nail it’ can be quite easy, even on the game’s unlockable Pro setting. That said, for those who do get into it, will have a pretty solid and entertaining experience.

X-Blades is a solid title, and although it might not be as accomplished as some similar games in the genre, it certainly is a valiant effort. Ayumi is cute and likable (when she’s not talking), and offers a different take on searching for artifacts that the likes of Lara Croft couldn’t even imagine. There are some moments of frustration, but these rarely pose too much of a threat to your composure. If you are looking for a simple, no-nonsense action adventure, then you would do well to give X-Blades a chance, because frankly it does what it sets out to do, nothing more, and nothing less. If you’re a younger gamer, then you’ll find the game’s relative simplicity appealing. For hardcore gamers, the lack of suitable challenge might leave you somewhat unfulfilled. X-Blades is a decent semi-naked romp that excites as equally as it disappoints, but ultimately offers an accessible experience for those of you who can look beyond more traditional aesthetics.