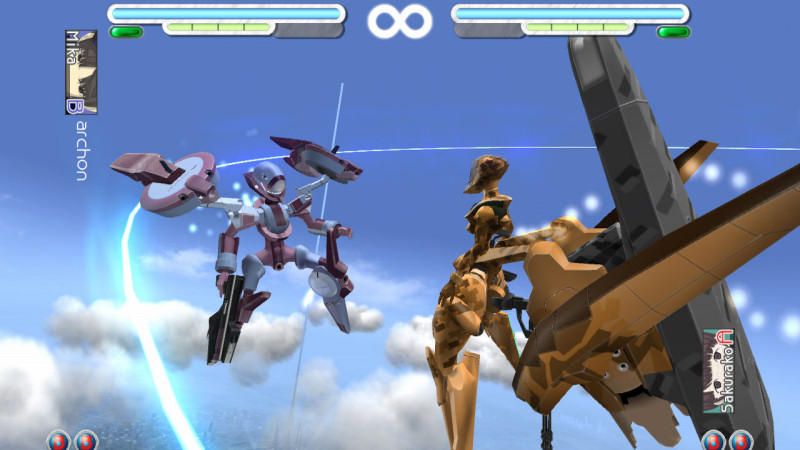 WarTech Senko no ronde is an arcade fighting game developed by G.Rev and released on the Sega Naomi board. The game is set in the future where the human race has inhabited various regions of the galaxy. However nations are at war with each other over the distribution of wealth and resources back on Earth. It is here where we are introduced to several wacky characters who each pilot a mech or “Rounder” as they are referred to in the game. The imagery is certainly very Japanese and it’s certainly an interesting hybrid game. Has the translation to home console from Arcade been a worth while move or has something been lost in transition?

As mentioned WarTech is a fighting game of sorts where instead of fighting on level ground as seen in numerous other fighting games; you are thrust into the skies for some airborne combat. Playing the game you don’t have to control the airborne nature of the Rounders (in terms of altitude) as this is handled automatically; what you do have control of is the lateral movement across the screen as well as an assortment of various weapons. In this respect the game is fairly simple, however there’s a lot more to the game than that. Each Rounder has its own strengths and weaknesses where some excel in close quarters combat and others are better at longer ranged attacks or defence. Each Rounder is very different in terms of its attack and defensive moves and by playing versus the computer you’ll get to learn the individual nuances of each one. There is a training mode available for you to practice and as with any fighting game this should always be the first port of call.

From the main menu there are several modes of play which includes Story Mode, Score Attack, Versus and Xbox Live. To be honest the number of modes here is rather limited considering the game is based on the fighting game template but don’t let that put you off. Story Mode is probably the best place to start once you’ve had a quick stab at training; as it is here where we are given a little background to the characters. There are 8 playable characters both Male and Female (and Android too) and whilst the stories can be completed quickly, there are alternate endings to aim for on further plays. The story is something that can easily be ignored yet at the same time if you want to know more then there is an encyclopaedia to look through which fills in a lot of the blanks. Fighting games are not renowned for their great storylines and I guess WarTech is no exception; this means you can focus on what counts – the fighting! As with every fighter out there the aim is to battle through stages until you reach the end boss.

During fights the aim is to deplete your opponents’ health bar, by any means necessary and so due to the nature of the Rounders means that there’s plenty of ways to do it. What you have to bear in mind is your positioning as the game allows you to perform long range, medium range and short range attacks; the latter being melee orientated. An on screen display shows you what weapons will be used at any time and whether it is being reloaded or not. It’s something that will help beginners but after a while you should learn the ranges and reload times of the various Rounders without the need for reference. There are also defensive moves and attacks associated with being in defence and so to be a successful fighter, you need to know when to go on the offensive and when to hold back a little before unleashing your own attack.

Looking at the attack moves you have things like lasers, mines, bombs, missiles (both guided and unguided) and various other high tech attacks. These usually fill the screen with lots of hazards all over the place and it becomes quite the job for your opponent to successfully avoid them; however there is an option to dash out of harms way. Battles tend to be a hectic affair and like I said it’s knowing when to get in close or stand back that will win the day. All of the characters seem to be well balanced except Ernula who was far easier to use than the rest of them due to her powerful long range attack ability.

One of the more interesting features of the fighting comes in the form of the Boss mode. That’s right, because during rounds you can transform into a huge boss like character that rains down suitable punishment on any opponent. This is a great feature in terms of providing a sense of scale; however in reality the CPU AI is usually a little too good at avoiding the hundreds of bullets, missiles and lasers being fired at it. When it’s your turn to be on the receiving end then the pain begins as it can be virtually impossible to avoid being hit.

The Boss mode also has a slight tactical element in that you can build up a meter and get the maximum effect from the transformation or you could opt to use it before the meter is filled and get lesser time in Boss mode. Much fun and joy can be had when you are tactically holding off your attack to ensure the victory, only to have the plan foiled as the CPU unleashes their own attack first. The Boss mode can certainly turn the tide of a battle, especially if you are losing. My only real complaint with the Boss Mode is the “floaty” nature of the controls which makes it very difficult to aim at a weaving opponent.

Graphically Wartech looks fairly decent as it presents a very distinct Japanese look throughout but at the same time the game looks a little dated. There are lots of neat graphical touches such as sparks, smoke and other lighting effects from the lasers to marvel at but the character models could have done with more polish. Don’t misunderstand me; their design is spot on for a game of this type but the actual models in game could have looked a little better.

With lots of on screen action going on, WarTech moves and plays well at all times. I noticed no issues with the game at all which is a good thing as it could have suffered from the dreaded slow-down with the amount of lasers, bombs and bullets going off. The camera is fairly dynamic and displays a top down view when at long range and zooms in when you get into close quarters territory. I think the game offers a very anime cinematic approach and in this respect it works.

My only real complaint here is the lack of real time scenes for characters endings. Sure a lot of other fighters have offered text and image based endings but it would have been nice to see the characters brought to life outside of the still images that are featured.

The sound is all very Japanese and with no option to change the voices to English means you’ll just have to settle with reading subtitles. Now in a lot of games this is actually a good thing as sometimes English voice-overs are pretty poor; however in Wartech there are a lot of conversations during battle. With no means of reading the text whilst you avoid incoming fire and unleashing your own attacks means us westerners are going to miss out on important snippets of info and some depth to the characters (the conversations are also key to unlocking the alternate endings in the game).

The sound in terms of music is good as there are some foot tapping tunes to suit whilst you bombard your opponent with rockets and such like. Each stage has its own music and I must say it does add some atmosphere to proceedings like it should. Other sound effect are as you would expect and whilst the voices are Japanese they do sound like they are involved performances all round – so thumbs up there.

WarTech offers a fairly short Story mode to combat with the 8 characters and also a score attack which sees you battle through 10 stages with two lives. It’s a mix up of survival and scoring with the aim to beat the game without continues so as to upload your high score to the world leader boards via Live.

To take things further there is an online versus mode where you can test your gaming prowess on the world stage for one versus one battles. However at this time I couldn’t find any players to fight (hopefully this situation will improve once the game ships in more regions). For offline play there is the option to battle it out with a friend and this should keep gamers occupied if you have not got Xbox Live.

WarTech is no doubt going to fall under the Niche category and with games such as Def Jam Icon also being a more mainstream sort of niche I wonder how much appeal this game will have outside of Japan? If you like fighting games, mechs, shooting and wacky Japanese characters and don’t mind the fact that there’s no English audio then I think this game is well worth a look simply because it’s quite different from the norm. If none of these things appeal to you then I suggest you look elsewhere as I’m sure you probably wont “Get” the game and what it stands for.

I’ve enjoyed playing the game as a unique gameplay experience and it’s good to see that someone is trying to present something a little different on Xbox 360. WarTech is fun and at the same time disturbing especially as the imagery has some provocative elements. This also stretches to the male android Cuilan who not only looks like a girl but seems to have some images that will no doubt test the minds of the weak (I shan’t say anymore than that).

Is WarTech good value for money? Well if competitive online/offline play is your thing then sure, I think purchasing the game will be a worthy investment (that is unless the online community doesn’t build up a bit more). For those not sure or not connected to Live or have any gaming friends (ah bless) then I fully suggest a rental as there’s not too many hours worth of play once you’ve beaten the computer on various difficulties.

With WarTech coming from an Arcade heritage, where in Japan at least there are thriving communities of gamers willing to place their coins on the cabinet and challenge and be challenged by human adversaries face to face. The transition to console has worked well and will no doubt garner some new fans; so in this respect the game does well. However with limited appeal outside of Japan I think a lot of gamers will overlook this game and then miss out on something quite unique.