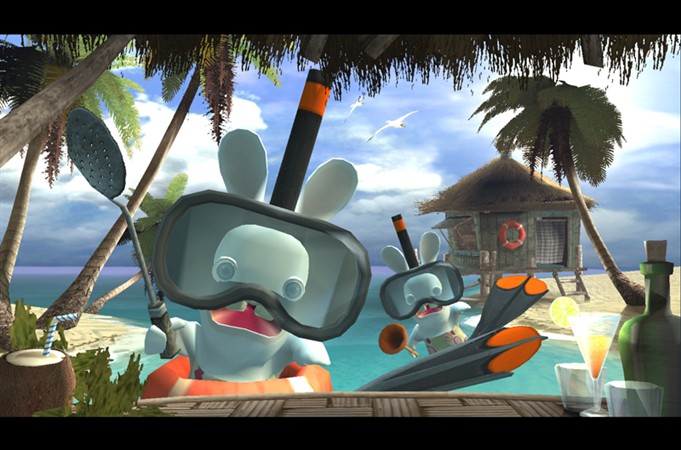 Rayman has been around for a number of years and has starred in several titles spanning multiple systems. With the advent of more powerful hardware being available and in the case of the Nintendo Wii, differing game play methods we have a new Rayman game on our hands. Once again the crazy looking character makes an appearance on multiple systems. In Rayman Raving Rabbids, Rayman’s frog friends are mysteriously kidnapped by the cute or should I say not so cute looking bunnies. Rather than being left behind, Rayman is also captured and forced into a twisted gladiatorial arena for what seems like the morbid amusement of the bunny masses. In the arena Rayman has to perform a wide variety of tasks in the form of mini games so that he can release his captured buddies. Not only that, Rayman must also find a way of escape as life with the crazed bunnies isn’t much fun (for Rayman at least).

If you are used to seeing Rayman in plat-forming adventuring then you might be a little disappointed because this game features nothing of the sort. The only direct control you have over Rayman is in his tiny cell and when walking around the arena to choose which mini game you are to play next. What Rayman Raving Rabbids does provide is a more party like game in which you and up to three friends can battle it out in a wide number of mini games. For the lone player there is of course the story mode which involves playing all of the mini games in order to release Rayman’s friends and escape from the bunnies.

The mini games come in a wide variety of which there are too many to list here and involve things like hammering away at the pad as fast as possible to more refined tests of skill such as using memory, rhythm and drawing skills. There’s certainly a lot on offer here and because of the variety you can’t ever say that any particular point is boring . The mini games are all pretty fun except a few which can cause major frustration due to the high levels of luck required for success. However what has to be noted is the huge amount of slapstick humour present throughout the game which just adds some much needed comedy to the title. Even the loading screens feature humour. I particularly enjoyed the screen which featured a pervert bunny sneaking a peek at a lady getting changed at the beach; only for him to discover that it was all fake and clever disguise for hiding a deep pit in which said bunny falls into amidst wails and screams.

One of the more interesting mini games on the disk are the on rails shooter sections. These offer a much more traditional gaming experience and with the first person viewpoint used will feel more like House of the Dead than Rayman (minus the zombies of course). Armed with a sink plunger gun type thingy you have to rescue your trapped buddy by plunging any bunny that gets in your way. However bunnies will attack you with close range attacks as well as using their own plunger type weapons. The bunnies pop out from all sorts of places and so a keen eye and trigger finger are what is required for success. For more advanced players there are points to consider and using things like the grapple will help in gaining top scores.

What I also found amusing was the Splinter Cell bunnies who are the same as regular bunnies but wearing the distinctive goggles that Sam Fisher wears. It’s certainly amusing and more so if you’re a fan of Sam Fisher especially when you head shot these guys and watch them fumble around as if to say “Who turned out the lights?!”.

Rayman Raving Rabbids offers a score mode in which gamers can battle the mini games with friends (up to 3 other players). As an additional bonus and not necessarily excusive to the score mode but gamers can use the Vision Camera to play some of the games rather than just using the regular game pad. Luckily I didn’t try this out but can imagine is a more tiring and perhaps a little tougher than using the pad for some events.

Graphically Rayman Raving Raybids looks ok but nothing that is going to make you say wow. There’s a varied selection of mix and match clothing items Rayman can wear but these are merely cosmetic as far as I could tell. A particular favourite of mine is the disco hairdo as it looks quite funky. It’s clear the game has been designed for multiple systems and so what you can really only expect from the Xbox 360 version are marginally clearer visuals in general. There are some diverse levels on offer and so you can expect a lot of differing levels of visual quality. The most striking being the on rails sections as these are more likely to stand out than the other games despite being quite tame in comparison sometimes. I encountered no graphical hiccups in my play other than the occasional glitch where a rabbit would get stuck and mean a restart of that shooter section. This actually only happened twice and is really not something to be bothered about (unless you are playing survival mode – then it would be a proper pain).

To accompany the humour in the game then obviously a light hearted soundtrack is used to maximise the effect. What the game really excels in are the sound effects which like the mini games themselves are quite diverse and varied. Everything seems to work just fine and is fitting to what is happening on the screen. I especially liked the bunny remixes of tunes for the rhythm dance mini games such as Le Chic’s “Good Times”. The only problem I encountered here was sudden loss of sound in the dancing mini games although this could simply be a faulty disc of dirty laser eye. In my case a restart of the level rectified the issue and rightfully so as doing a dance/rhythm game with no sound is pointless.

The story mode can be completed in a weekend of solid play and that’s fine and dandy; however for purists and those that want to get 100% in the game then be prepared for the long haul. There are some fiendishly tough targets to reach and if you lack the patience and to a lesser extent the skills then you may as well forget trying (unless you have a few months to spare that is).

Rayman Raving Rabbids does offer a party like flavour and so with 3 other players the competition can really heat up especially if the vision camera is used. It’s not really going to match the intuitive play of the Nintendo Wii version but is a welcome addition to the package. Sadly there are no options for Xbox Live Play which is a big disappointment as the mini games are well suited for four players. The only online component to the game is getting a code and submitting it to a website so you can check your standing in the leader boards. These omissions seem like terrible ones and I can’t imagine why the option of Live play wasn’t included?

Rayman Raving Rabbids is an all round fun game but as I said if you are looking for a more traditional Rayman plat-forming experience then you might feel a little let down. That said, if you do give the game a chance then there’s no doubt a smile will be brought to your face at some point. If you are a more serious gamer then perhaps Rabbids isn’t going to appeal as much to you. There’s certainly a fun aspect to the game which is well suited for multiple players but the lack of any Live options is severely limiting. I would say rent this game first and if you are taken in by Rayman’s plight and wish to complete the entire game with your godlike skills then buy; it will certainly last you quite some time in this respect and perhaps add some grey hairs to your head depending on your composure during times of extreme stress. Rayman Raving Rabbids is a fun yet very different Rayman game and in my opinion it’s hit and miss as to whether fans of previous games will enjoy this due to its departure from what is expected. A real Marmite game, you’ll either love or hate it.