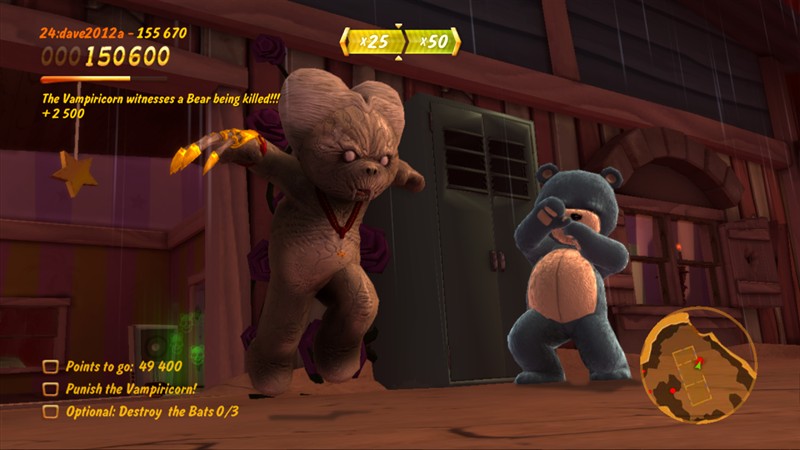 Naughty Bear is an interesting game from 505 Games, (developed by Artificial Mind and Movement) because there are a few things aside from a cast full of colourful teddy bears that seem a little unusual for a retail priced game. Weighing in at around 700 MB (when installing the game) seems rather low considering most games range from 4-7 GB in size. The question this issue raises is, should Naughty Bear have been released via the Xbox Live Arcade for 1600 – 2400 points? It’s a good question, because after playing Naughty Bear for a few hours, you’ll spot the reason why it should have been download only and might even been more profitable for the developers/publisher.

One look around online retailers points to a game that is being sold at £29.99 which isn’t full priced but certainly sets you back more that say 2400 or even 1800 via the Xbox Live Arcade. So, reasons for bringing up the price here as an issue is game content and how much you’re getting for the price you’ve paid. Sure, Naughty Bear adds on a multiplayer mode, but for gamers looking to play the basics are perhaps going to feel a little short changed with the single player offering.

Naughty Bear starts off on the right track by introducing you to the poor, hard done by, and slightly ragged brown bear, called Naughty Bear. He’s not been invited to a party, he’s shunned by his pears and is basically at the end of his tether, breaking point. So what does any self respecting bear do when the chips are down? That’s right, grab an axe or baseball bat and start scaring, maiming and killing ones tormentors, an in this case it’s the other bears. So, that’s it, the premise of the game which you’ll do from start to finish. However, the variation comes from different requirements for each level. On some the requiremnent might be to kill every single bear, another, amass a certain number of points. They get tougher as you progress through the levels, whereby eventually you might have to complete tasks such as reaching a set score, but with the added challege of not being spotted, or possibly hit…once. These make the game a lot more rewarding, but seeing as most levels are divided into stages means there are some pretty unforgiving moments, especially as there are no checkpoints whatsoever.

Playing the game has Naughty Bear pick up items such as the aforementioned melee weapons (sometimes guns), traps and using them to acquire points. Whilst you do score points for simply killing a bear in cold blood, the onus is on spooking the bear first, to amass higher scores. There are lots of items in the small maps that can be tinkered with like telephones and cars, toilets etc, and either utilizing sabotage or just plain destroying them will cause bears to come and investigate. There’s an element of stealth involved in that, unseen, you tamper with an item and then slink back into the undergrowth and wait for a bear to come. What normally happens is you’ll gain points for the bear seeing the item, then they’ll try and repair it. This gives you the opportunity to get behind them and perform an ultra scare, or a contextual kill, thus netting lots more points than simply killing them with melee. The game does offer lots of ways to scare and kill the bears (some 200 ways), but the trick is to keep scaring them until they go crazy and kill themselves, unless there’s a specific mission requirement which prevents this.

Whilst having 200 ways to gain points sounds like a lot, there does seem to be limited variety in what you do. Throughout the 35 odd missions spread across 7 episodes, you’ll effectively be doing the same tasks over and over to the point that it can become repetitive. It’s mischievous at first to capture a bear in a trap, sneak up and scare his pants off before turning him insane and watching him busrt into a puff of stuffing. But after a while these moments become null and void.

There are some bold colours used as everything fits within the confines of what looks very much like a kids game. You’ve got various coloured bears, sometimes sporting pleasant looking hats. However, don’t be expecting much in the way of detail, and in this regard Naughty Bear is quite basic, and lacking in visual flair. Despite being an adult game there’s no blood, which altough stuffed bears don’t bleed, it could have added a bit more to the game on a visual level. What’s really annoying is the poor use of camera which doesn’t sit right with panning around your character and makes navigation not as fluid as it could be. You’ll really have to get used to the camera, as sadly it simply detracts from the game.

There’s some amusing audio, but bar from the announcer who’s supposed to be like a kids TV narrator comes across more like a camp Tony Slattery. It works, but can begin to grate after a while. There’s much innuedo, without there being any, thanks to the ‘naughty’ way in which the announcer speaks. Other sounds are from the bears themselves which are more like cute squeeks and the growling of Naughty himself. The ambient sounds are unusual especially the repetitive and non eventful music, and when you combine the sounds of a constant overhead helicopter, you’ll possibly want to turn the sound off.

As already mentioned, you’ve got some 35 single player missions to go through, with some taking longer than other to complete. However, there are many missions where you can rush through if you care not for high scores. The longevity for lone players comes with leaderboards that are online enabled, or trying to best your own score. Aside from the single player antics there’s an online multiplayer mode to sink your teeth into, but a lack of players might prove to be a problem more than anything the game’s design throws at you. The onus is on repetitive play and the issue that’s raised is, how long will you continually do the same stuff over and over until you tire of it?

Naughty Bear isn’t a bad game per se, and features some neat ideas, but is ultimately lacking in vision and variety. What’s on offer makes for a game to dip in and out of from time to time, but not something that’s going to keep you engrossed for a long haul gaming session. There’s reasonable challenge on offer if you persevere, but this doesn’t mask the fact that you’re only going to tackle these over a period of time rather feel urged to carry on to beat the game in one sitting. With few hours to beat, lots of repetitive tasks, a dodgy camera and a price tag that’s possibly a little on the high side for what’s on offer, and you have a game that can only be reccomended to die hard players looking for some stealth based mischievous play. Yes, it’s different from your regular stealth, action game cum shooter; but at the same time simply fails to ignite the gaming imagination beyond the first hour of play.