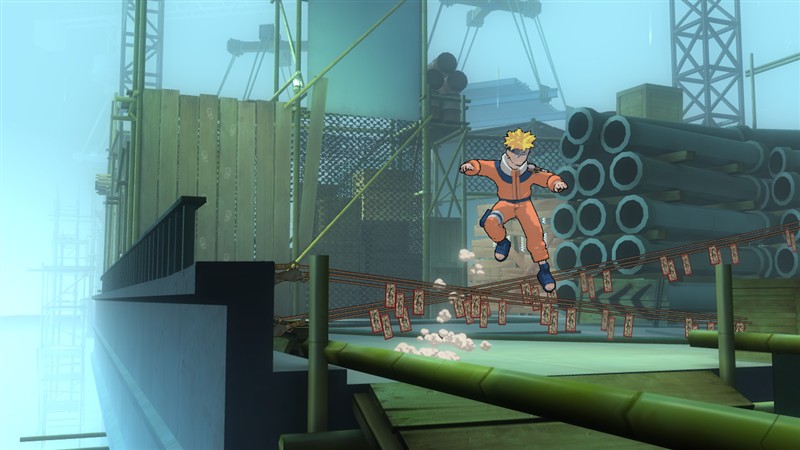 Naruto: Rise of a Ninja is based on the popular anime series, which has gained huge popularity not only in its native Japan, but also in Europe and the US. The series (and game) tells the tale of ninja in training Naruto Uzumaki, who is cursed from birth with a nine tailed fox captured, within him. The nine tailed fox had previously attacked the people of Leaf Village and now it’s residents bear a grudge towards Naruto, who has no knowledge of what lies within him.

Naruto himself is a bit of an oddball character, and what makes the series such compelling viewing is not only the comedy value of his character, but also the way in which he strives to better himself and one day become the head ninja of the village (Hokage). The game follows the story from episodes 1 up to 80 (each TV episode lasting around 20 mins) and holds true to the anime series, bar some minor changes here and there.

Naruto: Rise of a Ninja is a mixture of gaming styles, as on one hand you have a simple but effective fighting game engine, whereas on the other, you have a game that offers some typical free roaming adventuring, complete with mini games. The fighting engine incorporated into the game’s story mode, but also a standalone mode which can be played via Xbox Live or with friends.

The Story mode is probably the best place to start ones adventure, and like the opening of the TV series puts Naruto into a state of being hated by all the villagers (they are marked with angry face icons). He’s flunked his ninja exam, and now has to win back the respect of his peers and the populace. How this is accomplished takes many forms in the game, what with embarking on various missions for the ninja clan, to helping out citizens with some, not so ninja like activities. When villagers are happy with Naruto, a happy face icon can be seen above their heads; what is more they will even offer him assistance at finding objectives and the hidden items in the game. A map is displayed on screen at all times, and this shows the locations of any potential missions. To give you more of an idea of what’s available, aside from the main story missions are things like delivering food to clients, finding other characters items, races and collecting coins. A lot of these are actually optional and you could just simply carry on with the story based missions (marked by blue scrolls). However, I think you’d be missing out on not only some character upgrades, but a lot of the game’s charm.

Naruto starts out like any adventure game character, with basic skills that merely help you get by. However as the game progresses both story wise and by completing tasks, Naruto is upgraded with not only more health, and chakra (ninja power), but also with additional moves for fighting, and some additional abilities. Being able to walk on water has it’s rewards, as does being able to double jump and walk up the side of buildings!

There’s quite a platforming element to the game, and with the powers gained through continued play, the village opens up more, offering you a greater expanse to explore. The sense of scale here is pretty impressive, and of course for those of you keen on completing all tasks laid out before you, then you are going to have to search pretty much everywhere.

Naruto: Rise of a Ninja isn’t just set in the Leaf Village, as completing story and side missions will open up the surrounding areas to explore. These areas seem to focus more on the platform element, although you have to watch out because it’s here where you will face off against the many opponents where the fight engine comes into play. In fact my only real gripe here was, other than characters that are part of the story, there seemed to be a number of generic opponents that you would fight time and time again (grrrr, that bandit boss seemed to get around a bit)! It’s a shame the team couldn’t have utilized more character models, just to mix it up a little more.

The fighting is pretty fluid, albeit on the simple side of things. There are two main attack buttons and some simple combos to perform. What makes the combat stand out are the special moves which are handled pretty well. By inputing directions using the left and right sticks and holding the left trigger, characters can perform these over the top special moves (Jutsus). The game takes a cinematic angle here and again creates a mini game. In versus modes then the opponent also enters the mini game, and obviously has to defend against the onslaught of powerful attacks.

One interesting mini game that is part of traveling from area to area, is an amusing tree hopping mini game. Here you simply have to jump through checkpoints whilst avoiding incoming fire. The bonus here is, if you are able to get a good pace going you enter a super mode where you travel pretty fast through the trees. The trick is to not miss the checkpoints, or lose your balance with your steering and button presses respectively affecting the outcome. It’s a minor distraction, but one that is amusing and breaks up the regular platform, fighting outside of the village.

Graphically, Naruto Rise of a Ninja looks excellent with it’s use of cell shaded characters, combined with more solid looking environments. There’s not much realism here, but an accurate portrayal of the anime. This is one of the game’s biggest strengths, and for fans of the series they should feel totally a part of the game world and feel impressed at the great job the developers have done in recreating the Naruto World.

Aesthetics aside, the game runs silky smooth, not only in the single player, but also the versus modes. When the pace picks up later on in the game (when Naruto learns the dash move), you really do get a grand sense of perspective which feels just right for a Naruto game. If I was to gripe about the graphics, then other than the repeated models I mentioned earlier, it would have to be no day and night cycle. Whilst this may not have been entirely in keeping with the series, it could have added an even greater layer of impressiveness to the game world. Another gripe is the lack of lip syncing when characters talk. This somewhat takes away from the overall level of polish the game has.

The sound is excellent, due to the fact that for the most part, the leading characters voices have been dubbed by the cast from the series; meaning that everyone is instantly recognizable bar the visual cue. The game’s soundtrack is also lifted from the anime series, and it’s great to hear certain tunes when fighting or during key moments of the game. For those of you unfamiliar with the series, then I think whilst the impact of the music and to a lesser extent the voices will be less, I still believe that there’s enough character and good performances to entertain and entice you into the game world.

Naruto Rise of Ninja offers reasonable playtime for those of you wishing to play the single player portion of the game only. There are lots of activities to embark on, and whilst the main story can be completed fairly quickly; for those of you wanting to gain 100% game completion, this is going to take a lot longer. If you couple this with the versus mode, and of course Xbox Live play, then there is certainly a lot to sink your teeth into. Sadly, the single player game isn’t going to offer much replay value once you have gained 100% completion, but I doubt this will pose too much of a problem considering how long it will take to get there.

I’ve thoroughly enjoyed playing Naruto: Rise of a Ninja. I find the character to be an excellent balance of oddball wacko, to someone you feel and care for. Whether this is actually conveyed as well as it could via the game is a tough call, as some cut scenes lifted from the show are rather vague if you’ve not followed the series. This brings me to the issue about who this game is going to appeal to. For fans of the series, I say this is a must have game, simply because it delivers a Naruto experience that is unmatched and so true to the source material. For gamers looking for an adventure/fighting game, but with no knowledge of Naruto (the TV series), then I still think the game has lots of appeal. I would say you’d still have some enjoyable times, but to be frank, not as enjoyable as if you had watched a few episodes first. As I said, I think this is largely due to the fact that the game does not present the full picture of the Naruto character, and so you get a glimpse of what he is like but not enough to really feel for his plight. If you can over look this, and just get on with the adventuring/ fighting, then I am confident you will enjoy the play experience based on the game’s merits of providing a very solid hybrid game.