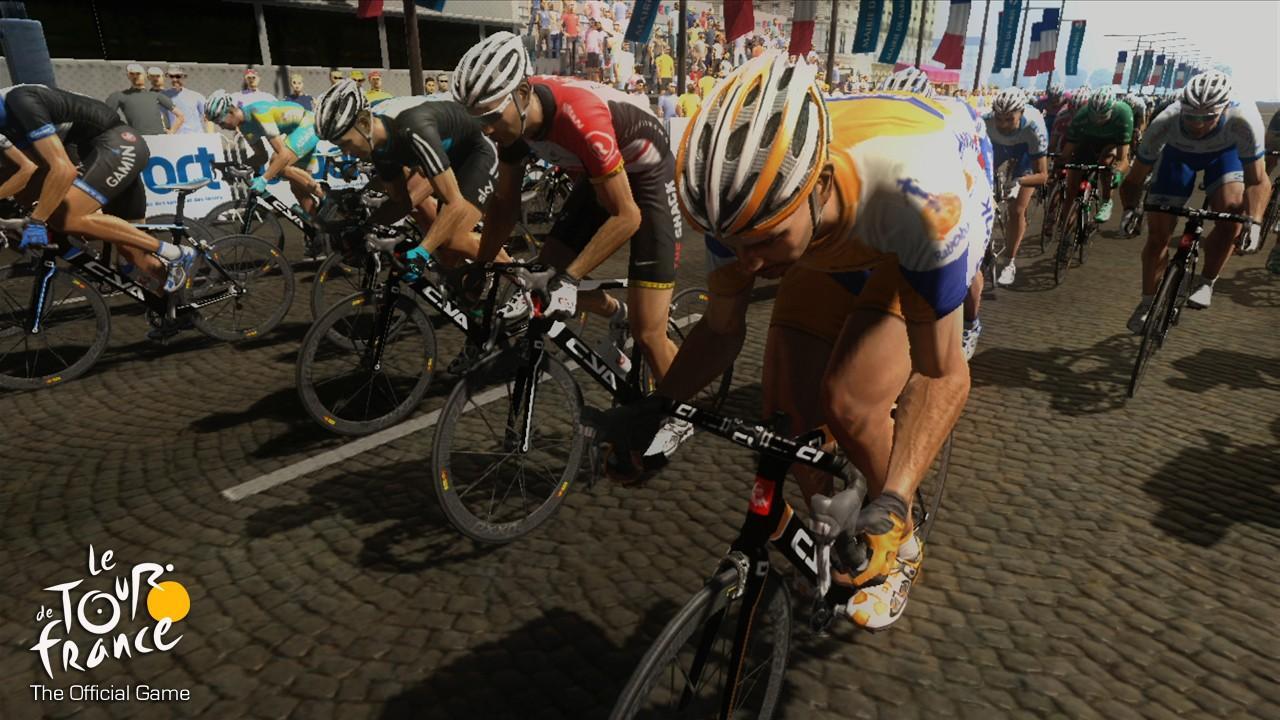 Following on from this year’s actual Tour De France comes the latest video game version aimed squarely at devout followers of the annual sport. For the uninitiated, this simulation style racer will have you hammering buttons and issuing orders to team mates in a bid to win the coveted yellow jersey.

The game is broken down into three simple modes of play, ranging from online racing to playing single stages or the full blown 21 stage event. There is little in the way of tutorial bar a section which outlines the nuances of the two styles of event. This is a shame, as a little more hands on explanation would have benefited greatly.

When selecting a race, players are tasked with choosing a team of 3 riders who can come from any country. You’ll see favourites and British stars such as this year’s winner Bradley Wiggin’s alongside Mark Cavendish and Chris Froome on the SKY UK team. Six other riders of your choosing are also placed within the team and then you’re presented with a choice of which rider to use for the current section. A handy topography chart gives indication of the terrain, which helps in making a decision as to which riders to have on the team. Each rider comes with a distinct set of skills, with some being better suited to sprint finishes and others gruelling hill climbs. There’s a definitive tactical edge where some knowledge of the sport is certainly a bonus.

Once the game begins and depending on whether the stage is a time trial or full race, you’ll either ride alone, or become embroiled in the mass of 198 riders. Time trial offers more control of steering and has players tapping the A and shoulder buttons to adjust speed, whereas full race has a more automated approach. There’s an element moving at a steady pace and thrusting forwards in short bursts. It’s less apparent in the time trial mode but becomes a feature in the full race.

With 198 riders on the track the idea is to gain good position as a team giving a greater chance of success in the final stage. There’s a system of calling out commands to riders on your team to enable tactical approaches to the race but this is not explained very well and takes a fair bit of learning to actually understand what is happening.

Tour De France does manage to capture the feel of the event, but sadly is let down by several annoyances. The game itself is simply extremely slow paced to play, it’s stuck in the middle of sim and arcade where neither excels. On the one hand, the hands on approach of arcade play seems fitting, yet in practice is a tedious exercise in either holding down a button for an eternity, or tapping one. The game would have been far more accessible had it allowed for more automated control, being able to switch riders mid race, and the option to see positions all times. It’s great there’s an option to skip sections of stages, but this in itself is a tiresome process to watch that harks to simulation more than arcade.

Tour De France offers some slick presentation via its menus and interface, yet, the in game graphics are dull, washed out and lifeless. There’s little attention to detail, and things like spectators are poorly realised. That said, the feel of having masses of riders on screen at once is handled very well and looks authentic with plenty of detail on the riders themselves, yet where it really matters such as speed and control just feels painfully slow and unpolished. The audio is also annoying, with long events to cycle through and the same looped tunes and spectator sound effects to the point of sheer annoyance and a fast trip to the menu to turn them off or down.

With a multiplayer mode that boasts few to no players to mess around with means that fans are going to have to snag a few online friends and team up to get any benefits from the online option. All that remains is the individual stage races to play at leisure, or the full Tour De France which if played without skipping sections will take a fair amount of time complete and hopefully win.

Tour De France 2012 is a game that’s really going to appeal to fans of the sport and leaves little opening for anyone new taking an interest. As an arcade game it doesn’t really work and really sits within the realms of simulation which for some people is going to be too long and frustrating. There is a game here, but it’s strictly only viable for those with strong thumbs, lots of patience, and knowledge of the event itself. Anyone else simply avoid.