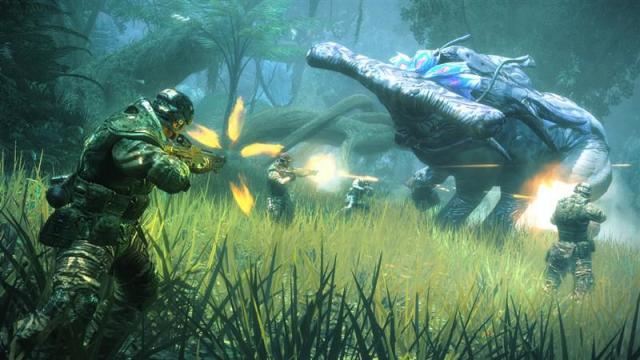 When I first saw 3D in gaming on current gen consoles what seems like long ago with Ubisoft’s Avatar the videogame, I was impressed intrigued and genuinely excited to get my hands on 3D in my home. Ubisoft’s Avatar, whilst not the most impressive game produced some stunning 3D effects that perhaps even to this day is unrivalled. The game presented objects such as foliage that popped out of the screen where you could almost reach out and touch it, coupled with some pleasant depth made the game a lot more immersive and true to James Cameron’s vision of Pandora the fictional world in the movie.

Since then, more 3D games have arrived and as techniques have improved in terms of losing resolution quality 3D should be more widespread and better utilized, and yet, it isn’t. When I first saw Avatar – the videogame on the 3D display the cost was around £5000 for a decent sized TV which was way out of my reach and no doubt the vast majority of people as well. During its early stages, the cost of the hardware was seen to be the sticking point alongside the lack of software to show it off. Well that’s all changed as now we have low prices, more software and a market more accepting of 3D in general thanks to numerous movie releases offering 3D versions. But in terms of popularity amongst gamers it seems 3D has been and is still struggling to become a mainstream option despite more homes owning a 3D TV.

There are some people who find 3D in gaming a distraction, or get headaches and find wearing glasses uncomfortable; but in terms of the actual representation of 3D in games, those people who do try it find it does add something to videogames, more so than what it does when used in 3D converted movies. There are some really good examples of games that have adopted 3D such as Sony’s Killzone 3, Uncharted 3; some of Microsoft’s most popular franchises such as Gears of War 3 and Halo Combat Evolved Anniversary have also dabbled, then there are multi platform games such as the forthcoming Ghost Recon Future Soldier and top sellers like Batman Arkham City. 3D is well represented now on consoles and if you look at what’s available for the PC the list is staggeringly high – but it’s not enough.

Somehow, 3D is still very much niche and whilst there’s a lot more products having it as an option, the marketing is often muted compared to 3D movies. There’s really no sales pitch for 3D games, and in some cases it’s not even known if a game has 3D options at all. In this regard it’s no wonder 3D is not catching on as well as it could do. Sure, Sony have vested interests in getting more gamers into 3D so it can sell it’s Sony 3D TVs, but when the games are not sold on their 3D strengths it’s a really hard sell. Is it frugal for Sony and Microsoft and their partners to then simply sit and wait until more people own 3D TVs by default and then say “look here, try this game in 3D”. Not really, and unless 3D is given a bit more prominence, the situation isn’t going to change any time soon.

There’s also a contingent of haters who rather try the technology simply shy away from it regardless and deem its inclusion in games as a fad that will slowly die out. This could well be true, but only because the people adding 3D to products are only targeting the very few, and not really making any sort of big deal out of it. In this regard, 3D in gaming is a failure, and when games fail to use the technology how people expect (as in having lots of pop out of screen effects), there really is little to be excited for.

Perhaps it’s the limitations of the current hardware that makes 3D a nice option to have for those interested, but not really the mind blowing stuff it could be presented as. Or it’s simply the fact that being so niche has meant that no developer is going to waste more resources in promoting 3D aspects of their product. It’s a shame, as when done right, 3D can be the mind blowing experience people expect. But until there’s some sort of change in how it’s marketed and advertised, 3D is destined to be the little option no one really knows or cares about outside of simply being a gimmick.