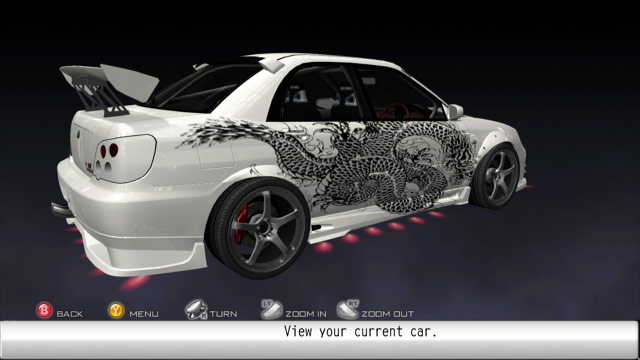 There seems to be a number of games which have depicted the element of illegal street racing and as the activity seems popular with gamers as well, then I guess why shouldn’t there be more games. If you are familiar with Tokyo Extreme Racer which appeared on the beloved PS2 then you might want to sit up and take note as Import Tuner Challenge is in fact a next generation outing for the series. Fans of the originals will no doubt be pleased that the Xbox 360 has been given a version considering it’s the only console where you will be able to play the game and lets face it Tokyo Extreme Racer is rather old now. So does Import Tuner add suitable polish to make it a true next generation game or is it simply Tokyo Extreme Racer in new clothes?

The main onus of the game is to drive around Tokyo’s highways avoiding other traffic and challenging various other racers and gangs that populate sections of the roads at various times of the night. There are three time zones to focus on which includes, Night, Midnight and Daybreak. From your garage where you can tune your chosen vehicle or vehicles with performance upgrades as well as paintjobs; players choose a time zone and then head out onto the Japanese roads. Players are able to cruise the roads at leisure and simply drive until their hearts content taking in the scenery of Tokyo’s highways. However this misses the point as players are supposed to challenge the other racers which appear on a GPS type map displayed on the lower left of the screen. Once a potential racer is spotted (indicated by an icon above the car) players can flash their headlights and start the race. What is different about the racing here is that there is no end point such as a checkpoint or flag. Each racer has a health bar so to speak and what players must do is out drive their opponents and get enough distance ahead until their opponents health bar reaches zero. I think it’s a pretty cool way of racing, even though at times can be frustrating when some racers accelerate into the distance within seconds. At this point it is usually an indication that you should try another gang member or another gang entirely. By winning races and defeating gangs players earn credits which can then be used on buying the aforementioned upgrades. From the offset they are pretty basic, but after toppling a few gangs, more become unlocked and available for purchase.

I think this highlights the game’s weakness in a way as in my play through of over 400 races I used pretty much one car from start to finish (the Nissan Fairlady Z33). In some respects this is a good thing as there aren’t that many standard cars to choose from (all Japanese motors) and creates a bond between player and vehicle; but in other respects means that you end up following a simple formula of racing, winning, racing, losing, upgrading and then repeating the same actions pretty much through the entire game. I guess many racers follow a similar pattern but I guess it just seemed to hit me more whilst playing Import Tuner Challenge. That’s not to say it wasn’t fun as there’s certainly a lot of satisfaction from zooming ahead of an opponent especially one that has acted like the best thing since sliced bread in one of the several parking lots available.

So Import Tuner Challenge offers lots of highway racing and meets at parking lots. The parking lots serve a greater purpose in that players can gather information on other racers. This is crucial for success as certain racers will only accept a challenge if you meet their criteria. So for example one racer won’t appear or accept a challenge unless you have a certain logo on the car or for another example, if you have specific tire configurations. From your garage you have a handy check list which shows you details of who you have raced and beaten to who you need to hunt down and any info you have gained on them. I like it, and it certainly adds a little more flavour to simply cruising the roads and hoping that a racer will be there.

Graphically Import Tuner Challenge looks pretty decent and more importantly runs very smoothly, especially considering the speeds that players will be driving. The cars look very good and with some excellent vinyl’s and stickers available means that no two cars look the same from the 400 plus opponents you will be facing. Sadly there is no damage model available but in retrospect this might have either made the game too frustrating or it could have worked. I have no idea why this feature wasn’t implemented and perhaps the developers tried and figured it took away from the thrill of street racing? On a negative I would have to say that the highway setting does create a racing environment which looks “samey” throughout and considering how Tokyo looks in real life it’s a shame there are only few sections that have much colour. The rest is made up of distant skyscrapers and dull tarmac; perhaps this is how Tokyo looks from these roads? Great for realism but perhaps a little dull for a computer game.

The sound is as you would expect with the sound of engines purring the odd impact effect and little much else other than some racing tunes of which there aren’t many. This is a problem as players will be hearing the same music over and over and if you don’t like Japanese dance tunes then perhaps this might start to annoy. As always players are able to use their own tunes from the Xbox 360 dash or mute the in game beats depending on how you play. Entering the parking lots to speak to the other racers, players are presented with a silhouette of the character and text based conversation. This is a little disappointing and could have added a lot more character to the game if voice actors were employed; perhaps for the main characters only?

Having completed the entire list of gangs and non affiliated racers (wanderers) I can say that Import Tuner Challenge does offer plenty of hours of entertainment. It’s no easy complete in a weekend game and will take average players a long time. The problem as outlined earlier is that the game play follows a distinct and rigid formula and offers an experience that is highly repetitive. For a bonus and change of pace perhaps, players are able to take their skills online to test their mettle and again offers more longevity to an already long game.

I enjoyed Tokyo Extreme Racer on the PS2 many years ago and was surprised that Xbox 360 was getting its own version. Sadly Import Tuner Challenge doesn’t re-invent the wheel and feels exactly the same as Tokyo Extreme Racer. This isn’t necessarily a bad thing although I do feel more could have been added other than the obvious graphical upgrade. With games like Need For Speed available I think Import Tuner Challenge has some serious rivals to contend with especially with Need For Speed Carbon upon us. That said, Import Tuner Challenge has some charms of its own to make it stand out although I do feel it’s only going to appeal to purists and fans of the originals such as myself. In reality there simply isn’t enough here to gain many new fans as far as I can tell and with its roots firmly fixed on Japanese cars means that anyone not interested in the Japanese street racing scene might be put off. If you simply like racing and customising cars regardless of setting then Import Tuner Challenge is well worth a look especially considering the playtime required to complete it.