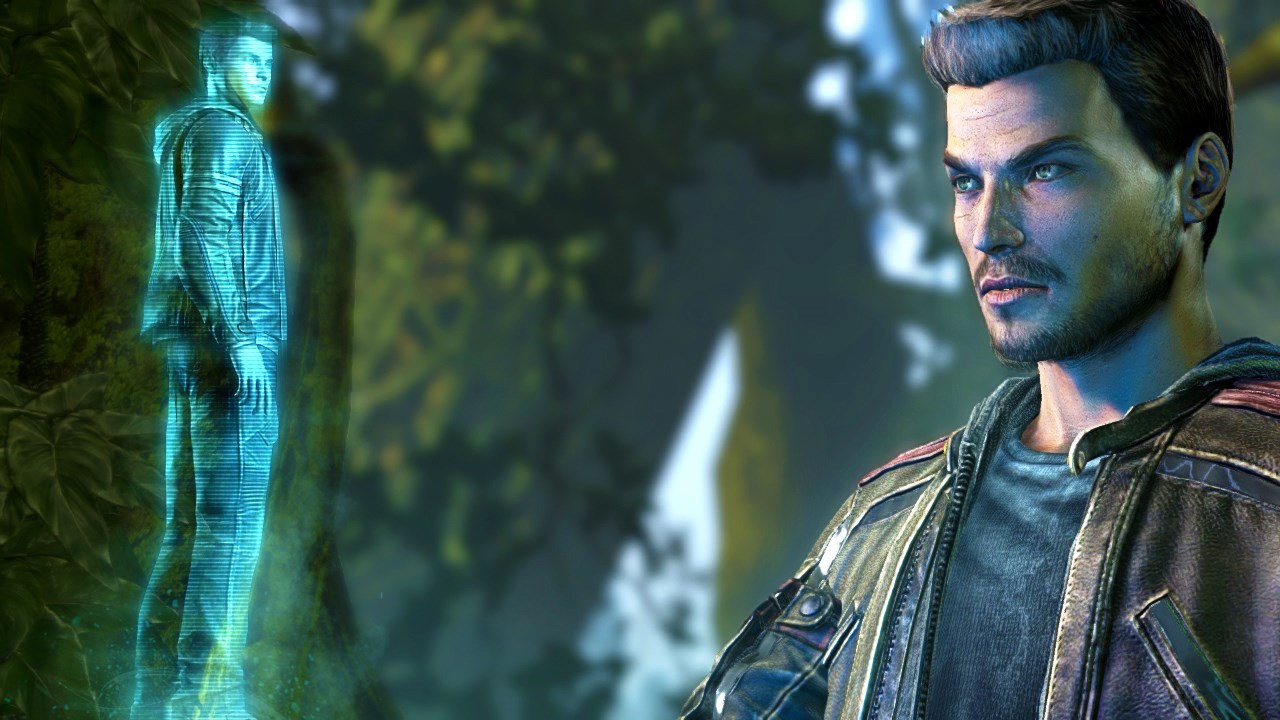 We take a look at Ubisoft’s remake of the 1992 classic game Flashback which is available now on XBLA, PSN and PC platforms. The game isn’t supposed to be a re-write but more the vision the game’s designer had back in the 90s with a lick of current gen paint. How well does the game stack up to its peers and is it worth the £7.99 asking price.

Today we’re taking a look at Ubisoft’s remastering of the 1992 Amiga classic Flashback which has been developed by the original game designer, Paul Cuisset, with his studio,VectorCell. The game retains the pace and flavour of the original game, but injects the visual style more fitting with current generation systems. VectorCell are clear that this isn’t a remake but more a re-imagining of the original idea Paul had but couldn’t realise due to limitations of the hardware back in 92. So how well does Flashback 2013 stack up among a slew of similar games we’ve seen over the years.

From the offset, players take on the role of Conrad B. Hart, who is an agent for the Galaxia Bureau of Investigation, who uncovers a plot to destroy the earth by shape shifting aliens that have disguised themselves as government officials. However, having lost his memory, players guide Conrad on a journey to regain his memories and thwart the alien invasion.

The gameplay is pretty simple, but true to the original game, although there are a few differences. Players guide Conrad through a series of levels where he jumps, climbs up to ledges, platforms, rides lifts and shoots any opposing forces. The controls while making sense for the game, do feel a bit cumbersome, and when combined with some stiff animations makes for a less fluid game than it could be. Players have to press up to reach higher ledges in a context sensitive manner for example and this action isn’t always smooth, throw-able items such as grenades seem more fiddly than they should be .  The same can be said for rolling off platforms or jumping which is awkward in terms of animation and response. If players can work with the controls – which isn’t that hard – then the multi tiered levels are pretty fun to explore and navigate. There’s a few puzzle type moments thrown in for good measure, in terms of progression and even an open feel to the game, but there nothing too taxing to make for any frustration leaving the game running pretty smoothly. There are moments where cheap deaths rear their ugly heads, but with hindsight there’s scope for moving on quickly – in this regard the game doesn’t drag its heels.

The combat consists of shooting and tossing grenades at enemies whilst using a shield to deflect incoming fire. There’s a bit of melee and stealth thrown into the mix, but with pretty unchallenging bots and humanoid enemies, who come with little variety, it’s easy to blast through the game with a quick trigger finger. Some morphing enemies become the mainstay later on in the game and these offer the most awkward of combat moment as players roll and jump away and then open fire once they reappear. It gets old rather quickly and is the one element that drags out and lowers the tone of the experience.  There’s a levelling up system on offer, where points can be spent on improving Conrads combative skills, although it’s perfectly feasible to ignore these entirely.

Flashback really doesn’t pull any punches when it comes to graphics, and when compared to the original game, the differences are massive. The game’s looks are perhaps the best part of the experience, however as mentioned, the stiff animations aren’t quite up to par for a free flowing gaming experience. There’s some unpolished moments, especially the laughable death scenes which have Conrad still alive and running to his Death after being killed.

The game’s audio fares better with some excellent spots of music and many moments where the ambiance of the levels shines through. Sadly the aural painting is tarnished by some pretty lacking voice performances, which do their job but lack any sort of emotive quality – so if you’re interested in reliving the Flashback story, then be prepared for some dire delivery. Aside from the story elements, all other sound effects are loud and work well in context of the game.

Flashback isn’t the longest of games where a few hours here or there and the game is bested. On default Normal difficulty the game is quite easy to plough through, and whilst entertaining, not really offering much incentive to replay again. There is an added difficulty, some in game VR challenges to mess around with, collectibles ,  a new game plus and leaderboards to compete against — all on top of the original Flashback game, although this is ruined by not being full screen and having no music due to not being granted license to use the original score. Either way, there’s enough for die hard players to return to the game but perhaps not enough in game content for those playing through once.

Flashback is cool game in looks and concept  that is ultimately let down by some awkward controls and gameplay elements that could have been better implemented. With a bit more core content, the game could have extended its presence, but as it stands, it’s a short experience not likely to entice players beyond a single run through. For nostalgia’s sake it’s worth a punt, but some elements such as the voice acting might leave you a bit underwhelmed. The price might seem right at under £8, but in terms of value there’s enough here to get your monies worth – but that will largely depend on how big a fan you are.