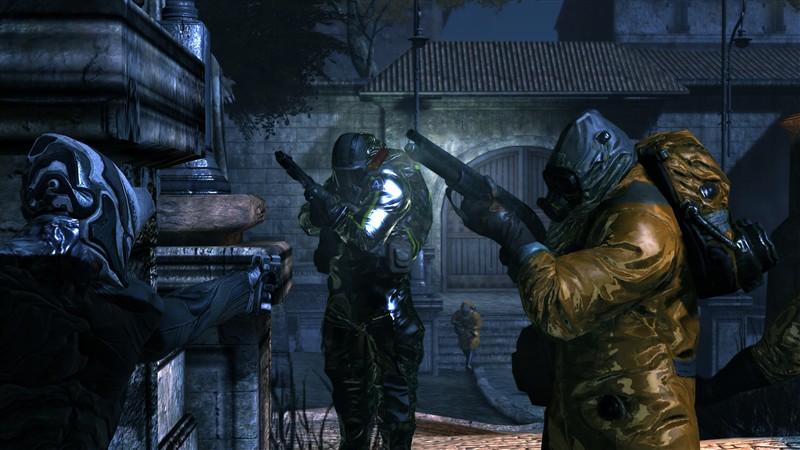 Digital Extremes has been responsible for some good games over the years, what with the Unreal games on various systems as well as the highly ambitious and somewhat over critically reviewed Pariah on Xbox. Well Dark Sector is the team’s latest creation and features a special ops character called Hayden Tenno sent in to do some dangerous (as you would expect) wetwork against a scientist who is developing an extremely potent virus. The virus has been unleashed and the local vicinity (Lasria – Eastern Europe) has been contaminated. Unfortunately for Hayden, early on in the game he confronts the crazy scientist and is infected with the deadly mutating Technocyte virus. Rather than go downhill from here, Hayden becomes a more powerful human, and so rather than reject his new strength, he embraces it so as to exact his revenge on the scientist and his band of mutants.

Dark Sector is a third person action game that could have easily worked in either first or third person modes. The game does borrow elements from a number of other similar third person experiences such as Resident Evil 4 and Gears of War, but this helps to make things feel familiar, rather than leaving you feeling it’s a complete rip-off. To begin, the game is pretty normal and teaches you the nuances of the cover shooting mechanics using conventional firearms. That’s right, you’ll get to use Assault Rifles, Sub-Machine Guns, Pistols, Shotguns and grenades and can lean up against solid surfaces, pop out and shoot and duck back again. Pressing the trigger button will enter a precise aim mode which brings up a reticule for better aiming; naturally headshots are going to cause more damage than shooting at torsos and limbs.

During the early stages of the game, you’ll face human adversaries (dressed in Hazmat gear). Their AI is reasonable and although far from perfect, can sometimes surprize you with signs of intelligence. Naturally they’ll take cover and move about a lot, but at times they distract you on one side whilst a shielded character sneaks up and smacks you around the head. I thought this was quite a clever tactic, but generally meant I needed to prioritize my targets more effectively.

Not long into the game you’ll meet the mad scientist and become infected with the virus, it’s here that the gameplay changes somewhat. Hayden is instantly granted what the game calls the “Glaive” which is actually a three bladed throwing weapon ( kind of like a very sharp frisbee). The Glaive opens up all manner of gameplay differences and means you’ll be able to switch on the fly between using the Glaive and your conventional arms. A simple tap on the d-pad allows you to switch, and I must say later on, this is crucial as the Glaive is only effective against certain enemy types. What is good when using the Glaive is that Hayden has his pistol drawn as well, so if you are being outnumbered or the Glaive hasn’t killed in one hit, then you can unleash a volley of bullets to finish them off. You can also use the Glaive as a melee weapon when things get a little too close for comfort. What is good here, albeit a little unpredictable is the option to perform finishing moves on victims. You can sneak behind them and attack for an instant kill or damage them enough first before unleashing the attack. Either way you’ll see a cool animation of Hayden gutting, and slashing off limbs etc.

Dark Sector features another element to the gameplay that goes beyond navigating enclosed areas or more open environments. The pathway is always very linear, but you’ll at times have to figure out what to do and/or where to go next. There’s a very trial and error element here, and despite the game’s linearity you can be left scratching your head at times due to the general vagueness on offer. There’s a puzzle element with the Glaive which is completely staged, and often requires you to power up the Glaive with an elemental such as fire, electricity or ice and interact with the environment. There’s other times you’ll have to use the Glaive’s after touch feature to hit switches on the other side of fences, to progress. It’s fairly easy stuff to figure out, yet I’m on the fence as to whether the puzzle element slows the pace of the game down and is a hindrance to all the action.

You’ll also have to tackle a number of bosses which require a certain method of killing, not always using the Glaive but more often than not, using your head and seeing what’s available in the locale that you are in i.e that RPG lying there is going to be useful against the helicopter which is attacking me!

Graphically Dark Sector looks very nice indeed, with some great texture work excellent lighting and shadows. Sadly the characters – most noticeably the mutants, whilst highly stylized don’t look as great and feel somewhat generic looking. Dark Sector certainly has a lot of atmosphere within its closed and open environments, but remains as the title suggest a very dark game throughout. You will get some moments where you’re outside and things are a little brighter (despite the onset of heavy rain) but for the most part you’re alone and confined. The other characters in the story look pretty decent but again fall into the realms of generic overall. To be honest I gave up on the actual story element not long after Hayden was infected. The story cut-scenes although well produced didn’t really convey the story too well and seemed an inclusion without proper direction. The game will suddenly enter a loading screen at weird moments and the chapters at times seemed to drag on unnecessarily this could have been handled a little better – even something like the old Resident Evil door animations would have been better in my view.

The sound is generally suitable for the type of game Dark Sector is, which means you’ll hear a lot of banter over the headset from your superiors as well as banter from the human enemies. The music is more for effect than producing any emotion within the player, and you’ll generally feel in the thick of it during gun battles. What is nice although could annoy some players, is the screams of pain from enemies who have had limbs sliced off from the Glaive. Hayden is voiced by one of the actors from the Smallville series and whilst it’s nice to have professional voice actors, it really doesn’t help Dark Sector as the game is fairly cheesy in the dialog department. With all the action, it’s not really a story based game where you’re going to be getting into the depth of the characters. This also means you’ll have to put up with the typical English speaking Russian style accents for the most part of the game as well.

Dark Sector offers a reasonable length campaign and for achievement hunters at least, a fair amount of replay value. Dark Sector offers a difficulty system that auto tailors itself to the skill of the player. This means you’ll find things either a little too easy or perhaps somewhat overly difficult until you continue a few times. There’s an additional difficulty to unlock once the game has been beaten. More replay comes from finding all the upgrade items and then tailoring your play with different combination of weapons/upgrades. I guess only the real hardcore players are going to do this but it’s still something to mess around with.

What seems to be the norm these days is the inclusion of a multiplayer mode for players to duke it out online or via system link. The modes are very similar to those seen in Ubisoft’s Far Cry Predator and only have limited appeal due to the fact that a lot of gamers are playing the main online games still like Halo 3, Cod 4 and R6 Vegas 2. That said, if you can get into some games with a number of players in then of course there’s some fun to be had here.

I’ve had some good times with Dark Sector, but at some other moments felt hopelessly bored due to the repetitive nature of the game. Sure, all games are repetitive, but it just felt more so to me in this game. The Glaive is a good idea and works really well with the conventional combat. I wonder how different the game would have been if you’d have been forced to use the Glaive only? I think I’ve come away from Dark Sector feeling as if there’s certainly room for improvement here. If they’d have included some new elements to proceedings (beyond the Glaive itself) then gameplay could have been a little more interesting and less generic. Also the story could have had a better script that involved the player more because to be frank, I had no real attachment to Hayden or the people he was trying to kill or save.

In closing, Dark Sector is a decent action shooting game that will appeal to those gamers who like a little thinking with their blasting. Not only does the game look very nice it has a certain charm that should win you over. I think for prolonged play sessions, the cracks begin to appear, but if you’re a casual gamer then it’s certainly a game to dip in and out of with out losing too much of what you were doing the last time you played. A good effort all-round, just in need of some refinement to propel it beyond being good to very good.