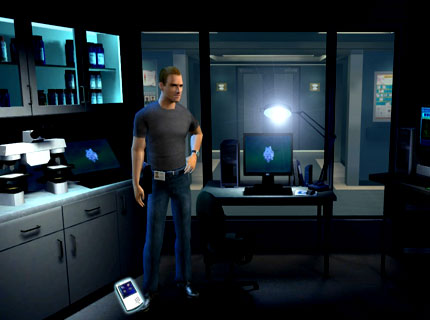 Ubisoft released a CSI (Crime Scene Investigation) game on the PC several years ago and then subsequently a version was ported to the Xbox. The game received a mixed response, and whilst it was true to the TV program, the point and click style harked back to the old school games where the genre was pretty popular with games such as Broken Sword, Myst and Discworld reigning supreme.

CSI: Hard Evidence, if you didn’t know is based on the popular TV series which has had several spin off programs based in various parts of the US. Hard Evidence is based on the original Las Vegas setting and puts you into the shoes of newcomer investigator tasked with solving 6 cases (one tutorial). As a CSI agent, you have to look for evidence and piece together the clues to solve the case.

Gameplay is probably not what you are expecting in this day and age of gaming, because in game you do not control a character per se but a general fixed viewpoint which can pan around various locations such as the CSI Labs, Morgue, Crime Scenes and various other places that your investigation takes you. Movement is handled by simply moving a pointer to an area on the screen which indicates that you can go there. Controls are pretty easy to pick up and most of your interacting is via the on screen pointer which changes depending on whether you have highlighted an object of interest or not. Beyond this you can enter a view screen to look at items you have collected and your case notes.

The real crux of the game is fulfilling the role of detective and simply acting like one by interviewing potential suspects and having a keen eye looking for evidence. Once this has been accomplished, simply heading back to the labs to process the data – such as blood samples, fingerprints and other suspicious substances (some of which are of a sexual nature -ahem) usually brings you closer to solving the cases. It all seems in keeping with the TV series, and whilst the game is very slow paced it does require some effort in the thinking department; if you do get stuck, then resorting to trial and error can, and will yield results as long as you are thorough enough. It’s not overly difficult and there is an option to ask for hints from your sidekick (one of the actors from the TV series).

Graphically, CSI: Hard Evidence is not going to win any awards and whilst it does a decent job of immersing you into the game world, the general level of detail is not really as good as it could have been. The developers might have provided a more presentable experience by using actual video footage but I guess this might have proved too costly? The character models used for the various CSI Agents that fans will be familiar with are fair, but nothing too special either, and with Xbox 360 games constantly pushing the boundaries with facial expressions and more realistic looking characters it does seem that corners were cut in recreating their likenesses.

Sound wise, the game presents a pretty uninspiring soundtrack and some equally uninspiring voice overs. I guess the type of game doesn’t really require a thumping sound track, but the ambiance is just simply too lacking in flavour to grab you and pull you in further. There are going to be a lot of quiet moments during your play time and I guess this is to help you think rather than distract you from the tasks at hand. I don’t know, in this case I might have actually preferred the distraction.

CSI: Hard Evidence isn’t the longest of games and with a keen eye and some patience you can probably beat the entire game in an afternoon. However to add some replay value, there are ratings for each case depending on whether you used hints or whether you searched thoroughly. There are also bugs you can collect to unlock bonus content. I think the real problem here is that the achievements (of which there are only 5) are the most lacking in any game thus far. This is frustrating considering they could have added more, such as getting top grades or by finding all bugs, completing the cases without using hints etc. It seems to me that games with easy achievements are going to sell a little more than they deserve, simply because gamerscore hunters will play the game for the points only. The major problem with game’s like this is the fact that once you do beat them, there is no replay value considering you have done everything the first time through. The developers of these games should really consider adding a random element to proceedings where in this case, the suspect changes each time you play or better yet putting the player into the shoes of the killer with the aim of covering your tracks as best as possible – maybe incorporating two player options with this mechanic in mind?

CSI: Hard Evidence is a game that is going to appeal to the most die hard of CSI fans and dare I say it, wives/girlfriends who wouldn’t normally enjoy your typical video game. The sheer brevity of the game does it no favours, and considering it has a retail price the same as any other game, seems a bit of a liberty. Had this game been released at a super low budget price then perhaps credit would be given, but to expect gamers to part with their hard earned money for an afternoon’s playtime is really uncalled for. There is some sort of fun in here somewhere, especially if you are tired of the usual games we expect from consoles, but it’s all too short lived and totally uninspiring. I would recommend that you avoid buying this game unless you would like to keep the wife/girlfriend entertained for a few hours in your absence. However I’m pretty sure she could probably find a million and one other things to do with the time that are far more gratifying. CSI: Hard Evidence is a rental at best and will most likely be rented by fans and achievement hunters.