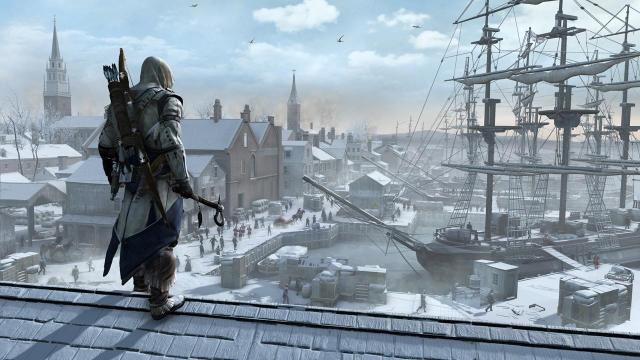 We’ve posted a slew of details about Assassin’s Creed III after the worldwide embargo lifted yesterday which you can view over here; but what of our impressions of the game from what we’ve seen thus far from our behind closed doors look at the game in action? Aside from a rather cool rendered target video, we witnessed some gameplay elements which have restored our faith in a series which to be frank, was getting a little stale. As much as we love Ezio and his Ottoman antics, the over-familiarity of the style was getting weak considering Revelations was essentially Assassin’s Creed IV. So how do we get back to Assassin’s Creed III then? Well, to begin we had Assassin’s Creed, the original vision, we moved into Assassin’s Creed II followed by Assassin’s Creed Brotherhood. Finally we rested at Assassin’s Creed Revelations which told the final chapter for the character Ezio Auditore who had lead the game since Assassin’s Creed II. Assassin’s Creed III steps forwards in time and heads to the North American cities of Boston and New York at a time which is described as the great American Revolution of 18th century around 1775-83. Rather than go into details regarding this time in America’s past, you can head on over to the rather informative Wiki and get up to speed on the events that happened.

What’s interesting here is that this period lies just before the more popular wild west era by almost one hundred years, so it’s interesting that Ubisoft decided on this gritty period as opposed to more conventional times. However, what with Red Dead Redemption nailing the wild west flavour, and even games like Call of Juarez dipping its fingers in the same pie, the great American war hasn’t been covered, so makes for a welcome setting indeed. Now when we first heard about the direction Assassin’s Creed was going to take, we were a little tentative and perhaps wishing for a setting in feudal Japan, or even more recent times in one of the great World Wars; however having now seen the direction first hand and what Ubisoft are doing with the gameplay the setting feels like a very natural evolution for the series.

The settings of wide city streets populated with lots of people who interact a bit more with the character this time, children, dogs and random events which you can participate in or ignore, a real hustle and bustle rather than the mindless drones of past games. There’s almost a Fable like feel to the game world and this is quite a real comparison considering Fable III is set with similar themes although over the other side of the pond. There’s enough opportunity for stealth and action sequences in the cities, and what we enjoyed was a chase scene which showed off new mechanics such as entering interiors, jumping on moving carts to make a quick escape from pursuers. Whilst the town gameplay is likely to offer similar thrills to its predecessors, the distinct mobility of the character, the populace and the towns themselves look like making for more engaging play arenas. To add another layer to proceedings was the showcasing of how not only night and day is presented, but also changeable weather that offers gameplay nuances rather than simply being cosmetic. Fog for example is likely to aid in stealth, whereas ice and wetness could hamper fast movement when being pursued. It seems like Ubisoft’s new AnvilNext game engine allows for a far greater level of details which we’re really excited to explore.

Outside of the city based gameplay, we see a return of more open plain which this time features a massive wilderness some 1.5 times the size of Rome from the previous games. It’s a sprawling area where a third of the game’s missions will take place. There’s wildlife, camps, settlements, and the element of being alone in the wilds with nature. Every rock, tree, escarpment can be climbed and interacted with, making for an impressive sight to behold. Not much was really shown here other than the tracking a of fallen victim and facing off with a bear which randomly attacked. One major part of the wilderness was the inclusion of snow, which when deep hampered movements but also suggested that with changeable seasons, the lye of the land could also change. The wilderness looks like a wonderful contrast to the city based gameplay which will be interesting how it is filled in terms of side missions and distractions – other than hunting animals for their hides.

As for the main character, We’re presented with the British/Native American Connor. Not much is known about his origins other than his family and possibly his tribe were wiped out by the fighting Americans. Ubisoft have kept tight lipped over the story here, but obviously fighting a fight against oppression is a good cause and being part British allows for allegiances with one of the warring factions. What’s interesting is how rather than lose the identity of the series, the designers have kept Connor’s look in keeping with what’s expected. So that means you’ve still got the white peaked hooded outfit that almost looks like the same as his predecessors, but with styling befitting of the time period so that he at least looks a part of this world. Were not sure how the Animus sections will play a part or how they will actually play this time, but according to the demo there is likely to be less of shift away from the world created. In a nutshell, Connor is as likely a hero as any of the past protagonists, he has the moves, a motive, and when it comes to combat and stealth, his American Indian roots make him perfect for the role.

So onto the gameplay. What was demonstrated was a huge battle where hundreds of fighting troops faced off with each other. Here we were shown some more stealth based actions where plotting a course between rounds of fire, taking cover and blending in amidst charging cannon fire was the order of the day. The same gameplay of hunting a particular target was showcased, and with new stealth elements such as hiding in foliage and climbing trees and being able to move across branches effortlessly, using the leap of faith into moving carts looks set to offer plenty of opportunities. The combat takes on a more visceral approach as the enemy’s main weapons are guns. You have the element of ranged combat with a bow, or a bit less stealthy with a musket, and then, close quarters with a pistol, tomahawk and the classic hidden blade. A new hook rope weapon was shown which allowed for pouncing attacks from above, making for an interesting dynamic. The combat was probably the best part of the entire demo, and whilst the whole scale and ambience of the game is incredible, the actual fighting – a weaker part of past games – at least looks a lot more engaging and dynamic this time. We were shown how kills in quick succession were easily performed, making for highly cinematic scenes, and when finally killing the target a great sense of pride in how events leading up to the final moments unfolded.

The Assassin’s Creed series really did need a dose of fresh legs and from what we’ve seen thus far it looks like Ubisoft has the vision to make the series once again feel exciting and worth waiting for. With a bigger development team, several years in the making and some interesting historical facts thrown into a game world filled to the brim of character; and you’ve got one hell of a game that left us begging to play it. Luckily the wait isn’t going to be years but only until October, which is simply amazing. Expect more from Assassin’s Creed III during E3 and Gamescom this year, and of course we’ll provide more impressions and related content as and when. One thing is for sure, Assassin’s Creed is back with a vengeance in what is probably going to be the best of the series to date.