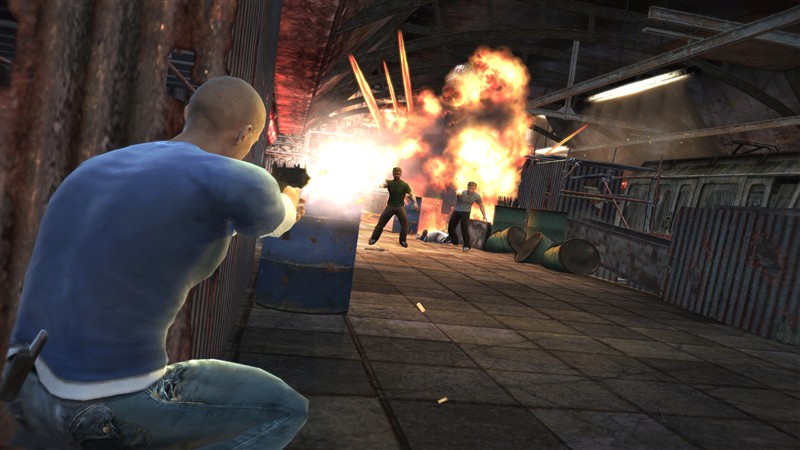 Actor Vin Diesel gets around a lot, and has made no secret of his passion for video games. The star of movies such as The Fast and the Furious, The Chronicles of Riddick, Triple X, Pitch Black and many more has placed him firmly into the role of action hero. This self esteem is channeled into video games, and why not. It’s a clever move to not be tied to just one medium and with video games becoming ever more popular it makes perfect sense for actors in the movie world to make the transition to video games. Vin’s latest venture sees him take on the role of smooth talking character named Milo, who jets in from Miami to the equally sunny climes of Espanol’s Barcelona. Here, he offers his services to the various criminal fraternities of the city and it’s here where gamers can have an excuse to drive around like a madman shooting and smashing things up in the process. Welcome to Midway’s Wheelman.

Wheelman offers an open world playground to drive/run around in, and therefore features all of the elements that are synonymous with the formula. You’ll have a set story to drive through at your leisure, and a suitable number of side missions that offer welcome distractions. The extra activities go towards helping you upgrade the abilities of Milo. I think it’s safe to say, that Wheelman isn’t trying to be the next GTA or Saints Row, and instead, like it’s namesake opts to provide a more visceral driving experience. Yes you’re able to hop out of any vehicle at will and hot foot it, but the reality is that outside of actual missions, there’s very little to do on foot. The meat of the game requires a vehicle and it’s this that gives the game its own distinct take on the open world genre.

Throughout the story you’ll be introduced to various characters and undesirables, who you’ll end up doing jobs for. As a skilled driver, and smooth talker, you’ll be working for more than one criminal element. I’m not going to ruin the story for you, but will say that it all gels well together resulting in a dramatic climax. Throughout the game you’ll be chasing other cars, shooting other cars, being chased by cars with the occasional on-foot sections where you’ll get to shoot up some opponents in more conventional third person antics.

Wheelman opts to do things slightly differently than its peers, and with the onus on driving means that some handy moves have been incorporated to spice things up a little. The most common move is the use of the right thumbstick when driving. Push this in any direction and your vehicle will shift towards whatever direction you’ve pressed. This feature is used for battering opposing vehicles and means that you’ll be able to disrupt them enough resulting in an devastating crash. It might sound over the top, of which it is, but ultimately it’s a fun mechanic to work with whilst being pursued.

Another neat gameplay quirk is the option to jump from a moving vehicle onto another to either steal the car or just to grab a fresh set of wheels if your current ride has taken too many knocks. It’s unrealistic and perhaps more suited for a superhero game, but is a fun feature to play with in the heat of a car chase.

The final stand out feature to the driving is the ability to spin the car around (once you’ve built up enough of a special meter) and enter a pseudo ‘bullet time’ mode where you’ll be able to focus fire on your opponents. For the most part the feature can be ignored, but there are some moments where its use is vital for success (such as shooting out a driver, or taking out the engine of a well armoured van). It’s all pretty intuitive and easy to master, but I must warn that the enemies themselves are pretty relentless and will continually try and pound you into smithereens no matter how many you take down. I guess it’s using all the abilities that provides the most thrilling and entertaining of car chases.

The side activities are welcome and feature checkpoint racing, destruction runs, taxi driving, courier missions and a whole lot more. You’ll be able to dip in and out of these at will and due to the nature of the game, are all based around driving. There are even collectible cats to find and smash, as well as some death defying dramatic jumps. There’s certainly enough to keep you occupied for some time.

All things seem well and good in the gameplay department when driving, however the game isn’t so polished when it comes to graphics. Barcelona has no doubt been well recreated, yet some of the texture work is horrendous for an Xbox 360 game. Take one look at the posters that feature on a bus stop for example and you’ll see graphics that look right at home on a Playstation circa 1997. It is distracting and shows a real sense of laziness when other open world games seem to put more effort in. Granted you’re more likely to be smashing through bus stops than admiring them but this is still noticeable. There are plenty of other examples as well, but I’m not going to harp on about them.

Milo also runs like a complete twat and it seems that no expense was spare motion capturing the movements of the human body. It’s clunky, stupid looking and again detracts from the overall experience, which is a shame because, the on-foot shooting has been reasonably well produced.

The vehicles look like they have been lovingly crafted as there are some decent vehicle damage effects used. However this does not mask the fact that a lot of the vehicles handle like tanks on ice. There will be occasions where it feels like an eternity has passed as you floor it to get away from a standstill. Sure, you might only have two tyres left, but the game still allows you drive at great speed in this condition – when you finally gain some momentum.

I really loved the soundtrack, as there’s a varied number of radio stations to cycle through. The Spanish tunes really compliment the locale you’re in, and there are some great dramatic scores which drop in during the more intense moments the game throws at you. I think it’s safe to say that for most gamers, they have most genres covered – whether that be classical, hip-hop to euro dance music.

The voice acting is reasonable but nothing spectacular. Vin delivers his lines in the usual husky smarmy tone we’re used to hearing from him and I guess it lends itself well to the character he plays. There’s a lot of Spanish, which is to be expected, and often you’ll have to avert your gaze to the subtitles that drop in when a character starts by talking in English and then switches to Spanish.

All the other sounds effects are what I would describe as being functional. nothing more and nothing less. So be prepared for your ears to be showered with screeching tyres, metal scraping against metal, screaming pedestrians and the usual gun/explosive sounds.

Wheelman offers a reasonable story mode, but I’d say can be completed in a weekend of play.The real longevity comes from completing all of the side missions and gaining top marks for all of them. Hunting all the cats and jumps will also take a fair amount of exploration, and if you don’t use a guide could take weeks of play. Sadly there’s no multiplayer, to draw out the longevity.

The Wheelman is a solid driving game which is perhaps let down by some poor handling (for an arcade game) and some sub-standard graphics. If you can overlook these, then I’m sure you’ll gain much enjoyment from jacking cars, shooting up enemies and generally causing mass carnage in Barcelona. The story is pretty forgettable, but the missions themselves are worth the price of entry with very few moments of frustration. This is a good thing and makes the game very accessible for gamers who want no nonsense driving. For those gamers looking for something more realistic, then I’d say you’d probably be disappointed, but for anyone else who is after a game that puts you well and truely into the driving seat Wheelman is probably worth checking out.