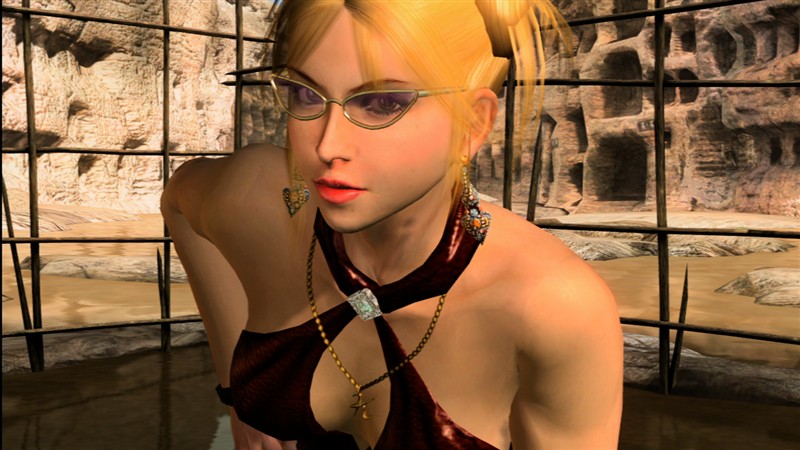 Virtua Fighter 5 (VF5) continues this trend, and with an all new shiny make-over certainly delivers a killing blow to rival and perhaps surpass the other fighters. The big question is, despite being an in depth game, does it appeal to all gamers who like fighting games?

To begin, as with any fighting game, the first place to visit is of course the training area, especially if you are a new comer. It’s a good place to get a feel for the various characters to decide which one not only aesthetically suits you, but play wise is going to feel more up your street. For me I favored the quick nature of Sarah, who is a pretty decent character to start out with.

The Dojo, or training mode, lets you practice against an opponent and also allows you to practice the move set of your chosen character. As you will probably notice, there are a lot of moves available per character, and some are quite hard, no, almost impossible to pull off; let alone string together nicely as part of an attack in a real round. However, the training mode does give you some pointers in how to pull off moves effectively (by showing key inputs and frame data), although for the majority of a characters’ moves, competent players should find no real problems.

It’s kind of daunting at first, especially for the non fighting aficionados, yet you will discover quite quickly that there are many moves that you can actually fight quite comfortably with, without going overly too in depth.

It’s true about fighting games in general, that to truly master them, takes a rather long time, because mastery does not only mean learning one or two characters moves but also knowing some basics about your opponents as well. There are 17 characters in VF5, with one unlockable, and so after messing around in the Dojo it’s a good place to have a bash at the game’s Arcade mode which has two game types. One is a time attack where the rounds, round time etc are set, and as the name implies it’s up to you to beat all opponents as quickly as possible. I’d say for beginners, they avoid this mode and focus on the other game type that allows you to tweak the options a little bit.

The Arcade Mode, whilst beatable, can be a little unforgiving at times and there will most likely be instances of where you are left scratching your head wondering “what the hell just happened there?” Either way, vets of the series shouldn’t find too many issues and of course, they are able to up the difficulty if they so choose.

The other main mode in the game is the Quest mode, which featured in VF4. Here you choose a character, make a profile, and then simply head on into a simulated arcade world. There are various arcades to choose from, which house a number of machines and of course AI players. Each arcade has players of varying skills, and so starting in one of the beginner arcades is a good place to learn the ropes. I found these to not be too challenging for the most part, and an excellent means of just getting to grips with the game mechanics. In the quest mode, your character levels up every time you win a fight, although eventually you’ll be forced to fight players close to your own level if you wish to progress further. What is more, there are various items and emblems to collect from winning fights or stuff you can purchase with earnt cash. The items in particular allow you to customize your fighter with various bits of clothing and accessories. The main onus of the quest mode is to collect, and you’ll find that there are simply thousands of potential matches to be fought and won. Another element to the quest mode are the inclusion of various tournaments (against AI of course) and it is here where you can put your skills to the test further.

The other additions to the the package are of course things like watching two AI fighting, viewing replays and checking leader-boards; and let’s not forget the option to go head to head with a friend in your own living room or via the Xbox Live network.

VF5 looks stunning for the most part, and although some of the characters look a little waxy, the general level of detail is probably the best of any fighting game to date. I especially liked the sweat you can see on Vanessa’s cleavage as a good example (yes you can call me a perv all you like). The movement is fluid and there are some really impressive moves to mess around with. Each character has their own fighting style, which range from Pro Wrestling to various martial arts from across the globe. There’s certainly a good mix of moves and with the fast paced nature of game means you should really feel you are “fighting” so to speak.

Beyond the characters, there are some equally impressive stages to fight in, and whilst these vary quite dramatically, they all contain various elements of a Ring. Some are caged/fenced and some are raised platforms which means with good timing, or a neat combo it’s possible to knock your opponent out of the ring for an easy win. I can’t really fault the graphics in this game at all, and whilst you can see some low resolution textures if you look hard enough, the general level of polish is of an extremely high standard and one that can’t really be criticized.

The sound in any fighting game is a little awkward to describe, and considering there is no story attached to the characters, so you aren’t really going to hear much beyond grunts and groans whilst fighting. Ok, there are a few uttered lines if you are victorious, but these don’t really amount to much. So, what you are really left to focus on beyond the sounds of combat, is the music. For me I didn’t really like the music and found it high in the mix. I guess players can choose to use their own soundtracks and if I remember correctly you can actually switch it off if you so desire. What is more, if you tinker with the options, you can have a fight commentary if you choose, which I found ok for a while, but tended to get a little too repetitive.

As mentioned earlier, there’s a ton to unlock in the game’s quest mode and if you want to do this with every character, then you could be playing for 6 months or much more – depending on whether you play for 8 hours a day or not! Beyond this, there’s the Versus mode with friends and of course the online portion of the game. The online is a very competitive field, and whilst some moves are going to be impossible due to latency issues, I found sticking with people closer to home provided the best results because it’s inevitable that you will encounter lag at some point. In ranked matches, you cannot choose and therefore just have to take it on the chin. What is good is that you cannot select your character during ranked fights (you choose beforehand) or see your opponent’s until the fight begins – which eliminates player matching. The game like all fighters has a tier system, where some characters are better suited against certain others. It can get a bit complicated for beginners, and I guess most, non hardcore players probably don’t give a damn about such intricacies!

There’s a lot to do in VF5, which will keep offline players entertained for quite some time, and is always good to break out if you have friends round. The game does have a lot of depth for those who wish to devote much time to learning and mastering characters, but at the same time, beginners can button mash and be reasonably successful – or by learning a few simple moves. The overall look and feel of the game is very impressive and whilst there are no modes, like Team Battle, and Tag, there’s certainly enough to provide a heady dose of fighting madness for newcomers and veterans alike. I really like this game, and I really wish I had more time to learn more characters and go beyond my current abilities. Either way, if you like fighters, then VF5 is well worthy of your time.