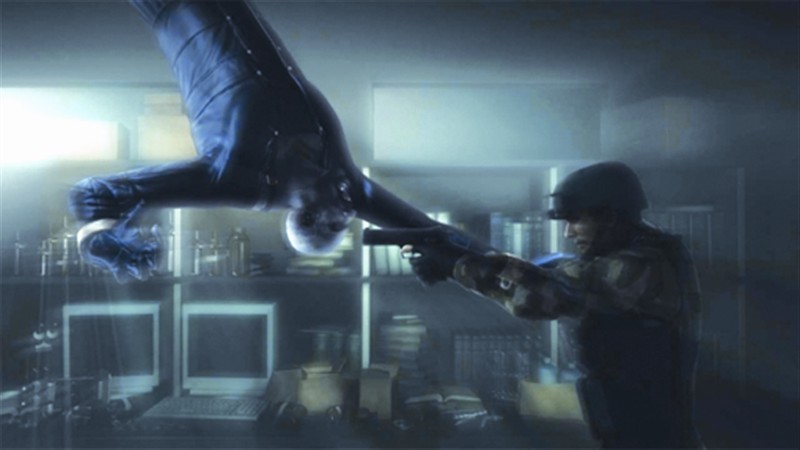 Vampire Rain has been developed by Japanese developer Artoon and features a black ops unit tasked with eliminating the threat of a new breed of Vampires called Nightwalkers who are intent on converting humans into their own kind. The game provides a pure stealth experience with some combative undertones and is decidedly wet throughout. However with the likes of Sam Fisher, Solid Snake and the ninjas of the Tenchu games all providing their own blend of stealth based gameplay, Vampire Rain seems to take elements from each game to provide its own take on the stealth genre.

Vampire Rain is a pure stealth game in the most literal sense. To begin, the game offers tutorial missions which introduce players to the nuances of sneaking around and using the tools available. You’ll learn all the moves necessary to accomplish your goals and these include things like shimmying across ledges, jumping, crawling and using zip lines. There are also handy night vision and “necro” vision modes to utilize with the latter showing you the nightwalkers line of sight (represented on your radar). In fact the tutorial spans several missions and seems to move along quite slowly; so fans looking for instant action moments might be a little disappointed here. Through the game’s story you take control of Lloyd, one of a team of four. He was a lone survivor in another incident set prior to the game and is suitably hard enough to undertake the cleansing operation the team have been tasked with. However other than sneaking around a fair bit, it won’t be until around the middle of the game when you will fully be able to utilize his combative skills.

Vampire Rain presents levels set in the city streets and it’s here that you can freely move around, climbing up ladders, drain pipes and crates to reach the rooftops. The game seemingly offers multiple pathways to reach your objectives which are highlighted on the radar; however in my experience I noticed that even though you are presented with several paths the game only really allows you to go one route (usually the least direct route). The other pathways seem to always lead to a dead end (invisible walls) or an encounter with a Nightwalker with which you have no means to get past or kill.

Let’s talk about the Nightwalkers for a moment. Ok, they are vampires which have more than a slight resemblance to zombies. However unlike their un-dead brothers they have the agility and speed of super humans allowing them to scale buildings in a single leap and more importantly are able to slice and dice you to death in one or two hits. This means if you are confronted by a nightwalker and subsequently spotted it’s instant death. The game lets you know when you have been detected by flashing a pair of eyes onto the screen. This gives you seconds to react before you are fully spotted. Unlike other stealth games Vampire Rain does not allow you to escape from the Nightwalkers once you have been spotted and so game play in the early portion of the story revolves around being totally stealthy with combat a distinct no no, despite giving you weapons – which become redundant tools for merely shooting birds and locks. There is certainly a very unforgiving feel to the game during its opening missions and in my experience I spent a lot of time staring at the GAME OVER screen rather perplexed. The nightwalkers are simply not to be messed with and once I realized this, the game play seemed to make sense. Vampire Rain does not allow you to make a single mistake and if you do then suitable punishment is dished out with the game telling you that “you basically suck, try again”.

So after restart after restart it became clear that Vampire Rain is a game aimed at players who really like to be ghosts when they play stealth games and in this respect it works. Sadly I fear this approach of being totally unforgiving and not allowing gamers to make just one or two mistakes without having to restart the checkpoint may just turn off some players. In Vampire Rain’s defence the game does begin to heat up eventually and when you gain weapons such as the shotgun, sniper rifles and blade can you truly start dishing out your own GAME OVER screen for the Nightwalkers. Later on in the game you face more conventional enemies who still have the Nightwalkers cunning speed but seem to not use them and instead favouring taking cover and shooting. This makes a welcome change of pace and in my opinion I feel the developers got the game all wrong and should have had these lesser enemies earlier on in the game with the tougher Nightwalkers making an appearance later on.

In a nod to Metal Gear Solid there are several boss encounters with weird and more powerful Nightwalker Elites. This friendly bunch have their own unique styles and require more lateral thinking to beat them. Sadly there is simply not enough imagination in these encounters to make them memorable gaming moments and once you have figured out what to do their demise is swift and no where near as challenging as the regular Nightwalker encounters.

Vampire Rain features a lot of rain as the name suggests (this is explained during the game’s story) and so as you would expect there are lots of water effects. Whilst these look merely ok I must say I was impressed with the water effects on surfaces, namely the characters. During cut-scenes of which there are simply too many interfering with the gameplay, you can see the water running off the characters clothing and it does look rather cool. You can see this in game also but is not something you will be staring at for too long. The character models themselves are quite detailed during the cut-scenes but appear less so during playing and due to some rather basic lighting.

The recreation of wet streets and moody interiors is handled quite well and despite being restricted by invisible walls there is a fair amount of scale here. The real stinker is the actual texture detail which looks very sub par for an Xbox 360 game. What could have looked much more believable is in fact rather drab and dreary and seems like it’s missing the polish which gamers expect from this generation of hardware. That’s not to say the game is horrid looking, just well under par.

Vampire Rain also employs some rather dodgy animations and enemy character models, which like the texture detail on buildings and such like is very sub standard. The Nightwalkers movement in particular is very jagged and makes them appear more comical than the dangerous foes they really are. Player movement is also a little stiff and with cumbersome controls which require you to stop between each action when performing climbing movements it’s all very lacklustre and unpolished.

The sound is one of the worst aspects of the game with dreary uninspiring music throughout and some of the worst voice acting I’ve had the pleasure of listening to for quite some time. Actually I take it back, the voice acting is average except for the team leader who has the most lines and is perhaps the worst voice actor ever! His extremely poor delivery really does let down any sense of empathy you might have had with the other characters. It’s like having one guy in a choir singing out of tune.

I also have another gripe with the sound effects and that is the very poor looped sample of rain falling. There’s no real variation here and after a while the rain simply sounds like white noise (similar to when the TV has no signal and makes that horrid hissing sound). It’s very off putting and makes the interior sections welcoming for all the wrong reasons. The general sound effects are pretty poor and there just feels like the atmosphere has been ripped out.

Vampire Rain will certainly test your patience as much as it has tested mine. There is a distinct trial and error element to the game play and this means a lot of GAME OVER screens and a knowing of what’s around the corner in advance on your next attempt. This obviously draws out the game which isn’t the longest by any stretch of the imagination. You can replay completed missions and Vampire Rain also offers side missions set in the game world but are not tied to the story. Like the story missions these give a ranking on completion and are some sort of incentive for going back for more punishment. The side missions are worthy distractions and offer a variety of scenarios to mess around with especially if you like to obtain the highest ranks.

Vampire Rain also features online multiplayer where there are several game types to sample. The most noticeable aspect of the multiplayer game is being able to transform into a nightwalker to attack opponents in the death match mode. It’s relatively fun but not really a saving grace for the game. It’s nice to have a multiplayer option in the game but I fear a lack of players will simply kill the online play.

Whilst it’s easy to draw comparisons between Vampire Rain and the other stealth games out there, I think Vampire Rain offers a unique take on the stealth genre which has been a bit of a gamble for the developers. On one hand they knew that gamers would instantly scrutinize the game and say it’s a copy of such and such stealth game but that’s not necessarily a bad thing. What Vampire Rain seems to mess up along the way is its execution and in copying elements from other games the end result isn’t the mind blowing experience it should be or how it appears to sound on paper.

There’s a lot of rough edges in Vampire Rain and a lot of things many casual gamers aren’t going to like, the insane trial and error gameplay, the lack of pace and some incredibly boring moments to name but a few. Vampire Rain tries to offer a different gameplay experience yet in my mind they have succeeded but in turn have created a game that is only really going to appeal to a minority of patient players. With no options for varying gamer styles, Vampire Rain limits its wider appeal. Maybe this is what the developers wanted? Yet at the same time you can’t help but feel these guys have cut off their own heads before starting.

Vampire Rain isn’t totally bad and if you are a gamer who likes playing stealth based games pure stealth then there is some enjoyment to be had here. With none of the production values of the games Vampire Rain is going to be compared to it’s a shame the developers didn’t have a bigger budget to add more spit and polish to proceedings. In my opinion they should have ditched the multiplayer and focused on getting the single player experience up to scratch first. What could have been a cool game has slipped under the carpet into the realms of mediocrity. Vampire Rain is a rental only in my opinion unless you have more money than sense.