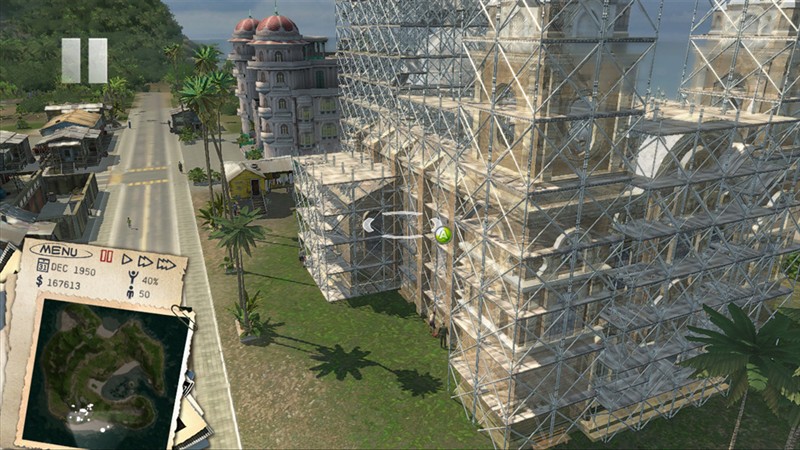 Sim City has so far been absent on Xbox 360 and so this has led to a void when it comes to resource management/strategy/ tycoon games this generation. Although we have been blessed with Civilization Revolution and Theme Park, for those gamers looking for a more deeper experience have had to revisit past ventures on the PC or simply go without. Well Kalypso Media alongside developers Haemimont have come to the rescue with their Tropico series, which for the first time sees the light of day on the Xbox 360 platform. Yet with no mouse in sight and lots of menus and panning cameras, how well has the game ported over, so that gamers using a controller can get the most out of this interesting and somewhat unique game?

The gameplay on offer in Tropico 3 might seem a little daunting at first, but once you get the hang of what’s required for success it then becomes a case of improving the skills you have and looking to expand your horizons. As with any game of this ilk you’ll start off simplistic and as time goes by the challenges begin to heat up as you tackle growing numbers of inhabitants to your game worlds. Luckily some of the edge is taken off with a handy tutorial mission which goes to show the easy to use controls such as being able to zoom in, pan the camera, place buildings and so on; the basics and the foundations (pun intended) for success. With games such as these it’s not just a case of keeping inhabitants happy, although that is the fundamental part of the gameplay. You do have various factions to please and plenty of tools to keep them happy; but it’s the random elements that are thrown into the mix that can really turn the tides in your favour or pretty badly against it. In this case you’ll have the imposing super powers of the USSR and United States looming over you, as well as natural disasters such as earthquakes. The most striking random element comes in the form of rebels and political oppositions. Naturally the rebels will pose a military threat to your regime but the political opponents are a little more subtle and can have you democratically ousted from power just as easily.

You’ve got to keep your wits about you, so that means checking the status of your citizens, making sure they are well accommodated, have jobs, have food and entertainment. If you neglect certain areas then that’s when things can turn sour and the people lose faith in your governing prowess. However, there’s lots of means available, and if you manage the resources of the land well to not only feed the people but export to raise finances then you’re well on the road to success. With cash in the bank you can start to build some impressive almost utopian like cities from the ground up and it’s here where the game offers much satisfaction, in a completely different way to the regular games that rely on quick fix combat or high speed driving. Watching your city grow and run smoothly can be a cause for headache, but at the same time is very rewarding especially once you capture the perfect balance and see the cash come rolling in, where even the most intrusive of actions can be paid off without you breaking a financial sweat.

As mentioned already, there is a lot to take in at first what with various menus and stats to check, but in reality there’s also a certain simplicity about the game, allowing you to ignore these for the most part and just focus on getting your hands on with building and keeping the populace happy. For those players who wish to go that bit deeper then they can turn off the hints and start cycling through the detailed reports for a more in depth experience. The game offers a sandbox mode where you’ll be able to set various parameters making the game harder or easier and then just play until your heart’s content. For those of you looking for some direction there’s the campaign mode which offers a number of scenarios to beat. These are challenging and fun and allow you to get some decent experience with what the game offers prior to letting yourself loose on the harder settings of the sandbox mode.

The graphics are pleasant and whilst not as crisp as their PC counterpart do a remarkable job of conveying the activities of each living person in your world. They might look like ants, but when zoomed in you get a little more insight into the people of your worlds. There’s plenty of smaller details, but in the thick of building your utopia, you’ll mostly be moving around the map expanding rather than spending time focusing on the smaller person. A small gripe to mention is the placement of buildings and roads which can sometimes be a little more fiddly than necessary. Also for those of you wanting precision with placements you’re out of luck because sometimes you’re not going to always get your buildings parallel to your roads and such like, which is a shame but in no way a deal breaker. One neat effect is seeing the transition of day to night and the arrival of stormy weather in real-time. It certainly adds some realism to proceedings.

There are some fitting Latin tunes on offer, although considering the number of hours you can potentially be playing they do begin to repeat a little too often, to the point where you might want to turn the volume down and just keep the sound effects on. There’s few other sounds other than spot effects and a semi annoying announcer who will fill you in on happenings and the general sentiment of the people. There’s nothing to really fault here other than perhaps there being a need for more music to listen to as you build your way to success or failure.

Unlike other more action orientated games, there’s perhaps more gameplay hours to be had in a game like this than most. Although you can tailor the game speed to your liking, to start from scratch and build to finish does take a long time, and before you know it the hours have passed and it’s bedtime. The scenarios will take some time to beat them all and then there’s the inclusion of the sandbox mode which offers plenty of islands to populate and a number of game enhancing effects for you tune. Even when using the same locale more than once, how you play can change depending on the decisions you make and how you prioritize your spending. There’s really more than one way to rise to success meaning replay value is very high.

From the offset Tropico 3 is at an advantage as there’s no competition for it on Xbox 360. However, that doesn’t mean the game rests on its laurels so to speak as what’s on offer is solid and challenging entertainment. For gamers who lack patience then perhaps this is going to be a little too slow paced and taxing for you, but for those of you willing to give something different a try then you’ll definitely come up trumps here. Tropico 3 is a rewarding, well designed game that offers hours of joyous entertainment. If you can handle the over abundance of Latin flavouring then there’s no reason for you to not gel with the scenarios on offer. If it’s value for money, replay value and a chance to show off your tycoon skills, then Tropico 3 is the top dog and well worth the investment. It’s uncomplicated, easy to fathom and every bit as rewarding as any other game and then some. The pride you gain from starting in the gutter and working you way up is second to none and worth the price of entry. If you’re an Xbox 360 strategist or megalomaniac then get this game as you won’t be disappointed.