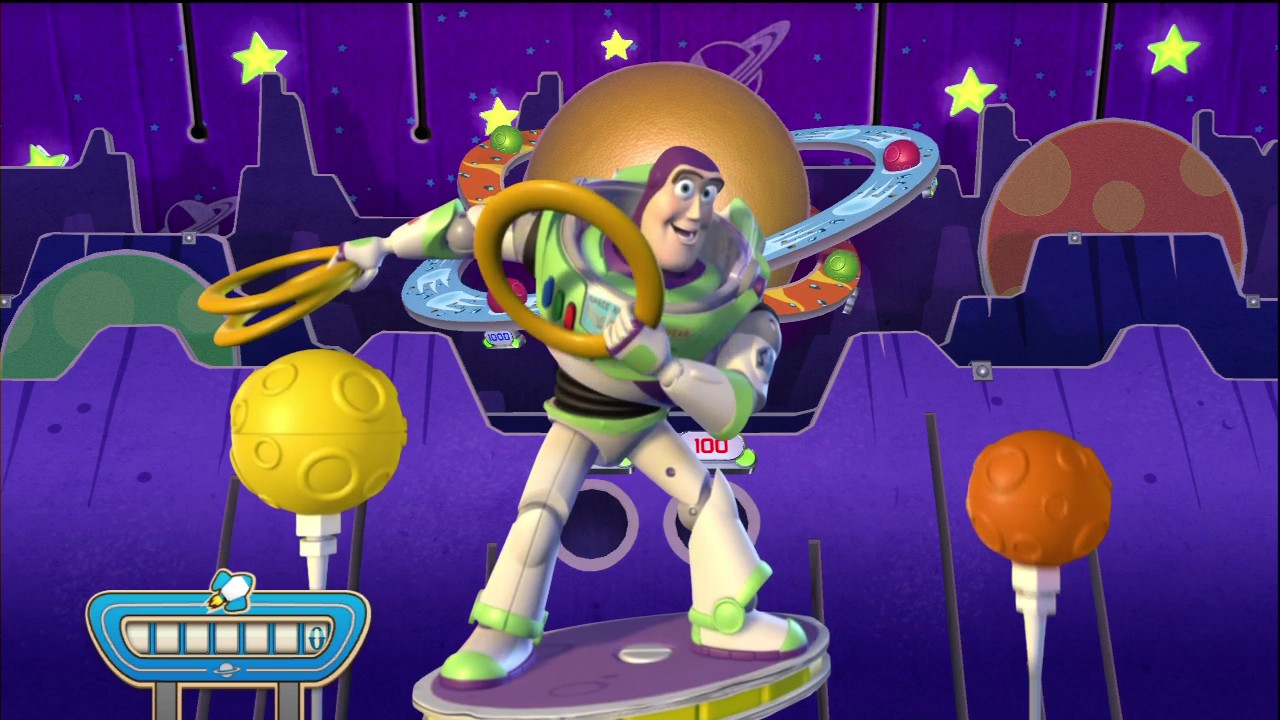 The toys are back out their box for another gaming outing with Toy Story Mania! This however is not a follow-up to the last release, and rather excellent action-platformer Toy Story 3: The Video Game. Toy Story Mania! is a whole other ball game, and has its roots firmly planted as another Kinect inspired party game.

The premise is simple; the toys as they do come to life to put on a show in their own puppet booth, and as the player you get to primarily mount the gunner seat and shoot down the objects on-screen for big points. While it’s clear Toy Story Mania! started life as a rather basic Kinect party game, for whatever reason (assuming broader appeal) the developers have chosen to include controller support as standard. 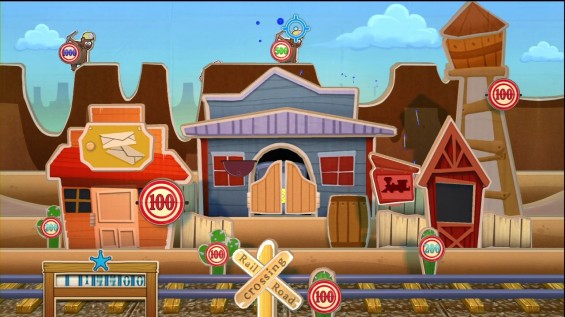 Adventure, Free Play and Party modes are what’s available and they each give you access to a total of five Toy Story character’s inspired booths – Wild West, Animals and Friends, Space Frontier, Army Men Challenge and Balloon Garden. Adventure mode might seem the obvious choice to jump into, pick a booth and play through the available mini-games, Free Play worked more to our liking though giving you some more freedom to jump right in and progressively unlocking the next mini-game for play. Party mode will just keep you going and going, with mini-game after mini-game getting launched.

Primarily the available mini-games will have you gunning and otherwise destroying moving targets on-screen; from plates, jeeps and planes to cardboard cut-out animals to mention just a few. There is an attempt to spice up the repetitive gameplay by mixing in some randomness – with the likes of some tennis and bowling for example which have a Toy Story twist to them to break up the all too familiar shooting-targets aspect that is the game’s core. 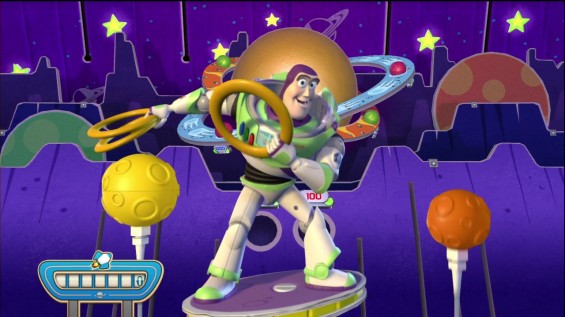 Each of the character’s booths contain eight mini-games to put your aiming skills – either by controller or Kinect – through their paces. If playing with the controller, aiming is done with the left analogue stick, manually shooting with the right trigger, and dodge distracting pies to the face with the right analogue stick – which replaces the full body leaning you would otherwise have to perform when playing with Kinect.

If using Kinect, simply standing up and raise both hands (steering wheel position) to mount that invisible machine gun, and if you’ve played many a Kinect carnival type game before, then you will feel right at home; simply aim by moving both hands to steer the on-screen reticle, and the game auto-fires for you blasting away your targets. In a blatant attempt to make this extremely easy and satisfying fray somewhat more challenging, pies will randomly get launched towards you from left, right, or up above, and you simply lean your body in the opposite direction to avoid the pie splatter. 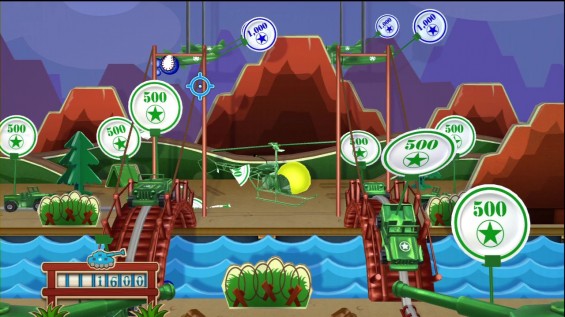 The booths and themes are inspired by their same Disneyland attraction counterparts for some added authenticity, and while simplistic in nature they do fit in perfectly well with the animated films that they are portraying. Toy Story’s characters often speak out throughout the mini-games to tell you how great you’re doing, and occasionally to give a tip to shoot certain targets for some hidden objectives.

Toy Story Mania! is by no means a lengthy game, though so few party game are, it’s rather simplistic, perhaps a little too much so, but nevertheless, it is fun, and younger family members should very much find it quite addicting. The more active Kinect aspect will likely appeal greater to children as well, but rest assured, Kinect is by no means required, and this game can easily be bested with your controller.

All modes of play support two players, either with two controllers or just two standing up in front of Kinect. Sadly, however, it’s not possible to do 2-players with one of each, you can not have one player with a controller, while the other stands up to make use of Kinect. This aspect would have likely appealed more to parents who don’t want to stand up and wave their arms in front of their television – rather leaving that to the kids.

There’s plenty of repetition to be found in Toy Story Mania!, though while there’s limited variety to the gameplay, there is greater variety in the characters and their booths which are put to better use. As a budget game, Toy Story Mania! is simplistic fun for 2-players to shoot down targets with, and younger gamers and fans of the films will very much have a blast in doing so.