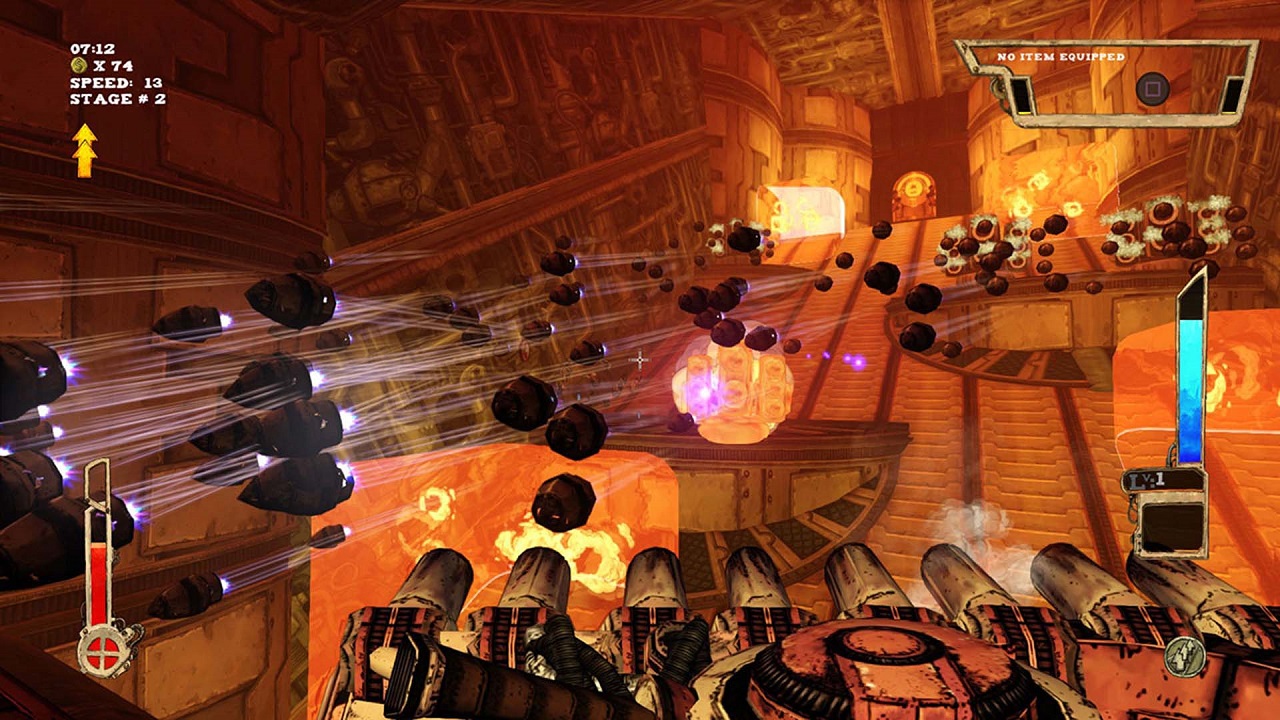 Grip Games releases Tower of Guns on consoles and PC providing a quick fix no nonsense shooting game that begs to be explored as players jump, power up and shoot. With a simplistic premise and an old school vibe is this worth checking out considering it’s free to download for PSN plus members at the time writing. Take a look at our Tower of Guns review for the full low-down.

Today we’re taking a look at Grip Games’ Tower of Guns which is available now on consoles and PC, although as of now the game is free via Playstation Plus which means it’s definitely worth the download either way. For everyone else the game packs a punch as players choose a weapon from a selection of first person shooter favourites and then jump into to the random generated levels. The idea is simple, run, shoot dodge and destroy whilst collecting loot dropped by the enemy. The loot drops power up the singular weapon you’re allowed to choose and the rest can spent on upgrades and topping up health as you progress. The weapon’s power diminishes every time you get hit so aside from tackling the enemies picking up items to boost up its power is paramount to success. There’s also a selection of perks players can choose at the start of the game which can make the game much easier depending on what is selected. The random element means that although you might be successful on one run, the next might be entirely different where death comes all too quickly. There’s also vast differences between the weapons, so careful selection is a must if one wants some variety or simply is looking to complete the game. It’s a highly basic idea that becomes more complicated with each passing stage where eventually you’re being shot at by all manner of turrets, flying craft and such like from every angle. Aside from simple dodging and multi jumping to evade, players also have to take note of the many hazards that litter the levels such as larva pits and numerous spiked edges. It’s very much an old school flavoured game that’s short and sharp and begs to be replayed over and over with its rogue-lite elements.

Thrown into the mix at the end of each level is a boss character who like the levels is random and requires shooting until it drops. There’s no real tactics involved here other than evasion of any minions and simply honing one’s sights whilst circle strafing until it’s game over.

Graphically, the game adopts a comic book style and is based around a series of interior locations both tight and expansive. There’s an element of platforming involved too and some classic ideas such as looking for secrets behind and under things. Sadly there’s little variation with the game’s overall looks which means you’ll soon tire of the same scenery. Performance wise the game becomes a little too big for its own boots (on Xbox One at least) where the the numbers of enemies and projectiles become too much to handle and the mostly solid 60 frames per second takes a serious nose dive into single figures. This isn’t good at all and does interrupt the gameplay quite considerably. Whether this extends to other platforms is unknown, but some tweaking of the levels is needed to make sure players don’t come face to face to what essentially can kill the game for some.

Audio is pretty much standard fare with some background music and typical sound effects making the most of things without being too dramatic. There is a basic story underlying the gameplay which can be ignored and is told via text messages by various characters.

In terms of length, the game can be completed quite quickly in under an hour, although the challenge is in unlocking all the weapons and upgrades which takes a lot longer. The ranked endless mode also has players names on it and means there’s enough to mess around with if you can hack the repeated gameplay pattern for a longer session.

Tower of Guns is a neat idea and one that for the most part works well enough despite some dreaded technical issues which could be a turn off for those who experience it. As a game to play in short bursts it’s mildly satisfying but ultimately lacks visual and gameplay variation for any lasting appeal. The low price might be enticing but before investing, be aware this is an arcade style basic shooter without any of the trimmings. Those after a bit more complexity should really look elsewhere although this is a fun game in bite-sized doses.