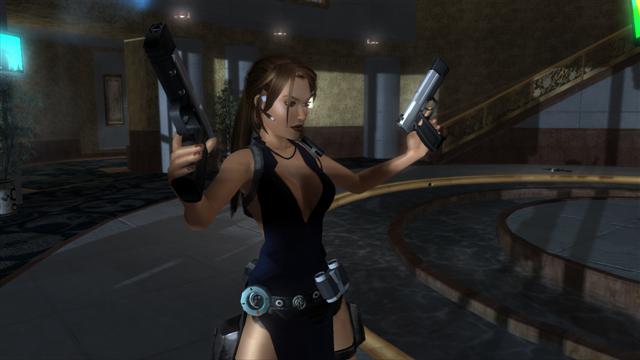 Well it’s been a while since Lara Croft; the enigmatic busty adventurer graced our consoles and even though many gamers felt her last outing was perhaps the worst in the series, her return for fans at least is a welcome one. Tomb Raider Legend on Xbox 360 brings the franchise into the next generation but does capture the feel of Tomb Raider 1 and 2 (the most highly regarded of the series) or does it get lost in the generation gap to become a mere shadow of its former self?

For the uninitiated, Tomb Raider games are essentially platform games minus the cute soundtrack and characters. Tomb Raider games play in third person so players can view Lara in action at all times including her rear when crawling and climbing. In fact you will be spending a lot of time looking at Lara’s rear and so better get used to it, although the true explorer should in fact pan the camera 360 degrees to get a better look at the surroundings.

Lara has a number of abilities and gadgets to help her explore lost tombs and hunt for ancient artefacts which is what she does best and in Legend it appears Lara is looking for closure on few personal issues from her past throughout the game. Her abilities include an awesome grip which enables her to cling on to ledges and shimmy across them. She can also leap gaps and launch herself higher to reach other ledges. Lara is also well suited to jumping bottomless chasms, swinging on ropes and poles like a true gymnast, or even sliding down zip lines with bare hands and running around in bare feet! She pretty much can traverse any obstacle the world throws at her. Legends spices things up a little whereby players can interact with these acrobatic moments such as climbing a pole and pressing the Y button will speed Lara up if timed correctly. Then there are things like unstable ledges and poles which if Lara takes too long might prove costly to her well being as they crumble or fall away leaving her grasping at air and falling to a lonely grave.

Lara also has a magnetic grappling hook which throughout her adventure proves vital to her success. With the hook she can pull distant objects towards her and use it to become her own portable swinging rope as it is able to attach it self to certain objects giving her the option to swing until her heart is content. Lara also has some nifty binoculars which give her an analysis of items of interest in any particular area in view and with her colleagues in contact via an earpiece means that she is never too far away from helpful advice to any problems she encounters.

Lara is also a dab hand at armed combat and whilst stealth isn’t featured in Legends she is able to dish out suitable punishment to attacking wild animals and gun toting bad guys. Lara never leaves home without her twin pistols which she can lock on to targets, jump around the room and shoot at the same time with relative ease. If she’s lucky she might also find weapons dropped by the bad guys which can then be used against them. During my play I found a Shotgun, Sub machine gun, assault rifle and grenades which were all useful throughout.

The core game play has pretty much remained unchanged from previous Tomb Raider titles and although the inclusion of some motorcycle sections and interactive cut scenes add some variety to the basic navigating of areas, fans of earlier games will have a sense of familiarity and feel right at home here. The levels and puzzles are well designed and require some taxing lateral thinking to pass; although I do feel that some of the puzzle and in fact the general navigating areas felt toned down compared to some head crunching moments of the original game. I got the feeling at times that I wasn’t really exploring much as the route always seemed very obvious as if some invisible friend was constantly guiding me in the right direction as opposed to leaving me high and dry for several hours trying to work something out!

Well from the game’s opening everything in the cut scenes (using the game engine) looks impressive and sharp and when faced with the opening level when you take control of Lara for the first time, looks impressive indeed as it provides an excellent sense of scale with plenty of greenery and water effects. Lara herself looks very rounded and most definitely her best looking model to date especially as you get to see her in a number costumes that featured throughout the series, yes that includes the classic sweaty olive green vest! When looking close up at the textures on her skin especially during the cut scenes are quite detailed and she generally animates extremely fluidly making for a realistic behaving character (within the game world that is). There are some neat looking (albeit low resolution) real time shadows used which become more noticeable when Lara uses her flashlight and provides some dancing shadows across surfaces. There are also a number of advanced physics on offer whereby certain objects can be moved or interacted with such as boxes being used as cover can be destroyed. This is nothing new in games but it’s a welcome inclusion all the same. On a negative note I did notice some moments where there was clipping (the character model merging with static objects) and the occasional dip in frame rate from time to time but nothing to really hamper the playing experience. I also had a glimpse of the Xbox version of the game which although is exactly the same as far as I could tell, pales in comparison as the high resolution textures used in the Xbox 360 version are clearly superior in every way.

The grunting groaning Lara is back in full force and this time she is accompanied by a varied soundtrack that is grandeur at times and more subtle at others. The music has been recorded to a high standard and provides a captivating aural experience when it kicks in during key moments in the game. The voice acting for Lara is distinctly British and her character comes across hard but fair which the actress does a good job of conveying throughout. The other voices are a little cliché but help provide some character to cast of male helpers that Lara has at her disposal. Other ambient sound effects are featured and again help create the much needed ambience you would expect from the locations that Lara visits.

Well this is a tricky one because on one hand the game isn’t the longest by any stretch of the imagination but on the other hand the game does force for multiple plays of levels especially if you intend on unlocking all of the game secrets such as new costumes, biographies and the weapon upgrades to name but a few. I figure most gamers will not find all of the hidden reward items in the game on their first play through and most likely will resort to replaying single levels which the game allows you to do once levels have been beaten already. Players can also choose between three levels of difficulty although this only changes the difficulty of enemies as opposed to puzzle solving. So, you’ve beaten the game once (which should take no longer than a weekend) what now? Well Lara is able to explore her mansion looking for more reward items and then I guess players are left to explore every inch of each level to find any rewards that were missed which could take some time. The only other replay-ability comes from a time trail mode which is basically rushing through the levels to a strict time limit and really is reserved for those who know the 7 levels like the back of their hand!

Tomb Raider Legend is a welcome return for Lara as it captures the feel of previous games without adding too many new tricks to lose its flavour. I still feel that although enjoyable, the puzzles weren’t as fiendish as previous games and offered only a mild mental challenge. I also felt that the linearity of the levels lost some of the exploration elements found in previous titles especially as not once did I lose my bearings. In this respect I feel Tomb Raider Legend will have a wider appeal as more gamers will be able to take control of Lara minus any headaches caused from over bearing mind games or navigation issues. I guess this is a good thing although I am a little disappointed with the game length as I felt Legend didn’t have that epic feel found in Tomb Raider 1 and 2. Judging Legend on its own merits and you are left with a solid third person action/platform game featuring a charismatic yet sassy leading lady and pure entertainment as soon as you begin to play. I think Tomb Raider Legend is a must buy for fans of the series and perhaps a rental for anyone else. The overall length of the game kills it for me and although enjoyable from start to finish is over far too soon to have any sort of lasting impact. To conclude, as an old man once said, prettier graphics do not necessarily make a better game and in this case holds true, although I cannot stress enough that what you do get here is ultimately fun all the way through which is what counts.