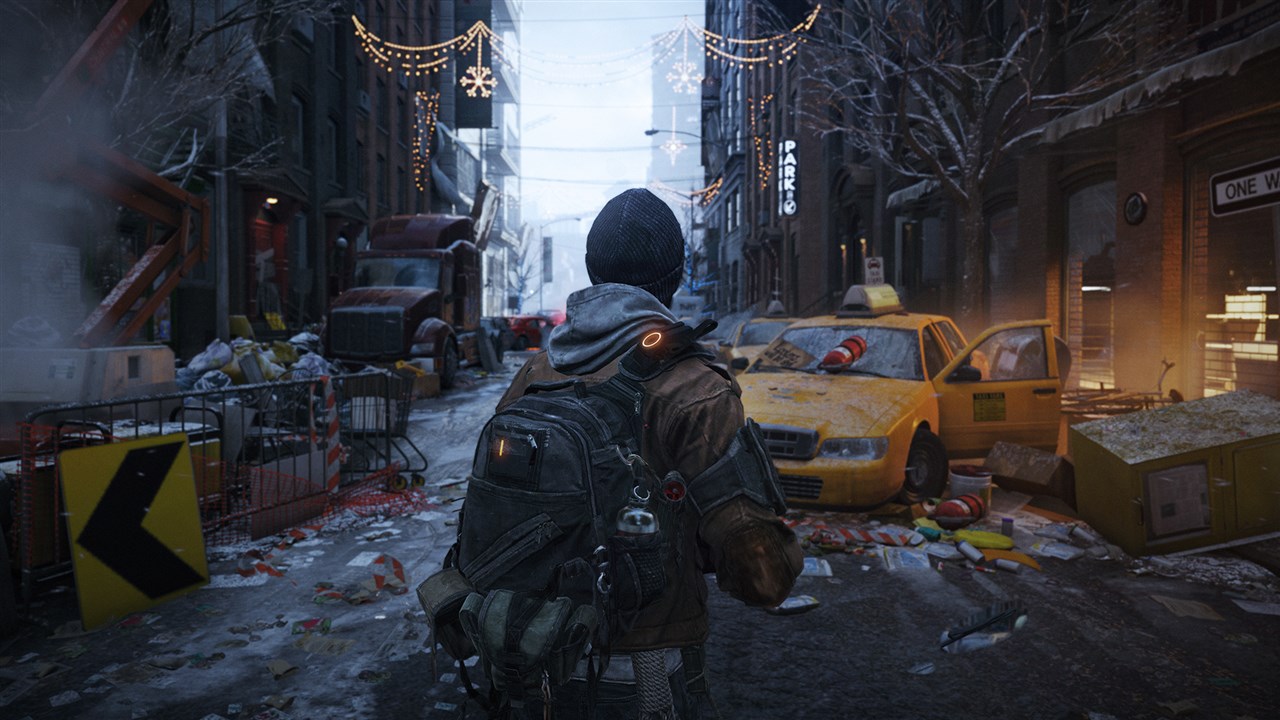 Ubisoft released its ambitious Third person open world action shooter role playing game The Division a few weeks ago and after a couple of Beta tests which involved the community it gave a taste of what to expect. Now the final product is in the hands of gamers and after many hours of playing, reaching the level cap and spending some time in the post story complete content it’s clear there’s an interesting game here for solo gamers and those who like to co-op or play versus.

The story has been well documented with its smallpox virus strain hitting New York and the aftermath of mass infection being the told in a typical Clancy doom and gloom style. It has to be said, due to the open nature of the gameplay and the fact there’s quite a disconnect between the narrative and what the player gets up to it’s quite hard to digest even if the evidence lies before you during every moment you’re playing. You can’t physically escape from the constant reminder that New York is not as it should be and there’s a massive problem being dealt with. You see the smashed up cars, the roaming civilians fighting each other, foraging for resources or even dying in front of you. It cleverly tells its story through visual cues that don’t need characterization or cutscenes – although there’s quite a few of those for the main missions and rewards for completing them. Every element paints a dark and foreboding backdrop for your Division agent to roam about for the supposed greater good, so even if you’re not gelling with the finer details of the story you can still bask in the destructive world that’s been created here. That’s a pretty neat approach allowing players of varying interest levels to get back what they put into the game. If you’re simply here for the shooter ride then that’s fine, you can run about shooting up the various gangs of New York that have survived and taken up residence in the many zoned areas or you can delve a little deeper and uncover more of the sinister plot through your own investigative means. The game rarely holds your hand or direction outside of the main story missions and allows you to dictate your own pace – although that said, completing the main story missions is key to upgrading skills via the base of operations.

Looking at the shooting action and there’s the typical assortment of weapons to choose from or acquire in the field. The game at its heart is a cover shooter against AI that does the same. You’ll come up against easy foes to begin with making for an easy game to get into, but once you’ve invested the hours you’ll find moving about the tougher areas of New York becomes more of a challenge. The shooter mechanics and AI work well together as you come up against an assortment of human only foes. Some will dig in, buff their group, others will grenade spam or rush you which keeps you on your toes. The game’s cover system can be a little fiddly in the heat of battle some times but mostly it works due to the masses of objects which can be mantled or used as cover. There’s some neat verticality too which can give a slight tactical edge over your attackers.

The game’s combat is engaging and really only comes to its own when the threat level is heightened – before then it can feel like going through the motions after so many hours playing. Sadly you won’t really see that if playing by the pace the game sets you. There is choice to up the difficulty of the main missions but the balancing here isn’t always as finely tuned as you would expect. The end game really is where it’s at post level 30 when you can really engage it dramatic battles against AI in the normal sections of New York or the more menacing Dark Zone which houses potential rogue human agents to be mindful of as well as suped up AI.

New York houses an assortment of side objectives and opportunities which allow players the chance to pick and choose their fights. The map is quite expansive and the extra missions fall into one of several repeated categories such as protecting supplies, rescuing hostages and clearing out gangs from strongholds to name but a few. The approach follows the Ubisoft tried and trusted formula we’ve seen in game’s like Assassin’s Creed and Far Cry but is less formulaic and offers a more natural flowing experience as multiple objectives can be accessed on the fly and you can simply disengage should you see something else or feel like you’ve bitten off more than you can chew.

In terms of visuals, the PC version looks fantastic and will push even the most top end of hardware when running the game beyond the default Ultra setting. With a GTX 980 Ti you’ll comfortably get a steady 60 frames per second at 1080p although on occasion this can dip during the more demanding scenes where there’s smoke and lots of other effects raging. Running the game in 1440p also fares well but the performance drops depending on the area you’re in. 4K is simply beautiful but you’re likely to maintain 30 frames per second on a single high end GPU for the most part which is acceptable and well playable.

New York is simply filled with details and feels suitably deserted but not to the extent of being a barren post apocalyptic wasteland. Sure, there are moments where it’s just your agent running for long periods of time (there is a fast travel option for the impatient) but this adds to the sense of scale on offer and highlights the extreme attention to detail that surrounds you. There’s also an abundance of familiar landmarks to marvel at , a disused underground/metro system and the chance to head upwards – although not to the highest skyscrapers for those important views unfortunately. New York just feels vibrant and decrepit at the same time and is an excellent playground regardless of platform being used.

Audio is quality as well and although there’s an assortment of characters you’ll hear over the radio there’s enough chatter to keep you well informed even if there’s a distinct lack of real likeable characters. It’s a grim Clancy styled world here where there’s no pleasantries, no love interest and a job to be done. You can view this as giving the game a lack of personality but cleverly the environment of the disrupted city provides all the stories you need especially with the mostly optional “Echoes” which play out scenes from the past.

For the longer term, The Division’s open world offers lots of incentive to continue playing although the core experience does rely heavily on the cover shooting action. There are collectibles aplenty to salvage and things like daily missions to delve into but beyond this the solo player is tasked with finding, or grinding for loot. It’s the same hook you’ll find in any MMO style game and means if it sinks its claws in, you’ll ignore any repetition for the sake of the ultimate prize. This approach isn’t for everyone but there’s enough customization options to keep it interesting where you’re not only just looking for the next most powerful weapon but other mods, armour pieces and clothing too. Players can also team up via matchmaking or with friends at any time to tackle the main missions or wander around the city. The game offers an intuitive system which can be dipped in and out of at leisure.

As mentioned, there’s also the Dark Zone which is player versus player or co-op based outside of the main area of the city. After a recent update the zone has undergone some major changes where it’s the place to find the best loot but also can mean coming up against groups of rogue agents who prey on lone players. It’s quite easy to play and not encounter any rogue element, but the threat is there all the same making for a tense and thrilling post game area to dip in and out of. The only negative here is a lack of variety as it revolves around killing re spawning AI without much structure.

Ubisoft’s The Division offers a simple game at heart that’s presented with a grand scale and neat post apocalyptic style direction. Whilst the core cover shooting mechanics are well met and there’s a massive variety of gear to equip, after hours of play the experience can get a little repetitive. However, this is the nature of the beast and for some gamers the lure of levelling up or acquiring new loot is all that’s needed. In this regard the game succeeds in offering a compelling playground of riches to be pillaged and explored.

For solo players, The Division offers a welcoming game to sink some time into and enough content to last days and weeks depending on your daily hours invested. The game does feel more engaging with like-minded players in co-op but isn’t a prerequisite for overall enjoyment. This is a well made game that’s fun to play and enticing enough to keep you coming back for more if you’re a fan of loot and shooting up human foes. It’s a game that gets better the more your put into it although does allow those with less interest in story to snag some rewards.