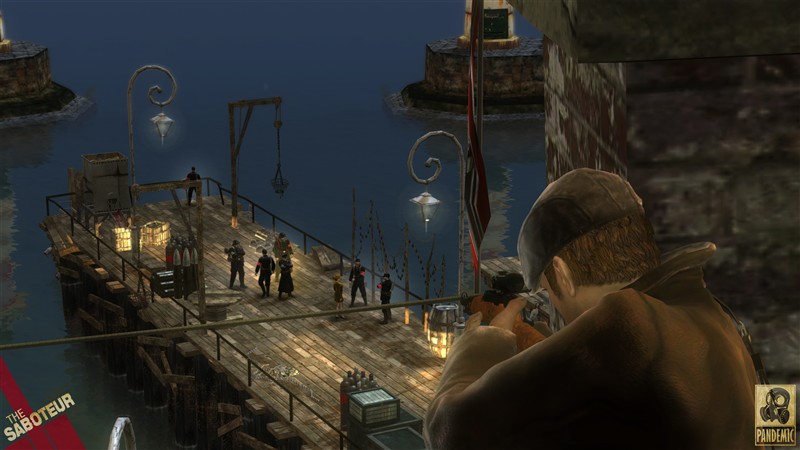 We’ve had a number of open world games this year, and we’ve also had a number of World War II inspired offerings as well, but not one that combines the two. Perhaps developer Pandemic seized the opportunity to cater to fans of both and offer them an all encompassing WWII open world game but instead of visiting well trodden paths, played it cool and offered something entirely different to what’s expected. Cue The Saboteur, a game set in Paris during WWII and featuring an Irish leading character called Sean – an unusual combination if there ever was one but still it makes a change from storming beaches and spending all our moments in Normandy. With stealth and action elements on offer, is The Saboteur worth checking out or does the game lack the charisma and charms of its peers?

Playing as the unwitting hero Sean marks a distinct departure from the usual fighter we’ve come to expect, and being daring, the scenario is perhaps more akin to the not so favourable Turning Point Fall of Liberty. Sean is a race driver, a bit of a jack the lad, but when his racing career is hijacked by a German officer who cheats his way to victory, Sean and his loyal friend seek revenge. The game’s opening is set prior to the German invasion and introduces the player to the various sneaking and combat moves available. Yes, race drivers are well versed in breaking necks and using firearms, but less said about that the better. At the end of the day, Sean needs an excuse to head off into Paris and start exacting his own form of justice on the German regime that has taken over.

Once the game begins proper, you’ll be presented with a large open area of Paris and its surrounding countryside, some artistic liberties have been taken, but you get the gist of what’s been attempted. Paris itself is a veritable playground of sorts where Sean can climb atop buildings, drive around the populated streets in various vehicles and run around effortlessly bumping into the locals and the odd German officer. You’ll meet various resistance fighters along the way who summon you to do their bidding, for the greater good of course, which means liberating the city from the German clutches. To do this you undertake various missions which as the name implies offers plenty of moments to sabotage the German plans, whether that be blowing up key targets to assassinating German officers. There’s a wide range of missions on offer and you’ll meet several handlers along the way all keen on using Sean and his race driver like abilities (ahem).

Aside from hanging out in bases, equipping weapons and undertaking missions for the leading characters, you’re able to free roam a the city and enter the freeplay missions to gain money which in turn is used to buy skills and tools of the trade. These are ongoing and can be completed at leisure during or outside of any other missions. Paris is littered with the tools of the German regime whether that be sniper nests, fuel dumps, propaganda speakers etc. With Sean’s trusty dynamite he’s able to plant explosives and then hot foot it away. The freeplay elements are plentiful and if you buy the maps from your arms dealer which highlights them all, you’ll find that there’s plenty to keep you occupied. The beauty of the freeplay is the fact that you can practice your stealth and subterfuge techniques and if the crap hits the fan, carry on all gung-ho, although even on default difficulty it’s sometimes hard to escape stealthily as Germans appear on every street corner as you run away.

The stealth mechanics are good but not brilliant, and on occasion cracks begin to appear. You’re notified if you’re being watched by the Germans, and how interested they are in you, so if you start drawing attention to yourself like climbing buildings or drawing a weapon in public things are going to heat up. There’s some clever use of subterfuge which can help when infiltrating the German strongholds, but overall the stealth seems to be broken. There will be times when the Germans can spot you through solid objects which gets annoying and at times the game seems a little too unforgiving with eyes seemingly everywhere – where to a degree some of the fun is taken out of the game. For those players with more patience than most will find the stealth a little more appealing.

When your stealth antics go tits up you can then rely on your wit and charm with the game’s action elements, this means grabbing a shotgun or SMG and laying the smackdown on your pursuers – who keep on coming and coming until you vacate the ‘suspicion zone’. The gun play is good, but like the stealth not particularly great. The aiming seems a little sluggish and at times you’ll wonder why your sniper shot hasn’t killed and instead left you open for a battering. If you’re in need of a fast escape (which is often) then the climbing mechanic might frustrate, because for some reason the action of climbing seems painfully slow, especially when under fire and when you’ve got to constantly press the A button to grab ledges. It’s not as fluid as it could be and when compared to something like Assassin’s Creed, feels backward.

The graphics are a mixed bag, because on one hand you have a very stylised view of areas fully occupied by Germans. These are marked in black and white with a splattering of colour (namely red) to showcase the threat and of course the red stuff when it spills. The game looks different to most games with this hue and has a certain charm, yet once the colour is restored, (when an area is free of the German regime) the game takes on a more traditional look and isn’t as good looking at all. In colour, the game has an almost watercolour painting look, and when viewing distant objects the lack of detail shows even more. It’s an interesting take on the open world game, but for graphics junkies, you might feel a little underwhelmed despite some neat lighting and fog/weather effects. The character models are decent enough although you will be seeing lots of clones, perhaps more than is necessary which somewhat takes you out of the game.

There are other issues which plague the game aside from the changeable aesthetics, these are mainly with the partner AI which seem to be programmed poorly. Appart from being mission critical, the AI has a habit of getting stuck on the scenery thus foiling any plans you have for a quick escape. On some occasions you might have to break cover to go back and rescue them simply because a curb or crate is too dangerous an inanimate object for them to overcome. It’s silly and showcases sloppy programming, but luckily there’s more to the game than caring for AI partners.

The music on offer is from the 40s and is only really apparent when driving a vehicle. There are some fitting tunes on offer which help raise the mood, sadly you’ll be greeted by ambient sounds more than anything whilst on foot. The only other occasion you’ll hear an orchestral score intervene is when you’ve been discovered or evading the patrols looking for you.

Sean is acted in the most typical of fashions and his Irish charms are likeable albeit a little predictable. The rest of the cast fulfil non memorable stereotypical roles that are not too far removed from the sitcom ‘Allo Allo’. The ambience of the city is welcome, yet feels somewhat desolate at times.

Saboteur offers plenty of hours worth of entertainment if you’re set on completing all freeplay objectives; in fact there are so many you might get a little tired. However, as a game to dip in and out of once the more interesting main story is beaten, you’ll find much to be gained from sneaking around the Germans. The main problem with the game is the lack of diversity, sure you’ll assassinate, drive, snipe and blow shit up, but aside from this there’s little else to do. With no multiplayer or co-op makes the single player a little underwhelming especially after you’ve blown to smithereens your one hundredth target.

Pandemic have done a good job bringing the streets of Paris to life and offering yet another game set during WWII. The game isn’t a straight up shooter, which is a good thing, and if you’ve got the patience to test the stealth mechanics properly, you’ll find some rewarding moments. However, with such a large open world to traverse you’ll at times be a little miffed at the excessive driving from point A to B during missions and the general lack of diversity within such a large game world. The niggly bugs aren’t game breaking, but might test your patience more than you’d like and with so many open world games on Xbox 360 which offer better experiences all round, The Saboteur can only be recommended if you’re a fan of the genre and have exhausted all other avenues or the appeal of a film noir looking Paris tickles your fancy.