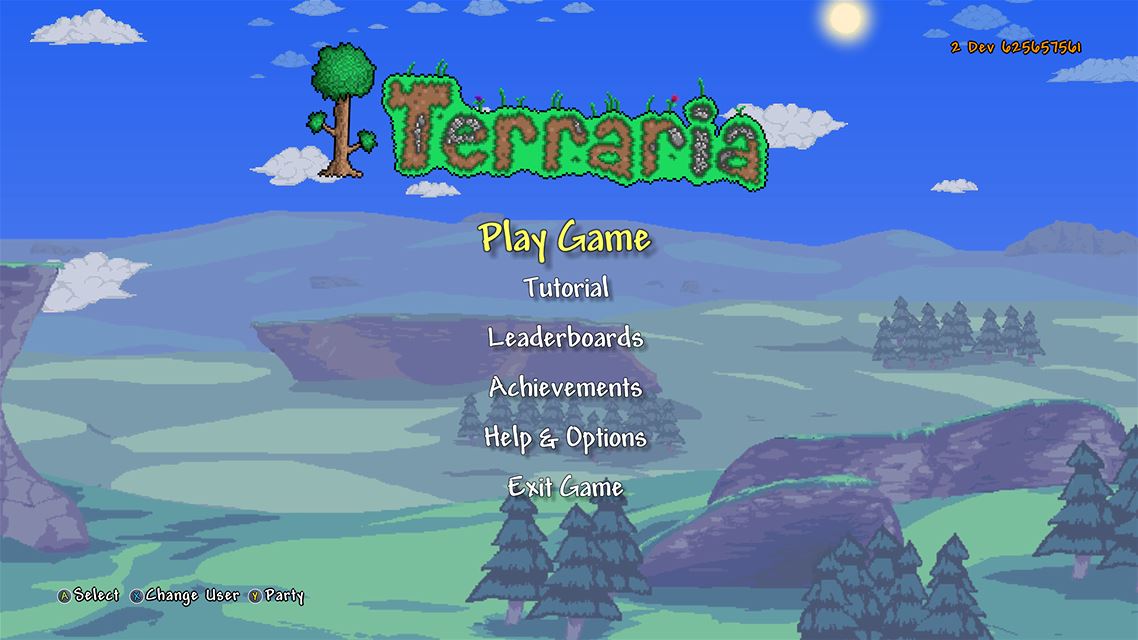 505 Games and Engine Software released their award winning open world survival game Terraria on Xbox One and PS4 making the game available on most systems having enjoyed launches on PC and mobile devices. Now the game comes to the bigger screen, how well does it stack up. Take a look at our Terraria Xbox One/PS4 review for the full picture.

Today we’re taking a look at 505 Games and Engine Software’s Terraria which for the first time releases on Xbox One and PS4 to join the ranks of the PC, last gen and mobile releases. The premise is simple, choose a male or female avatar and then jump into either a large, medium or small randomly generated world and get exploring. The opening moments of the game can be quite slow and quickly, minutes turn into hours as you work out what to do. There’s a handy tutorial available this time which provides a basic overview, but it’s when the game starts proper players are thrust into the relative unknown. What’s the objective at the start? Explore as an underpowered character, dig for valuable resources or build a base of operations from which to spread out. There’s plenty of choices on offer here, but as with many survival games, come night fall and the pressure is on as tougher enemies appear. The combat is a mixed bag and relies on an auto lock function, although this can be toggled for manual aiming if desired. Enemies mob the player and with limited resources at the game’s start is quite difficult when presented with ground zombies and jungle bats coming from all directions.

After some time and once players are fully versed in what they can and can’t do – most likely after several deaths – the real adventure begins. There’s lots of items to craft which are tied to collecting various bits and pieces whilst out in the wild. As players move deeper into the massive side scrolling world, new discoveries progress the player. There are weapons to forge, armour upgrades and all sorts to be discovered – but as mentioned these things take considerable time.

The Xbox One and PS4 versions support all of the latest content for the game, which includes more items, a new boss character, 4 player split screen, pets and enemies although for some of the more intricate content, players would do well to consult one of the many online guides for assistance. It’s a big a game that is mostly different for each player in terms of layout, so despite sharing the same overall goals can be tackled in a number of ways.

Moving away from the looks, the game’s audio is of note and provides some pleasant melodies fitting of the sprite graphics in a cute 8-bit way. Sound effects are pretty limited though and if you’re expecting speech, then forget it as this is as throwback as they come, but all the more charming for it.

As mentioned, Terraria commands a bit of commitment from the player where progression isn’t something that happens very quickly. Whilst the processes for crafting, mining and gathering is simple, the time it takes doesn’t cater to instant gratification, and even after several hours play there’s still an untold amount of things to aim for. There’s also some difficulty settings for those with a death-wish including a game over if killed option which offers the ultimate survival mode. Luckily, players can use multiple save slots to experiment with and even use new world to gather needed resources as items in possession are tied to the character not the world. Sadly, there’s no importing of saves from the Xbox 360 version which means if you’ve already sunk millions of hours, then all progress is lost.

Sadly, the game’s online component is determined by suitable players to join and although there’s an option to leave the single player game open for friend invites or anyone, there’s simply not enough players to make this a worthwhile choice – on Xbox One at least. The Xbox One community for example is non existent and so if this aspect appeals then making sure friends buy the game as well is a must. The PS4 version enjoys cross platform play with the PS3 and Vita making it a more viable purchase in this regard.

Terraria is a cute game that’s full of wonder and exploration which despite its retro looks, offers some time-eating compelling gameplay for those who understand the game’s premise. With tons of extra content over the original release and improved HD graphics, this is a worthwhile package for newcomers. Whilst the gameplay elements are somewhat simplified, there’s a certain charm the presentation exudes which makes it worth playing if you’re a fan of the survival/crafting genre. The lack of community is shame, but given the game’s age and release on multiple platforms already it’s perhaps understandable. Terraria is available for around £13 and depending on whether you get hooked or not, there’s certainly an ample amount of value for money on offer.