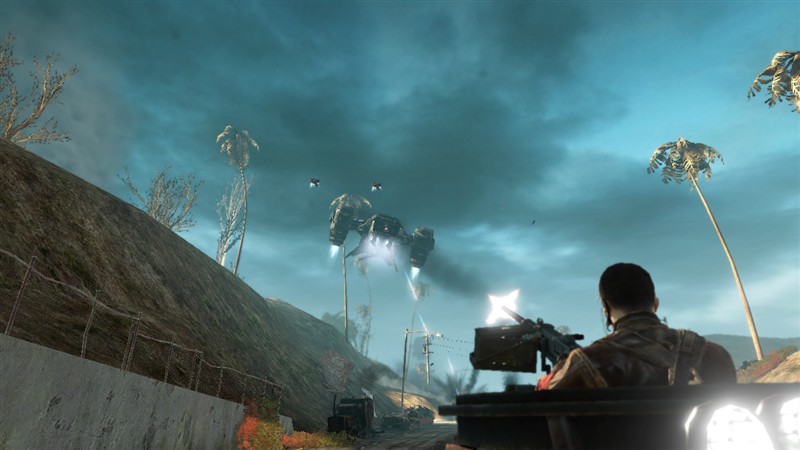 Swedish developer GRIN have been a busy outlet of late, what with Wanted, Bionic Commando and now Terminator Salvation video games under their belts. This latest movie tie-in game which is based on the tales of John Connor who has grown from the whiny smart arsed brat in the Terminator 2 movie into a military superhero. The game showcases events prior to the just released movie where John shows off his leadership skills in a mission to rescue trapped resistance fighters who are deep within the grasps of the mechanical Skynet forces. It’s a perfect excuse to grab some weapons and hand one to the Skynet forces which inhabit the now destroyed Los Angeles.

Terminator Salvation is a third person action game where you assume the role of John who battles alongside various resistance fighters. You’ll be fighting the Skynet forces in run down locations across the city and generally kicking robotic butt across 9 levels. The game offers a simplistic and easy to use cover mechanic where you’re able to move around cover by holding a direction and pressing a button. Sadly, not all cover can be used and if there’s no on-screen prompt, then you’re going to be out of luck. This can get a little tiresome at times, but is something that you’ll have to work around. The game throws you into various encounters where the gameplay onus is on flanking the enemy by moving into position using said cover system. Your AI controlled resistance fighters do a decent job of being distractions whilst you are charged with moving into position so you can machine gun, shotgun, RPG or grenade your opponents into oblivion. It’s a pretty basic system which seems to highlight a distinct lack of diversity.

The main issue here is that there are very few enemy types, (about 5) and being made out of metal, most are pretty tough to take down. Your most frequent opponents all seem to require hitting in specific zones (or using a particular weapon) to take down quickly, and thus draws out encounters into stand-offs rather than free flowing skirmishes. You’ll find the aforementioned weapons lying around from fallen resistance fighters and will never have a short supply of tools to keep you and your team alive.

On occasion you’ll be greeted with an on-rails section which has you riding shotgun and shooting up various opponents as you try to survive or protect other units in your group. It breaks up the on foot action and can be frustrating at times especially on the game’s not so tough Hard difficulty. The game in general is pretty run of the mill stuff with nothing noteworthy or worth mentioning as a stand out feature, so if you’ve played a shooter before, you’ll have little trouble getting to grips with the game.

The biggest problem with the game is not its execution, but the lack of any inspiring moments. What is on offer are predictible scenes which are drenched in formulaic gameplay. You’ll no doubt initially enjoy what’s on offer, but linear environments, and a sheer lack of engagement when fighting the few enemies will possibly leave you unfulfilled.

Functional is probably the best word to describe the game’s graphics, as these are no where near as polished for an Xbox 360 game in 2009. The character models are dicey, the environments are dull, lifeless, repetitive and simply lacking in any sort of visual quality to draw you in. There are no visual glitches per-se other than some weird happenings like dying as you cross a checkpoint and still being able to progress when you should have restarted. There’s just an overall sheen of lazy applied to the entire game’s presentation which is a shame as so much more could have been done here to make things more memorable and appealing.

The audio is slightly better because you’ll be treated to the familiar score from the movies, that includes the dark tones when terminators are inbound on your position. There’s a general lack of variety though which makes the audio, like everything else in the game, non-inspiring. The voice acting is of a reasonable standard, but don’t expect the plot to be anything but a simplistic affair, with equally simplistic lines of dialogue throughout.

This is probably the worst aspect of the game, because as a story based only experience, there’s little incentive to play the game once already beaten – although a co-op option exists if you and friend want to tackle the game together. The game can be finished in around 3-6 hours depending on your skill and with some of the most lazy achievements in a game to date, you’ll find the game ending just as you’re getting warmed up. Even the game’s hard setting is incredibly easy for any accomplished gamers and really highlights the fact that as a movie tie-in game, GRIN have totally catered towards any ill-informed fans of the movie and no-one else.

Terminator Salvation copies tried and trusted formulas that work in other games, and regurgitates the ideas into something so basic and uneventful that the homage paid to the games it copies is totally lost. For gamers who are after a simplistic action game based on a popular franchise then there’s something here that may peak your interest. However, the reality is that after a short while of playing you might feel somewhat disappointed with what’s on offer. The game follows the unwritten rule that movie tie in games are lacking and under par, and it’s obvious that GRIN are merely purveyors of a cash cow product. If you’re a fan of the movies or have been given a newly found interest in all things Terminator, then by all means rent the game, but as a full priced title with so little on offer it’s virtually impossible to recommend a purchase.