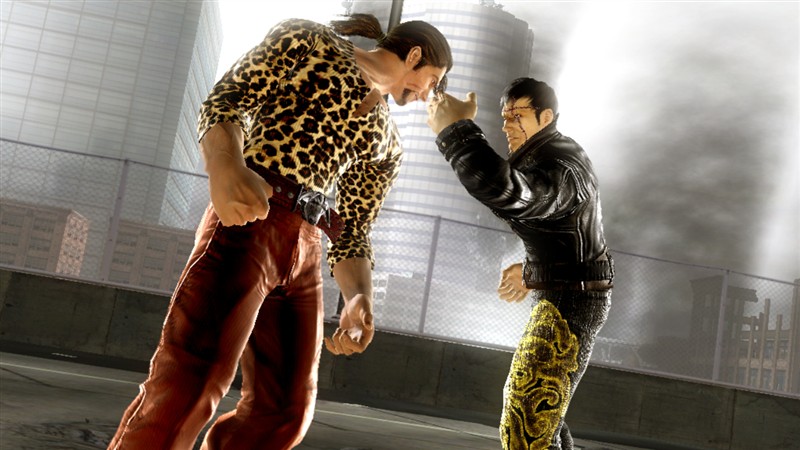 The Tekken series has been around for a long time now and has seen 5 previous games over the years starting out in the arcades and making its way to the Playstation. The roster of characters has grown considerably with each iteration and the game continues to add more meat to the package with each version. With the arrival of Tekken 6, it’s been interesting to contemplate what Namco could do to make the game even more robust and filled with the features fighting aficionados come to expect from a fighting game. With so many key titles under their belts alongside the sister series that is Soul Calibur, can Tekken 6 cement itself with those iron fists as the king of fighters for this generation or are old familiar habits hard to shrug off as the game tries to reinvent itself with new features?

Tekken 6 presents the glorious high quality intro that you come to expect from the series, an introduction to the players outside of the combat. The series does have some sort of story, but to be honest isn’t really an integral part of enjoying what’s on offer. The crux of the matter is getting into the arenas and kicking your opponent into touch whilst grinning menacingly like a Cheshire Cat. There are modes galore on offer to test your mettle and these range from a straight conversion of the Arcade game which boasts over 40 characters and enough sweat and tears to keep you well occupied (especially once you reach the last oversized boss). Then there are the extras that are unique to the console version; including Survival mode, Team Battle, Versus, Ghost Battle, Time Attack and Practice. These are nothing new and standard fare for Tekken games, but the addition of the all new Scenario Mode which although similar to the old Tekken Force mode, offers a little more depth to the game and it’s characters.

The fighting remains pretty much unchanged from previous games, or at least from Tekken 5, although purists will notice some changed moves from well loved and practised characters. The combat itself relies heavily on blocking, counter attacking and juggling opponents up in the air to get the most hits in. It’s never nice to be on the receiving end of these especially when you’ve got walls which cause damage and ground attacks that are effective when you’re down but not out. The onus on combat is to not get caught out by these, to learn when to block high or low and to read your opponent, look for an opening and unleash your own flurry of attacks. It’s a game of will, cat and mouse, patience but one where with simple moves you can still win, and with more complex manoeuvres really outsmart your adversaries by mixing up your play style so you’re not too predictable.

The game is very easy to get into, but a lot tougher to master, and as with all fighting games it’s worth spending the time studying the attacks of your opponents to give you the edge required to win. The AI especially will often repeat the same set of moves over and over, yet human opponents are going to mix it up quite a bit to keep you guessing. The inclusion of the Team Battle, Survival etc. are all welcome distractions from the main arcade game but come more to life if there’s another human to play with.

Tekken 6 expands on the Tekken Force mode as seen in Tekken 4 and this time makes a fully fledged storyline for each character, starting out with new blood Alisa and Lars. What’s unique about this mode is not only the action slant it adopts but the arena where you’re able to fight a few quick battles versus the AI to unlock the CGI endings for each character (usually reserved for the Arcade mode).The scenario mode attempts to piece things together and actually offers a different dialogue path if you choose different main characters. Here it’s you and an AI partner teaming up to take on all sorts of goons and other characters from the main game. You’ve got free movement and the move sets from the main game although movement is limited when you lock into a fight. The levels are varied but you simply go from A to B in the most linear of ways. During fights you can break open chests to get power-ups, a melee weapon and some guns as well as items that replenish health. However the real enjoyment comes from picking up money to buy those all important unique items of clothing for your characters. There are hundreds of items to choose from and looking at the prices are pretty expensive with some costing millions. You’ll get credits for most fights across most modes, but it’s the scenario mode that offers the most reward and adds some credence to the actual clothing items. In scenario mode each item is graded and can offer unique abilities to the wearer which makes things lot easier. It’s also fun upgrading the characters with new threads as you ditch old clothes for new more beneficial garments. The only complaint levelled at this mode is the lack of custom character slots (up to 3 per character) and the lack of choice for AI partner. For the multiplayer side of things a lack of two player gaming is missed, although this might be patched in at some point.

Tekken 6 looks pretty decent but there are times where the lighting looks a little off and detail lacking. It’s not the best looking fighter around, but conveys the wild and wacky characters well enough, especially in terms of animations when fighting. Sometimes you have to look a little closer to notice the improvements to the character models rather than being immediately bowled over by them. The design is of a very high standard, but there just seems to be a lack of polish in some instances, like texture detail on certain surfaces.

Aside from minor graphical gripes and perhaps an expectation for something more, the game does run very smoothly and offers fast paced gaming. The scenario mode takes a dip in quality, but offers more action as compensation. As for the main stages there are some varied locales but one of the highlights has to be the ‘Hidden Retreat’ which is full of sheep, yes sheep! and the ‘Temple Grounds’ which boasts some highly impressive lighting where dusk turns to night as you fight.

There’s the usual mix of Japanese and English voices on offer and to be honest the voice acting isn’t engaging or brilliant, but does the job of adding some life to the characters. The music is decent enough but has its fair share of screaming guitars and pounding drums amongst more light hearted tunes. The fighting sound effects are standard fare and not much different from previous games.

Fighting games are in a world of their own when it comes to longevity. It’s easy to dismiss these games as short as you choose each character and breeze through the arcade mode button bashing and not really learning much about each character. The real longevity comes from learning a few characters full move set and then heading out into battle above the default difficulty. The ghost mode is good for this but also heading online and taking on all-comers. If you’ve not got online then playing matches locally is the best because this is visceral fighting and the way the game is meant to be played. There’s hours of learning and entertainment on offer here and with such a large roster of characters available means there’s someone to suit everyone whether that be buxom Irish assassin Nina to leopard mask wearing king. For long term players the new characters such as Bob, Miguel and Zafina are welcome additions.

The scenario mode offers a neat distraction from the main game and is geared towards single players. As an action fighting game it works well and takes some time to unlock, but what is great is being able to up the difficulty and play again with all the characters. There’s a lot to do here and money to earn so those who really get into the Tekken spirit will find lots of value here.

Tekken 6 is a great addition to the series and although the basics can only go so far without adding projectiles and fireballs, for pick and play moments it works very well indeed. For the more hardcore, there’s the usual learning and technical side to get to grips with, but it’s the inclusion of the Scenario Mode that makes the game stand out as more than just a 3D fighter with over-familiar characters. The customization might not be as deep or personal as in Soul Calibur IV but at least you’re able to tweak the look of your favourite fighters to suit.

If you’re after a solid and well respected 3D hand to hand fighter that is every bit as good offline as it is online then this is well worth the investment. It’s a shame the Scenario Mode does not feature co-op play but keep your fingers crossed and it should be added as DLC (for free hopefully otherwise there will be some tears).