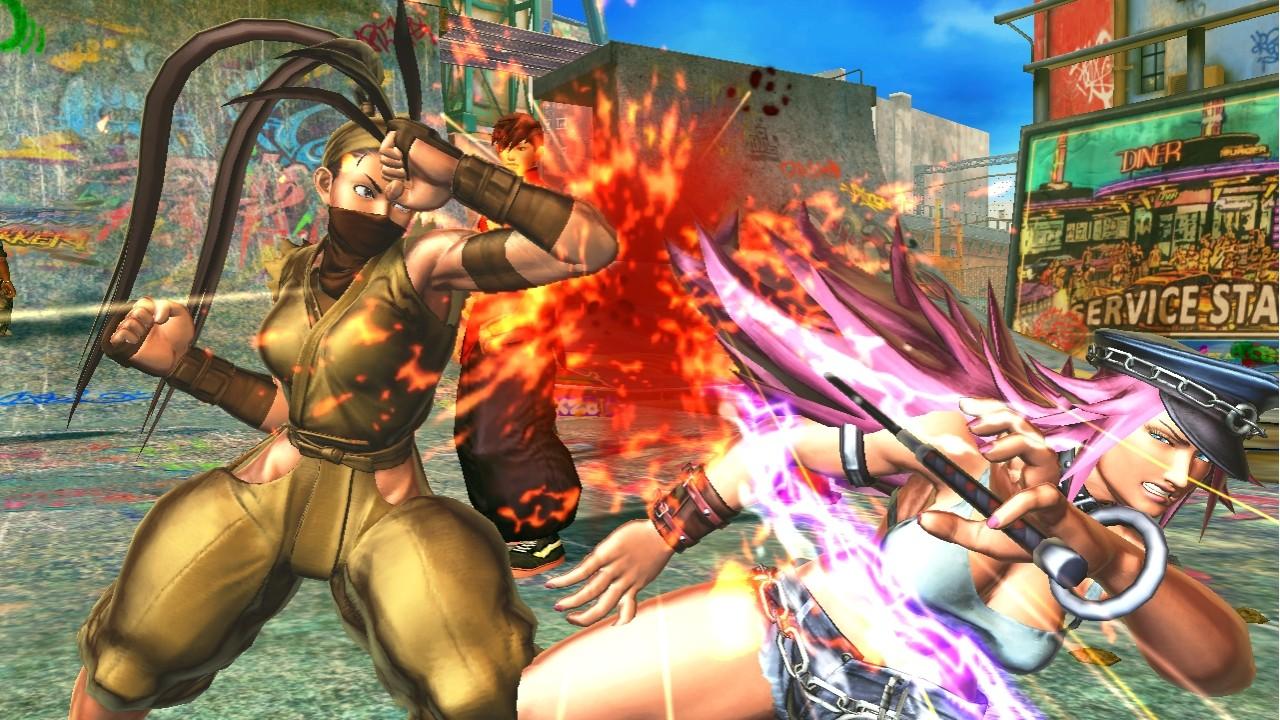 Street Fighter X Tekken is a perfect excuse to pit two famous fighting franchises together and see what the end result is. In this case, Capcom took the reigns and introduced Tekken characters into its popular Street Fighter game engine. The results are actually better than expected, as there was concern initially how the fighting style of Tekken would fit in with Street Fighter’s world, but it seems Capcom has done a good job or marrying the two styles into one comprehensive arena.

To begin, you’re presented with a training option which you are prompted to try as soon as you boot up the game. Dan is on hand to teach you the basics and how the more complex moves are performed. There’s not much to learn really, and considering the relative ease of use, if you’re a fan of either games you’ll grasp the extras pretty easily. Once training is complete, you’re presented with a list of options ranging from Arcade to Xbox Live play. The Arcade mode tells the rather unusual story as to why the two forces fight each other, but it’s not fleshed out and nowhere near as good as it could have been. The game features the most wonderfully animated versions of the Streetfighter and Tekken characters, a few cutscenes or animated moments in between fights would have served as a better method of telling a story as opposed to the few seconds intro you get when characters meet or correct partnerships are chosen. It’s a shame a lot more wasn’t accomplished with the arcade mode, as this ends up being a standard versus the computer AI exercise. Mortal Kombat proved that you can have a well integrated story in a fighting game, it’s just a shame Capcom weren’t focused in providing much of one here.

The Arcade mode also includes an option for interrupted play using the fight request feature where online players can challenge you at any time. It’s a shame there’s no options to set defaults for gamers wanting to jump right into fights, rather than go through the selection process each time. Once you make it through the various stages you’ll fight either of the respective franchise bosses, which makes for some frustrating moments as they last two of each are solo and have ultra stamina.

Once you’ve drained the Arcade mode, there’s a Versus option for up to four players, allowing for local fighting as teams of two. You can also use this mode to watch the AI fight itself and play solo versus AI opponents of your choosing. For more practice options you’re able to train against a standard training bots. You can also select a Challenge mode which tasks you with the choice of either fighting opponents under set conditions, or performing the more difficult specials and combos. There’s some minor editing on hand to change the colours of your chosen fighters, but this is limited to just a few set colour palettes instead of letting players use many unique colours.

Street Fighter X Tekken provides some neat fighting and although the core mechanics will feel familiar more to those who play Street Fighter games – this is a Capcom game so expected – there are a few differences to make the experience feel unique. Capcom introduced a gem system which allows players the choice of customizing battle abilities which can be triggered during fights once certain conditions are met. With things like auto countering throws, easy special move inputs , increased speed etc. there’s enough here to make each opponent feel unique especially when playing online. It’s a good feature to include, but there perhaps should be an option to play with gems disabled, again more so with the random challengers who can interrupt arcade mode play.

The Live features are as expected, with Ranked matches on offer for the more serious looking to raise their Battle Points, but no options for casual one on one play except in the endless battle mode. This is not the most user friendly of online set ups, and with competition levels quite high, latency issues for some, and no real way of casually practising against humans make it an unwelcoming place for newcomers. There are replay options for players to check out how others are playing, but this is perhaps going to be alien for newcomers.

Street Fighter X Tekken is a colourful looking game that uses the same art direction as seen in Capcom’s recent Street Fighter IV series of games. There are few stages though, which is a shame as the game could have done with some more environments, especially those that are multi-tiered and filled with background animations. In general, the game’s looks can’t really be faulted as it looks and feels like you’re playing an anime.

The audio is the usual electronica in the menus and during fights, with audio for all the characters being functional rather than oscar winning performances. There’s a fair bit of humour thrown in to spice things up which is good to see the game not taking itself overly seriously. What is perhaps neat is being able to change the voices of each of the characters from their native Japanese to English or vice versa. This is a great option, although purist will no doubt stick with the original set up which favours more Japanese voice actors.

If you like fighting games then Street Fighter X Tekken is a worthy addition to the pile, however, there does seem to be a lack of modes on offer for the single player and online audience – such as team battle, survival mode etc. If we compare the extensive options in the last Tekken game for example, it makes Street Fighter X Tekken feel a bit bear bones. There’s also a limited number of options in terms of costumes, and stages which does seem to suggest more will be available as downloadable content which is a shame because they will no doubt not be free of charge. As it stands, the game has to be marked down as a result for not providing the same value for money its peers offer. There’s a solid, highly accessible and well polished fighting game here, but with so little to do makes for a muted experience until Capcom no doubt release the full updated “Super” version several months later.