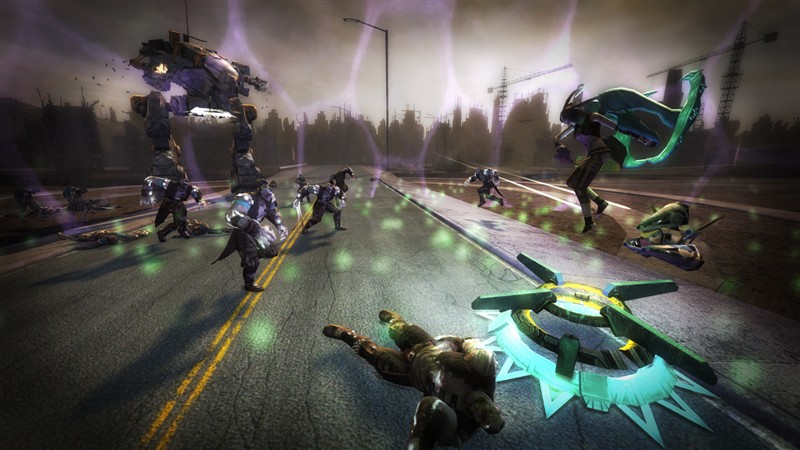 Real Time Strategy Games (RTS) games are becoming more and more popular on consoles and with the most recent arrival of Halo Wars, which takes a highly popular franchise and regurgitates it into something entirely different, the once PC exclusive genre is now making waves in other areas. The main issue that gamers will bring up with console RTS games is the control scheme and how complex commands can be issued using the standard controller as opposed to a full keyboard and mouse. Thus far, developers have done a very fine job in adapting the gameplay to accommodate the limitations of a controller and so I think we can step beyond worrying about how an interface is going to work. Well that leaves a whole blank page for the gameplay and whilst some developers are trying to reinvent the tried and trusted with their own gameplay tweaks and quirks, it’s interesting to see what new ideas are being produced for the latest RTS games.

SEGA has been brave, because although increasing in popularity, the RTS genre is still very niche when compared to the likes of first person shooters, racing or free roaming action titles. Stormrise from Creative Assembly is the latest RTS game to appear on Xbox 360 featuring Humans versus mutants, and with a new gameplay feature called ‘veticality’ means that gamers can enter battles on the front-lines but also make full use of the 3D space offered. Does the mechanic work, or is it another attempt at making the game stand out from its peers?

Stormrise features the usual modes of play such as a single player campaign which can be played in one sitting or as individual missions. A skirmish mode for up to 8 players (human versus AI). A multiplayer mode where you can either hook up all system link, or play online with and against your friends, and enemies. The story mode is probably the best place to start to give you an idea of how to play, and by the time you’ve beaten the 12 missions you’ll be ready to tackle the Skirmish and multiplayer modes.

As you would expect, Stormrise uses the basic RTS formula of having bases, various units and powerful lead characters. However, rather than copy what has gone before it, Creative Assembly has tweaked the basics to suit. For starters you take control of a commander character who, as you would expect is pretty powerful but by no means a one man army. From this starting point you can then move to any unit under your control and then issue the appropriate orders using said unit. The basic structure places various capture points, or Nodes on the map where once captured and under your control will enable you to build up more energy for your overall army, or set a point for producing more units. The Nodes are strategically placed, and can also be upgraded for defensive purposes. The more nodes captured and controlled ultimately means you stand a greater chance of success, although I will say that capturing a fully upgraded opponents node can be pretty tricky – perhaps too tricky.

The units that can be produced are pretty varied and have the basic abilities you’d expect like defense, long range, powerhouses and grunts. It’s hard to determine whether there is a rock/paper/scissors element because of how many units can be deployed at any time. It’s possible to have huge armies on screen at once and thus makes encounters somewhat deceptive. Again, the nodes play a big role in the gameplay beyond merely acting as a command point, because these can eat away at your armies in a blink of an eye. In fact at one point early on in the game there is one particular node that can take on everything you throw at it.

I’ll be honest, I’m not the biggest RTS fan and during mission three versus the node from hell, I was going to give up and call it a day (after hours of battling and getting nowhere). There is an element of luck involved, and with some poor game scripting means that it’s hit and miss whether you’ll be successful or not. I found this to be a pain, because there was really no learning involved as I kept trying new tactics and still got my ass handed to me on a platter adorned with lettuce and humble pie. Once I had beaten this node early on, things started to get better. Note to Creative Assembly – if you don’t want gamers to give up on your games then try to not put something so painstakingly difficult during the early moments when players are still learning the game’s nuances. Gamers with less patience would have headed straight back to the store they purchased it from looking for a refund.

Right, now that little rant is out of the way, what about the game’s Verticality feature. Well this is an interesting device for an RTS game but in reality is not really something that is paramount to success. The playing fields are most often comprised of buildings and other raised areas, as opposed to a relatively flat space. What this enables players to do is gain some leverage from above the enemy and rain down fire upon them (Sniper class characters being great for the task). It is a likable option, but due to the nature of moving quickly across the terrain to capture nodes, is somewhat redundant in my experience. I don’t think I used the feature at all bar one of my unsuccessful attacks against the bloody node in mission three. I’m sure the more devious players will find ways of using the height to their advantage in the skirmish or online modes, but the single player missions really don’t require it.

Stormrise is far from perfect, and to be honest I am surprised and horrified that it has been released in such a sorry state. There are way too many glitches that will have you seeing red rather than be entertained. To begin the list, I encountered clipping (walking through solid objects), units dying from…nothing. Units getting stuck on the scenery and then warping, friendly units shooting at each other, units targeting the least threatening opponents…I could go on, there are so many that SEGA must have really rushed the developers in getting the game finished with the hope that patches would fix most of these. Hey it works for Gears of War 2, so why not? It’s shouldn’t be an excuse, and as I’m playing the game, my experience as it stands is far less that what it should be.

I think my biggest gripe is with the game’s Whip feature. It’s pretty cool when it works, but once things get a little hectic, becomes a royal pain in the ass. Basically the right thumbstick allows you to quickly highlight any unit on the field (represented by an icon) and the then immediately snap to that unit in the blink of an eye. It’s very intuitive and makes navigating long distances a breeze. However, due to the icons which you have to carefully highlight filling the screen you’ll often not be able to snap to the desired unit right away. It then becomes a little too fiddly for its own good. This is a shame because like I said, when it does work (when there are fewer units) it’s an excellent idea.

The rest of the game’s graphics are decent enough for the genre, but nothing that is going to blow you away. There’s a decent amount of atmosphere in the varied environments, but with the many issues that plague the game, it does detract from the overall enjoyment you’ll get from moving around large open playing fields.

The sound is pretty typical and features a thumping soundtrack during encounters (which is often) and more mellow sounds as you build up your resources and travel the landscapes unhindered. The spot sound effects are as you would expect, such as gunfire, explosions and of course the cries of those who perish. The story mode features a cast of crazy characters who provide cliche but reasonable performances, although I will say one particular female character seems so utterly suggestive when she talks that she’d probably fit right in with a porno flick. Whoever wrote the dialogue must have had a field day with her character, and I wonder what his/her brief was?

Stormrise offers three levels of AI difficulty and looking at the story mode will last a fair while (especially if you get stuck facing the killer node in mission three – I apologize for keep making references to it, but I think I’ll have nightmares for quite a while yet). Once you’ve exhausted the story mode, the skirmish mode is where you can start experimenting with a free-form game experience. The online side of the game is certainly a cool bonus, but unfortunately you’ll need to hook up with a friend who also has the game if you’re to get the most out of it.

The premise behind Stormrise is pretty decent, commendable in fact as there are some good ideas on offer, yet the execution leaves little to be desired. Like I said, I am shocked and horrified that it has been released in such a state. SEGA must think most gamers are idiots if they are to buy a game under the premise that a patch will resolve the issues at a later date. There’s no excuse really, and as it stands, looking at the game how it is today, I can’t recommend it as much as I would like to. Fans of genre who have bucket loads of patience will probably overlook the flaws and gain some semblance of enjoyment from it. Anyone else is probably going to feel like they wasted their money – pure and simple. If you must try out the latest RTS game on Xbox 360, then I recommend you rent first and see how you go with that. If you’re not into RTS games, then avoid completely as this game is far from accessible.

I’ve enjoyed moments of Stormrise although I have had some major hair pulling moments, and really wish the developers had more time to polish the product before it was released. The ending leaves some traces that a sequel could be made, but before that can even be a twinkle in the creative eye, Stormrise needs some major fixing before it can truly be taken seriously. Had the game been released in a more finished state then I probably would have awarded the game a solid 8 out of 10, but as it stands there are just too many negatives which knock those points off.