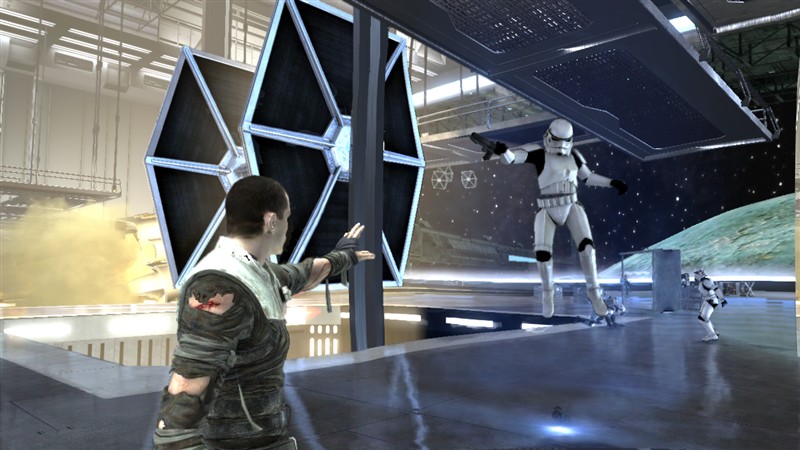 LucusArts’ Star Wars: The Force Unleashed has been a long time coming, and after some impressive tech demo movies which showed off the game engine released what feels like years ago; fans of the saga have been patiently waiting for this game. Well the wait is over as gamers can now assume the role of Sith apprentice Starkiller, who under the watchful eye of Lord Vader himself, sets out to overcome the rebels and their supporters.

The Force Unleashed is a third person action game that plays in a very similar manner to the Xbox game, Psi Ops in that a big feature of the game is using force powers to lift up objects and live enemies, and then hurl them into walls etc to cause them massive damage. Although Psi Ops was first to utilize this feature in a game, the whole Star Wars force lends itself well to the use of these powers for a video game. The main premise of the game is to go from point A and reach point B, whilst unleashing your force powers on hapless and not so hapless victims. You might think that being a jedi knight equipped with a trusty light saber would make you most powerful against the toughest of foes, but ultimately as you play through the game, you’ll find that being a jedi isn’t necessarily all that it’s cracked up to be.

I think for most part, the developers have a conundrum where by, to keep things as interesting for the player as possible they’ve got balance out the fact that it would be far too easy to allow players to just wade through the game hacking and slashing without much care for their own health. So what they’ve done is create enemies that are immune to the force powers and to a certain extent the light saber’s power and so whilst you might be able to cut an AT-ST in half during a QTE moment with the light saber, this does not work in the same way against a standard Stormtrooper. I think those without the imagination will find that this is quite annoying, but it’s obvious LucasArts have created a game that can be played by all ages and fans of the series. Lopping off limbs as you would expect, would certainly increase the age rating for the game.

So you’re presented with gameplay that allows you to be a bit more free form, in that you can opt to hack and slash away at enemies, using various saber combat moves (which can largely be ignored if you wish). For those of you looking for a little more depth, then learning the swordplay nuances, certainly has some benefits and prevents the game falling into realms of repetition. You then have the option to use the forces powers and be a little more imaginative in how you dispose of your foes. In fact, the game rewards you with more experience points for utilizing your powers and the environment more, although I found that the control method takes a little time to get to used to, and in the heat of battle sometimes whipping out the saber is the best course of action.

The other free form aspect during play, is the whole element of levelling up the character to suit your play style. It’s presented in a very basic manner and almost resembles that seen in Fable. You’ll gain points in one of three areas, that relate to Force Powers, Combos, and general Skills. As you level up you’ll gain one point in each area, where you can then assign the points to various facets in each. Although to be honest, by the end of the game, you can pretty much max out all of them. This is an interesting element and adds a slightly more personal touch to the character as you choose to develop the skills most suited to how you’re playing. I actually found that this becomes far more crucial and tactical when attempting the toughest difficulty. What is also worth noting, is the fact the game offers an almost RPG approach where you can level up your character by replaying earlier missions before deciding to move on and tackle the rest of them. This means gamers can almost “farm” for experience making the later levels that little more easier. It’s an interesting mechanic to use for an action game of this nature and certainly takes away the frustration of being beat down on one level with feeling of making no progress.

The game takes you on a journey across multiple environments from inside spacecraft to swampy organic environments (10 levels in total) although two of them are repeated environments. That said, there’s enough variety here to keep you interested, and although there’s a fair amount of corridor running around, you’ll also be faced with some impressive outdoor or more open expanses. I actually thought the graphics where pretty good for the most part and provide a slick looking game world to mess around in. The game engine works well and being able to pick up objects and hurl them at will is a welcome addition to merely having standard physics. For the most part the graphics hold up very well during combat, although one annoyance is the fact that when your character is knocked down to the ground, the rag-doll effect makes it frustratingly hard to actually get up again.

The soundtrack is typical Star Wars fare, and you’ll instantly recognize the music and sound effects lifted from the movies. This creates an authentic Star Wars experience and will please the fans no end. I can’t really fault the sound because even the voice acting is surprisingly of a high standard, including Lord Vader, who isn’t voiced by Mr St James but has a stand in that does a grand enough job.

Now here’s the stickler. If you’re going to run around the game world hunting for all the easter eggs and secrets, then of course the game is going to last quite some time. However, if you’re the type of gamer who’ll select the default difficulty and merely run from point A to B without really taking it all in properly, then your experience is going to be rather a short lived one, depending on your skill. It is entirely possible to run through the game very quickly. Luckily there are two extra difficulties to attempt which offer a far more engaging experience which will mean death becomes a habit. So in this respect, you’ll certainly get enough bang for your buck, especially If you’re an achievement hunter. You can also mess around with a maxed out character by replaying earlier levels if you are that way inclined. Sadly, there is no multiplayer component or leader-boards to add further life into a strictly single player experience.

Star Wars: The Force Unleashed is a decent enough effort and will be more appreciated by the fans of the saga. As a stand alone action game, then it’s a pretty mediocre affair, which is only really driven by the force powers as a gimmick to end all gimmicks. But, like I mentioned, this is nothing new and has been done before in other games. Aside from some incredibly frustrating moments from time to time, and some cheap boss battles, there is a semblance of fun to be gleaned from this game, and that goes for fans and non fans alike. However unless you are a huge fan of the series, then this is most likely to be rental fodder, albeit a decent one at that. If you are a fan of Star Wars, then you will undoubtedly will be buying this game regardless of reviews and other peoples opinion, in fact you’re probably not even reading this review!