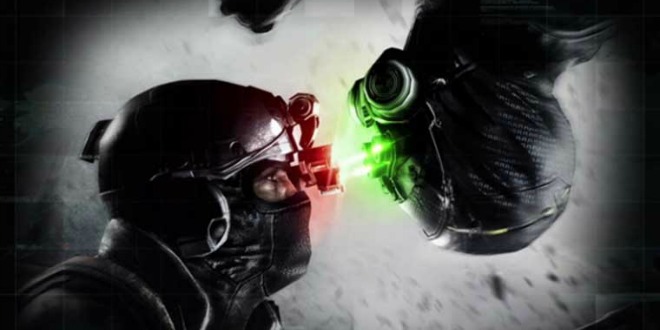 Ubisoft released a new video which takes an introductory look at the classic Spies versus Mercs mode from the previous games and how it works in Splinter Cell Blacklist. The video is for newcomers and shows off the basic premise of the game and the abilities of the two playable character sets. What’s more interesting is towards the end of the video, we’re told by Zak Cooper that there’s more to come in the form of 4 versus 4 play which is interesting news.

The original spies versus mercs game from Pandora Tomorrow was fairly solid and became a fan favorite for a select number of gamers. The style was much more methodical than your regular twitch shooter and called for mic based team work for gamers to really succeed.  It was obvious that Ubisoft were on to a winner with its gameplay formula that was like nothing else at the time, and cemented itself as one of the classics of the last generation. The revised version in Chaos Theory was icing on the cake, then next gen happened and dampened the series.

Where previously the lure was being on the spy team, and amongst the quitters, there was fun to be had whatever side you played if you knew what you were doing. Ubisoft, pandered to a select group of players who adopted more Rambo style techniques as opposed to playing stealth, often referred to as Rambo Spies, Ubisoft included a death match mode to suit those players and thus was the start of a change for the original idea they had. Perhaps it was a case of the community voice having power, or simple sales – but it has to be said, Chaos Theory was and still is a masterful product. Either way, the last gen games went out with a bang and took with it one of the most intense Xbox Live gaming sessions with it.

Cue Xbox 360 and PS3 and an early launch period game for the multiple format release of Double Agent which totally changed the ethos of the spies versus mercs game to make a more accessible offering to entice the masses. This included the beeping heart beat tracking which completely made the spies former shadows of themselves. A shame, and something not ever rectified until Splinter Cell Blacklist (hopefully) which looks like returning to its roots.

The news of 4 on 4 play is interesting and would make for a more crowded game using some of the old school maps, but if larger maps are employed, then some excellent opportunities for dynamic objectives and coordinated moves are looking possible. As the video suggests, we’ll have to wait and see what’s in store. Let’s just hope Ubisoft doesn’t screw it up.