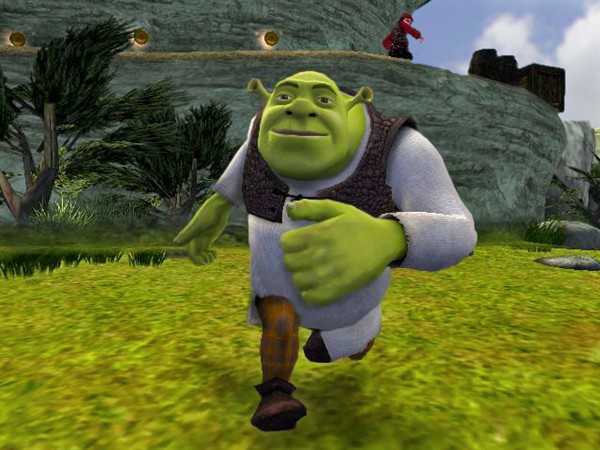 Shrek fans can rejoice as not only is a new movie on its way but a game to go alongside it for you to continue the adventuring when you get home from the cinema. This will be the third Shrek movie tie in game to appear on consoles and therefore must prove that there are fans the World over who enjoy his Scottish Ogre ness. The story seems related to the movie where once again Shrek has the task of making sure the right person gets to take the throne to become ruler of Far Far Away. It’s a dirty job but someone or ogre has to do it.

Shrek The Third is an adventure platform game of sorts and whilst there is a fair bit of jumping around you are also encouraged to break as many inanimate objects as possible as you traverse the 20 odd levels. I suppose this comes under exploration as it is possible to ignore breaking up crates and boxes and simply head to the end of the level with the minimum amount of fuss.

Shrek The Third has a fair amount of combat thrown in and this is versus a motley crew of adversaries such as Pirates, escaped prisoners and the usual hired guards who come equipped with swords and sometimes shields. Combat is rather a simple affair with two main attack buttons and the option to perform a special finishing move should you need to. Yes there is a block button but to be honest most gamers will get by simply by hammering away at the attack button.

There are some super moves available which can be performed when enough fairy dust is gathered from fallen foes or other breakable objects. Gamers can store up to three of these moves or once the meter is filled enter a pseudo bullet time mode where time slows down for all but the character you are controlling (which isn’t always Shrek himself). As I say the combat is rather simplistic but at the same time highly accessible and very easy to master.

As mentioned earlier, throughout the story you will take control of various characters who each display their own traits, although combat with these guys still feels the same for all of them despite some being armed and others unarmed. It’s nice to have some variety with the characters and this will no doubt please fans of the movie who know that although Shrek is the main character the others are also entertaining as well.

For the more in depth player the game has a number of quest which you can undertake during missions. Again these are optional but there should you wish to explore a little. Things like finding hidden artwork to discovering hidden mugs are what gamers can expect although there are some tough ones thrown in there such as completing levels without dying. This in itself is quite a challenge on some levels especially as there’s some nifty jumping required at times.

Graphically Shrek The Third looks pretty decent and with some well rendered character models, gamers can feel like they are controlling their own animated movie of sorts. The levels are bright and cheery and capture the flavour of the movies quite well. One thing that did annoy me was the fixed camera used throughout which on occasion made things a little difficult; especially when crucial jumps were required. A more dynamic or free camera would have worked better in some instances.

Other complaints with the graphics would have to be the repetitive nature of the enemies as more often than not you’ll be coming up against the same foes time and time again. A little variation would have gone a long way here.

The sound is of a reasonable standard and with voice actors providing decent performances all round, fans of the movies will be pleased with the results. That said, the general in game sound is pretty standard fare and won’t be sending you into an aural frenzy of excitement.

Shrek The Third has 20 levels to mess around with and when you consider the number of quests in each level; means you will probably be playing them more than once if you are hunting for achievements and other bonuses. You can purchase various performance enhancing outfits in the game’s shop with coins found throughout your travels and this will help if you are tackle the game’s more difficult Grimm difficulty. There are some mini games available for 2 players locally and these add some multiplayer madness to proceedings. In general Shrek The Third isn’t particularly long but will keep you entertained whilst it lasts.

Shrek The Third is a decent all encompassing adventure action game which features puzzling, platform and fighting elements. It’s certainly an entertaining game but somewhat on the simple side. For younger gamers this probably has all the correct ingredients to make it worth your while; however for older gamers whilst the game is charming it’s not really going to test the grey matter or your gaming skills that much. The whole premise of Shrek the disgruntled anti hero is captured well in the game and I think for fans especially this is worthy of a purchase. However if you are skilled in any way or devote much time to gaming then Shrek should only be considered as a rental. I think it’s safe to say that this is very much a younger gamer’s game and for them I’m sure there’s a lot of fun to be had in Far Far Away.