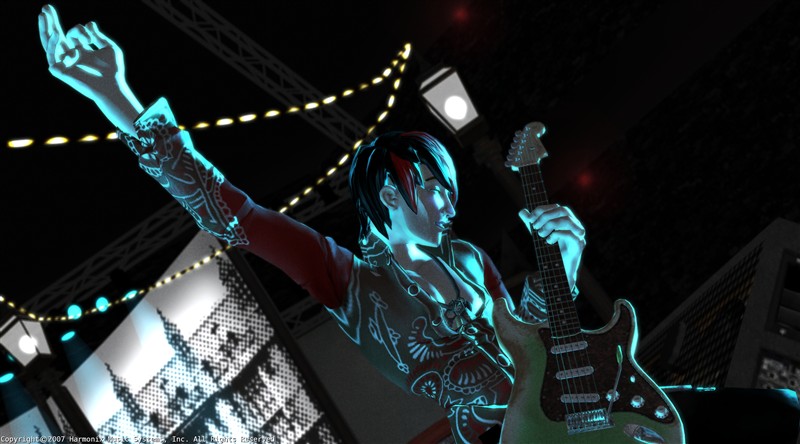 Rock Band released in November 2007 for North Americans and so they’ve had months to enjoy the delights of Harmonix’s work. Us Europeans however, have had to wait until now, some six months later to get our hands on what is arguably the ultimate party game. As some sort of compensation, us Europeans have some additional tracks that our North American folks have to pay extra for and download. Has the wait been worth it, and is Rock Band’s drum, guitar, mic and game package good value; considering it costs between £140 – £160 which is a darn sight more than the US folk have had to pay?

Rock Band offers three modes of play, four if you include the Bass guitar option for guitarists. The premise is simple, plug in a pretend guitar and drum kit or a real USB microphone and then rock out to the 68 odd tracks the game offers. Each of the three styles is very different, although those of you used to Activision’s Guitar Hero series will instantly notice the similarities. The basic gameplay for guitar and drums at least, revolves around following colour coded on-screen prompts and then on the “beat” of the track playing, hit or strum the notes on the related peripheral. In the case of the drums there are four pads with each having its own colour, Red, Yellow, Blue and Green. The same goes for the guitar, which has buttons on the fretboard of the same colours. The difference with the guitar is that you have to strum as well to activate the notes. It’s certainly an accurate mimicry of playing a real guitar, minus having to learn complex fretboard work. The only difference is the vocals which require you to use you own voice, to sing along to the track playing, in a similar manner to karaoke.

The game scores you based on how accurately you perform the notes, with a rating shown for each section of a track. If you perform flawlessly during one section, then you can build up a combo and score multiplier. Your final score is the sum of all of the sections – which is placed on a leader board if you’re connected online. Your overall performance is graded by 5 stars with 1 being weak and 5 being excellent.

Rock Band offers single player modes for those of you who want to jam using the drum kit, guitar or vocals alone (obviously one at a time). Here you create a character, either male or female and then go through a story mode of sorts whereby you perform each of the songs in order by visiting a major city across the world. Each city has five tracks to perform, before you move onto the next area. Each area gets slightly more difficult but with four levels of difficulty to choose from before you start your career, there’s something for everyone.

Rock Band also offers online play, where you can team up with your friends or random people and jam together. Alternatively, you can go head to head in some competitive modes, such as tug of war. Here you try and out perform your opponent by hitting/singing or strumming the notes as accurately as possible.

There’s also a local multiplayer mode, where you can get friends or members of the family to join and create a band. This mode is interesting because you start out at the bottom and work you way up to rock stardom. Hiring managers, gaining fans and vehicles etc along the way. It’s a great excuse to get the family or friends together and have some all out fun.

Rock Band has a very functional screen display, in that most of it caters to your note visualization so that you can see what’s going on. However, in the background, you can see your character and other musicians playing the music. Other than your own character that you’ve created, the band members seem random and come in all shapes and sizes. Your own character can be customized to suit your needs, and as you earn money you are able to kit them out with more clothing and fancy instruments.

The in game graphics are pretty good as the characters animate very well and genuinely look like they are playing the current track. You’ll even see facial expression and such like for the characters, which is rather cool. The venues all have their own themes and audience sizes and there’s lots of lighting effects and such like to really put you there. However, other than once you’ve learned a song’s patterns (it never changes unless you up, or lower the difficulty) you won’t see the backgrounds as much because you’ll be too busy focusing on the on-screen notes you have perform. So really the backgrounds are good for atmosphere and those observing – although during a break where the guitar solos or drum solos you’ll get a chance to have a proper look.

The most important aspect of the game is the sound, because if the track listing isn’t right, or features songs that you don’t know, then the game is going to have less of an impact. Well, as the name implies it’s strictly rock music. So do not expect any dance music or soul, R&B country etc etc. Coming from a dance music background, I found it hard initially to relate to the majority of the songs on offer, and although there’s an impressive list of downloadable tracks to boost the numbers, the game is limited if you like other styles. However, after some playtime, the songs do grow on you. I never thought I’d actually like “Don’t fear the Reaper” by the Blue Oyster Cult, but alas, it one of my favourite tracks in the game. There’s plenty of songs here, that range from the 70’s and onwards and I’m sure, like me you’ll gain some favourites along the way.

Not all of the songs are originals, as some are cover versions, but really you’re not going to be bothered because all the tracks sound as authentic as you can get. The game’s program is very clever in that your button presses mute and un-mute parts of the track when it plays. With the vocals for example you can actually control the volumes of the original vocalist and up the volume of your own efforts. This creates the feeling that you are actually playing the instruments and works really well. There’s also some excellent audience sounds to really put you onto the stage. Although they will boo you off stage if you perform badly.

As mentioned earlier there’s a few modes to mess around with and plenty of tracks to test your skills against, with the four levels of difficulty (and a practice mode). There’s also the element of beating your high scores, or your friends as well as merely playing together on or offline. The game in general is very fun regardless of scores or whether you’ve played a song before. It has a kind of timeless element to it, due to the high fun factor on offer. My only real gripe is that you can’t create a band in the Band story mode online as this is reserved for offline play only, which is a shame. And if you’re alone, they you’ll have to try your hand at singing and playing drums or guitar at the same time, due to the forced minimum two player requirement. Your own stamina has a big impact on how long you play the game.My voice got real croaky after hours of belting out tunes. My arms got tired and ached after playing drums and guitar. However, you’ll always come back for more!

EA have promised more downloadable tracks as time goes by, so there should always be a healthy roster of new tunes to try your hand at, until Rock Band 2 at least.

Having not really been a fan of these party type games in the past, I was a little skeptical when the Rock Pack arrived for me to review. However, after hours and hours of playtime with friends and alone, I have learned to appreciate the appeal of this game at least. Rock Band is certainly a game that most if not all gamers should be able appreciate. It oozes fun and has a highly addictive nature, even if Rock music isn’t your flavor. I really did enjoy belting out Roxanne by The Police and felt proud to be ranked in the top 100 worldwide. The same goes for belting out “Dead or Alive” by Bon Jovi. For guitarists, the similarities to Guitar Hero are evident and might dampen the guitar experience a little. The way you have to look at the game, is a) the track listing and b) the overall package of having the addition of drums and vocals. This adds another dimension to the gameplay, and as I said, if you’ve got friends or family around, you can have a real blast. I come from a musical background and slipped into the roles easily. I think for those of you who are less able, the game might appear daunting at first, especially in respect of the guitar and drums, but I found that it’s highly accessible and that you’ll probably get the drift after about half an hour, and then it clicks. If not, the fun factor also lies in the fact that it’s great to see yourself improve as time goes by.

The main contention with purchasing the game is the price of admission, which for a game is a little on the steep side. However, there are some options available, as you can use the Guitar Hero guitar and Xbox Live mic if you don’t want to fork out for the full pack. I assume you can buy the drums separately. I’d say it’s worth it in general to get the full pack if you spend a lot of time with the family and friends, because you can’t really put a price on the levels of fun you’ll have playing the game in a group. For lone players, the fun factor is less, but with four instruments to play with, there’s certainly a lot of diversity to make up for being alone.

Rock Band is an excellent addition to the Xbox 360 line-up of games, and I’m sure Harmonix and EA will make good use of the equipment for future titles.