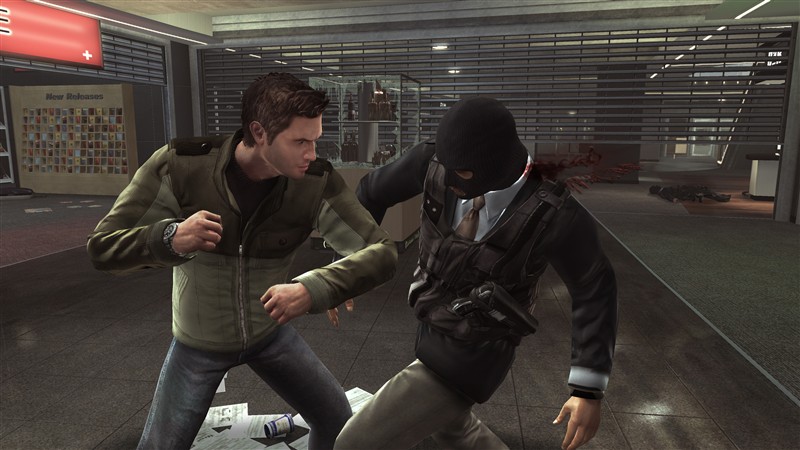 Movie tie in games usually end up as mediocre or worse gaming experiences, which can be put down to the fact that there is limited budget, limited time frame for development and of course a reliance on the movie license itself to sell the game. I’m not saying developers rest on their laurels, but something is usually amiss. The Chronicles of Riddick: Escape from Butcher Bay being one movie tie in game that is the exception. Robert Ludlum’s Bourne series of movies have wowed cinema goers for quite some time, and with three films available, there’s certainly a lot of source material for a video game conversion. Matt Damon, the actor who plays the leading character Jason Bourne, commands an air of expert innocence, yet a powerful and charismatic killer demeanor that brings the Bourne character to life on celluloid. However, the game version which released on the 6th of June 2008 (a long time after the movies) does not feature his likeness, but does contains all of the traits that fans expect from the character, and in this case a stand in Jason Bourne.

The game focuses primarily on the first movie, The Bourne Identity, which tells the tale of a government secret weapon (Jason Bourne) losing his memory and spending the entire film being chased, shot at and such like, whilst he tries to recall who he is. Unlike the movie itself, the game delves deeper into Jason’s shady past, where he’s basically a government assassin, trained to kill those that disrupt the balance of power.

From the offset, and like the very films the game is based upon, there is a distinct leaning towards action. Forget about spending loads of time searching around empty rooms or areas looking for objectives, because the way the game is designed is such that you’ll be kept under constant pressure to be on the move and tackling the various enemies who get in your way. The way the game handles this is via third person action with Jason able to sneak around or dart like a madman. As the game progresses, you’ll also be able to pick up weapons and start shooting up the place, and if that fails then there’s a heavy slant towards hand to hand combat thrown into the mix. To top it all off there’s one level which offers a driving scene which adds that little more variety into the pot.

As you play, you’ll be encouraged to do as the game requires you, it is rather forced but in some respects, fuels the action element to keep things interesting at all times. For example you might be escaping by running away in one moment, and then surrounded by enemies in the next, requiring you to fist fight your way through, finally getting into some longer ranged shooting elements. The seamless blend of the action is handled very well, and you’ll see brief sequences which introduce you to the next bit of the action before you resume control again. There’s also some Quick Time Events (QTE) thrown into to some scenes to keep up the interactivity. QTE events are where you have to press a specific button (X, Y, A, or B) on the pad to make it through. If you fail, then the result can be either painful (during fighting) or a game over screen and restart at the last checkpoint (which are very forgiving).

There’s certainly a very high cinematic approach on offer here, and whilst it does break up the actual gameplay to a degree, it can’t be faulted for really putting the player into the shoes of Jason Bourne. It’s a very novel approach and one that hasn’t been fully explored in other games before. It’s like an interactive movie in some respects, but in others it’s not because as a player, you do remain in control.

The fighting itself is quite a big part of the gameplay, and this offers a very simply dueling mechanic. There are two attack buttons, hard and soft attack, with charge up moves and combos also available if you experiment a little. You can actually engage in hand to hand fighting with the majority of enemies if you are quick enough. This includes, those who are further away and shooting at you – and despite the fact it could be easier to just whip out a sub-machine gun and take them out that way. There’s something about the fighting which is somewhat compelling though, despite its simplicity. It appears that you attack, your opponent attacks you back (you block) and it goes back and forth until one of you is knocked out. Luckily Jason can perform take-down moves, which can be activated when a special meter is filled. These are cinematic moves that use the environment, such as slamming an enemy’s head into a wall, or using a chair to smack them around the head. For the standard opponents, performing a take-down move usually results in a satisfying K.O, however, you’ll also encounter some rather tough boss characters, who don’t want to kiss the floor so readily. The boss fights are a little drawn out and can take some time to finally defeat them as you perform the see-saw style attacking of each other. Bosses can also try take-down moves on you as well, and so during fights QTEs make an appearance.

The cinematic quality of fighting is very good, especially the take-down moves, yet the overall movement is very rigid and there’s little room for moving around to get an angle on your opponents. This becomes more apparent when surrounded by three enemies at once. Sadly once you’ve locked into fighting mode, you can’t get out of it or sneakily pull out your weapon for a quick kill. I guess the fighting is the more humane part of Jason’s character, as K.O is better than killing.

The shooting mechanic is pretty standard fair and allows you to aim and shoot whilst moving, and also allowing you to get behind cover and pop out to shoot. There’s also some impressive destructible cover to spice things up a little. Like the fighting you can perform take-down moves which guarantee a kill in one hit, and what’s really special is if you can build up your take-down meter to max (3 slots) and kill three enemies in the one take-down. My only real complaint here is that the camera is perhaps a little too close to the character on screen, where the view is often obstructed too much; and this is despite the fact that you can shift him from left or right of the screen at will.

The driving section of the game is probably the worst part overall, and whilst it might be true to the movie it’s based upon, there’s a certain level of sloppiness to it. The AI cars seem too sporadic, and the fact that invisible walls block your paths and you have to reach checkpoints, takes away the cool factor of trying to escape the police. Perhaps the driving should have been a moment entirely made of QTEs?

The game uses Unreal Engine technology, and for the most part looks great. I think the real star here is in the character animations which are very realistic indeed. Jason’s character looks good enough and the levels he travels to across the globe are nicely varied and offer suitable cinematic moments to keep things interesting at all times and in line with the movie the game is based on. Other than the distinct stiffness to the hand to hand fighting and the rather sloppy driving mechanics, there’s not too much to fault here in terms of aesthetics.

As you’d expect, there’s a varied movie like soundtrack to accompany the action moments and of course to compliment the moments which Jason is sneaking around. The other sound effects are an assortment of whacks, explosions and gunfire which are as you would expect from an action game. There’s some neat radio chatter and communications with Jason’s superior during some missions, and in general the voice performances are of a good standard.

There are 11 missions in total, which I’d say will take around 5-7 hours to complete on the default settings. If you are more thorough in trying to hunt for the game’s hidden passports, then this may take a bit longer. The game is strictly a single player experience and other than replaying levels to unlock achievements and in game extras, there’s not really much more to see and do once you’ve beaten it. There is an additional Assassin difficulty to try your hand at, but essentially this just drags out the fight sequences even more and forces you to be more cautious during gun battles.

The Bourne Conspiracy is a valiant effort for a movie tie in game and captures the flavour of the movies it is based upon very well due to its unorthodox stop start action sequences and variant gameplay. I’d say you’ll get more understanding of the game if you’ve seen the first movie, as some sections are a little vague story wise. I’ve enjoyed playing the game and watching Jason kick ass via the semi playable cut-scenes; it’s just a shame that there’s no real replay value or more missions to mess around with. In fact the whole game is very linear and this hurts the game in some respects, but in others guarantees that players won’t be left scratching their heads as to where and what to do next. If you are looking for a fast paced action game and are a fan of the movies, then this is well worth a look and purchase. If you are just looking for another game to pass the time, then this is most certainly a rental game, as you’ll probably only play through it once without caring for the game’s secrets.