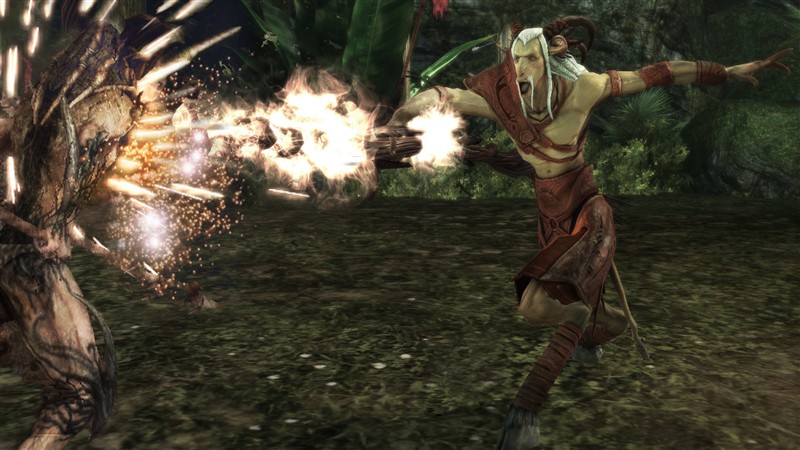 I have fond memories of the classic 1963 Jason and the Argonauts movie directed by Don Chaffey. For many years, it seemed like perfect Boxing Day, Bank Holiday fodder for afternoon television viewing. Codemasters alongside developers Liquid Entertainment, has brought the movie to life in Rise of the Argonauts which follows the basics of the movie, although seems to offer a little more insight into the Greek Mythology the original movie was based on.

The story is pretty straight forward; King of Iolcus (Jason) is left in despair on his wedding day, because a dark and mysterious assailant murders his fiancé before they can tie the knot. Well that’s one way of getting out of marriage, but as a King and a devoted partner, Jason’s love is absolute, and thus his partner’s death gives him the determination to not only defy the gods, but bring his loved one back to life. It’s no easy task by any stretch of the imagination, but by hunting down the legendary Golden Fleece, he should be able to use its power and revitalize his loved one. In the process of discovering the fleece, he and a group of warriors known as the Argonauts are able to uncover the dark legions who are behind the murder of his finance – thus saving Greece from their impending tyranny.

The game begins by thrusting you into the subsequent aftermath of the assassin’s attack. There’s little introduction as you fend off the dark forces, but this highlights the design choice, that Jason is no pushover as a starting character, and can easily hold his own in battle. As a sworn protector of the land he’s easily able to vanquish the enemy, and swears vengeance on those who stand in his way. The opening is a tutorial of sorts, and introduces the game’s combative element. Once you’ve cleared the game’s opening, you’re then pushed into a rather menial set of tasks where you’re required to spend a lot of time wandering around the palace, talking to guards, servants and ambassadors rather than getting on with the task at hand. Luckily the god Hermes looks over your fiance so that her soul does not wander aimlessly, or is lost forever.

For my tastes I found the game’s opening, or more specifically the mundane talking to NPCs absolutely awful, because any promise garnered from the first steps of combat were washed away by the running around with little purpose (other than to elongate what is perhaps a short game). The palace is not a large area, but as an introduction was quite a confusing place, and I often had to pause the game to access the rather vague map screen. You can just about distinguish a red dot that represents your character, and some blue and yellow dots which refer to primary and secondary objectives. In fact, I found myself pausing the game rather too frequently throughout my adventure to look at the map. A lack of on-screen mini-map or waypoint markers does remove clutter from the playing screen, but on the other hand, having to pause to view a map detracts greatly from any immersion the game is trying to purport.

The opening is very slow paced, and is perhaps enough to taint any enjoyment that should be gained in the first hour of play. Once you do finally leave aboard the fine ship the “Argon” the game does begin to pick up some semblance of pace. Although this is also largely down to where you head first. You’re given three options of where to go, and if one of them is the other populated city, you’ll discover another segment of the game that requires a huge amount of mindless and utterly boring side quests to undertake to advance the story. Once again, the city is pain to navigate despite its linearity, and means more pausing the game to look at the map. I really think it was a poor design choice to not offer the player some sort of on-screen assistance for navigating these labyrinth like areas. I might be exaggerating a little, but I can instantly feel that those gamers who are less patient than myself will most likely head for the eject button without any hesitation.

So, if you do persevere beyond the two city based areas, you’ll discover that the plot not only begins to thicken, but your enjoyment begins to peak somewhat. The story is actually quite good, and reasonably engaging, it’s certainly enough to incite you to see it to its conclusion. Once you’ve sunk your teeth in, and got to grips with the game’s pseudo leveling up process, which is strangely linked to the mundane side quests then you can start to appreciate what’s on offer here. The basics of leveling up Jason with new skills, is to spend points gained from completing the many tasks on offer with four gods. You basically complete the task, head to the pause screen again (yes it gets tiring), and then allocate points into additional combat skills and god powers. I found myself not really relying too much on these, and by the game’s end I had a huge bank of unspent points thus rendering the majority of the skills utterly useless. Sadly you cannot start a new game with harder enemies and your skills intact, so it seemed rather a wasted opportunity. I guess for some players, it’s a pleasant option to have a huge set of combat modifiers to tailor the game to your own play-style, regardless of whether these are of any use or not. Perhaps playing on the game’s hardest difficulty would allow them to be more useful?

Looking at the combat, you’re able to perform very few attack moves with two buttons being the main attack focus to perform combos. In fact, the whole combo system is rather unorthodox as it also requires pressing the shoulder buttons to cycle through the three main weapon types mid-combo. You have swift swords, slow yet powerful maces, and sharp, pointy spears at your disposal. Couple these with an over-sized shield and you’ve got a walking tank, and no I’m not talking about the ridiculously massive Hercules character (more about him in a moment). The premise set by the game is that each weapon type is effective against particular enemies, and so being able to switch on the fly helps greatly in tackling the weird and wonderful opponents on offer – luckily you do not have to enter the pause screen here. The enemies are basically hack and slash fodder, with little brain requirement to send them back to their makers. I guess there is a glimmer of enjoyment from slicing up opponents, especially when you get to see dismemberment in glorious slow motion.

The god powers which you can map to the d-pad are a neat addition, but I found were rather obsolete for the most part using the game’s medium difficulty setting. In hindsight I should have upped the difficulty as the game is incredibly easy – so be prepared to head to the Legend setting if you’ve got an ounce of skill. In fact I think I only died twice throughout the entire game, thus making encounters too predictable and somewhat of a distraction from the story.

During combat you do have an AI partner or two depending on where you are in the story. I really felt detached from them, and barely noticed when they were knocked out and needing revival. Their implementation felt totally unnecessary as there was no real affiliation with them during combat. It’s basically every man/woman/beast for themselves. What would have been more effective, is if you could chain attacks together or there were more repercussions if they were downed during battle.

The graphics are not a strong point for this game, as they are pretty poor overall. There’s a real lack of texture detail despite some well crafted styling, and the whole look just screams budget title. If you’re a graphics whore, then this is perhaps a game to avoid completely. The character models are reasonable looking but animate very badly. The running animation in particular is laughable. Then we have Hercules, an entity in his own right and something of a comical character to have in this over the top game. His dialogue might be serious, but one look at his design, and you’ll wonder what the character designers were smoking. His over-sized frame is pure comedy gold for all the wrong reasons.

The game also suffers from some horrendous graphical hiccups beyond a lack of texture detail. On several occasions, the game’s camera locked up on me, requiring a quit back to the menu. Other times, Jason got stuck on the scenery unable to break free. Often there’s a sense of poor collision detection when slashing away at enemies as you can never tell if your bludgeoning is connecting or not. These issues dampen an already sopping wet experience and generally point to a severe lack of polish for an Xbox 360 game.

The audio is probably the best feature of the game, with some reasonable performances from the voice over cast. There’s a variety of characters, brought well to life with some serious and witty dialogue, which means for the story purposes, you’ll be well entertained if you can endure the rest of the game. The music is also well produced and seems like it has been loving crafted to suit the mythological theme. It’s a shame the rest of the game doesn’t hold the same high production values.

Rise of the Argonauts isn’t a long game per se, and I would guess will take around 12 -15 hours to complete on the default setting. There are a lot of additional tasks you can try and complete, but these won’t really add too much to the experience other than more menial tasks. If you’re an Achievement hunter, then by being thorough and making some notes of what choices you’ve made, alongside some back-up saves, you should be able to get the majority if not all of them in one play through. For me, I can’t see myself starting over again, to grab the last few hundred Achievements, so I would suggest making the most of your first play through the game.

Rise of the Argonauts is not a terrible game, and in some respects is quite enjoyable, especially in regards to its story. However, the low production values in the gameplay and graphics department, does mean that you’ll possibly find enjoyment is severely hindered and your patience somewhat tested. There’s some really bad design choices which may help prolong the game, but ultimately could turn gamers off completely. If you like action/adventure, then there are probably a lot more games out there worth spending your money on. If you are a fan of Greek Mythology and can overlook some of the game’s negative issues, then you’ll garner some enjoyment, albeit somewhat muted. I would recommend this game as a rental only, because there’s really nothing worth shouting about here; it’s adventuring by numbers, and its only real saving grace is a semi-engaging storyline.