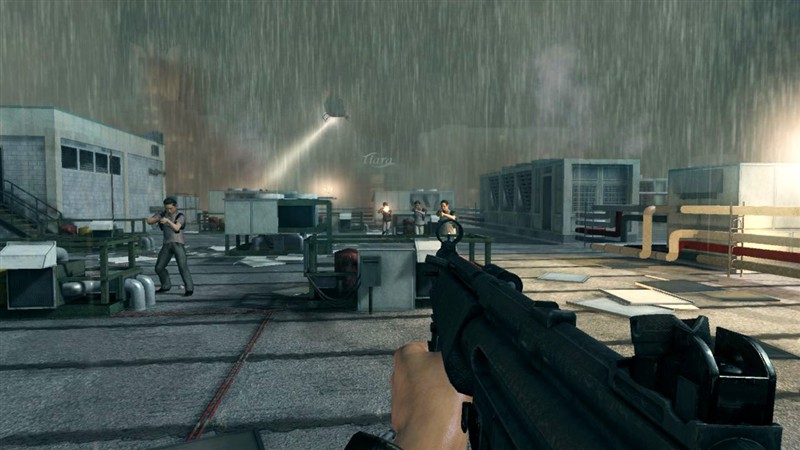 James Bond has returned although for Xbox 360 owners, this will be the first and no doubt not the last Bond game for the system. The game is based around the just released movie of the same name Quantum of Solace, although having played the entire game now, there’s a fair few missions related to the earlier Bond film, and debut for new Bond actor Daniel Craig, Casino Royale.

Quantum of Solace or QOS is a no nonsense first person shooter in that it cuts right to the chase and provides instant action and gratification for you placing the disc in your console. The game uses the Call of Duty 4 game engine, which many of you will be familiar with the style of play; however Treyarch have actually excelled themselves in terms of tweaking the AI to make for a more engaging combat experience.

At its heart QOS is pretty much a corridor shooter in that you cannot deviate off route due to the linearity of the levels. However that said, it’s not the level design that is adaptive, but more the AI and the encounters you have. The game begins pretty standard in terms of how well the AI reacts to you, it’s an opening tutorial mission of sorts and one that eases you into the basics. As you progress through a variety of stealth and full assault missions, you catch glimpses of smart AI behavior which can often take you by surprise by not being cheap, but by outsmarting you. I must add, the AI is naturally more of a threat on the game’s 007 difficulty, as it’s here where you’ll need cat like reflexes and a keen eye on what’s going on around you at all times.

QOS uses an interesting cover system, in that most flat surfaces can be hugged. You accuracy increases from these positions and naturally you’re pretty safe from incoming fire. You can pop out and shoot with a fine aim, or you can blind-fire until your hearts content. Although I found this to be a little too easy to sit behind cover and place some very accurate blind-fire shots. The game seems to throw you into these encounters, where your kind of pinned and enter ducking and shooting bouts – going Rambo has little reward for the most part, especially on the tougher difficulties. The whole duck and shoot gameplay is not a new mechanic as we’ve seen similar antics in Gears of War and Rainbow Six Vegas, but for a Bond game and those looking for differences between this and COD 4, the style certainly lends itself well to this fast paced shooter. Although during these ducking moments, the game does change to a third person perspective.

I think what’s interesting to note about QOS, is the fact that Daniel Craig’s James Bond is a very different portrayal of Ian Fleming’s fictitious character. The game reflects this also in that we get to perform plenty of brutal hand to hand moves using a QTE interface (press the corresponding button before the moment runs out). We also see an absence of various gadgets which Bond games are synonymous for. There’s nothing here to distract you from getting your guns out as soon as possible. The only real distractions are bypassing cameras (a simple press of a button), and a simple door hacking mini game.

QOS features a wide variety of weapons such as pistols, SMGs, rifles etc which you can collect from the fallen or find. What’s neat is being able to fit a silencer to most weapons for a more stealthy approach. This actually works well for the levels that don’t have auto detection routines. There’s a real solid feel to the weapons in general, and it’s great to see some impact reactions from enemies when shot.

Going back to the AI, I was pretty impressed with their behavior for the most part. There’s going to be a lot of times when the AI is in cover but leaving themselves exposed for an easy kill. I guess this is to speed up the gunfights a little. However, there is lots of movement, and you’ll notice this right away as the enemy moves from cover to cover to get the best angle on you. I liked how they would flank you and sometime try and get behind on occasion, forcing you to seek the best cover available and being prepared to move if need be. The AI is also good at chucking grenades to flush you out. I found the AI to be quite clever in this regard even though they didn’t throw very many grenades in general.

The graphics are pretty neat and there’s certainly a splash of James Bond colour added to proceedings to spruce things up. The game engine runs very smoothly, and I cannot really find too many faults other than a lack of interactivity with the levels. Simple things like shooting a light and there being no effect makes for a less believable game space.

QOS features some decent likenesses of the characters from the movies, however there’s something unusual in that we never get to see Camile’s face up close and personal other than during one cut-scene in the last mission. My main gripe with the game’s graphics is the animations. Most are terribly poor and lacking frames or something, to make them more believable looking. One good example of a lack of detail is when on the Montenegro train, a scene from Casino Royale movie. You meet leading lady, Vespa for the first time and have a little chat about money. Once the mission begins Vespa is left in the train carriage expressionless and rooted to the chair unable to move or do anything – did the team not want to animate her? It’s this lack of attention to detail that makes the game suffer a little. Another silly moment is during the opening mission where James has to work his way through to the mansion of Mr White. However, the mission begins right outside the mansion yet James can’t scale a small wall to reach his destination, but has to walk the long route to reach a cellar door. There are plenty of locked doors and other things you’d like to interact with but can’t.

The music is perhaps the highlight, and yes if you love the Bond theme, then you’ll have plenty of tunes to tap your foot to and fire your gun off. The music propels the actions and puts you right into the moment as you’d expect. The game voice acting seems to have been ripped from the movies (unless I’m mistaken) and lends itself well to the in game characters and scenes.

QOS features 14 levels, although some features multiple parts and could be considered levels in their own right. The game is very easy and certainly it’s well worth vets starting out on Agent difficulty or above. In light of this, the game can be beaten in an afternoon, much like Halo 3, CoD 4 etc. There’s very little replay value for the single player unless you’re after some additional achievements or finding in game stuff that unlocks nothing. This is a big complaint and although the game has an extensive carbon copy Call of Duty 4 multiplayer mode, as far as I could tell there are no hidden levels, no time attack modes or anything to warrant playing again. This is a big shame and in part a huge factor in the popularity of Rare’s Goldeneye on the N64. Many developers have stepped up to make a bond game that surpasses this classic, but somehow never seem to capture the essence of what made it so good.

The online multiplayer is very solid and if you’ve played COD 4 then you’ll jump in and get stuck in right away without any fuss. There’s plenty of stuff to work towards when playing online matches, and it’s just a shame the same details couldn’t have been added to the single player.

As a single player game, QOS certainly offers a lot of faced paced action in a number of fitting locales for everyone’s favourite secret agent. The combat is basic but very solid with its added and I have to say, optional cover system. The stealth moments work quite well, although are perhaps a little forced. The levels are eventful and have some genuine cinematic moments as you shoot gas canisters and other objects asking to be shot in turn for helping you out against dug in foes or the instant QTE moments in the hand to hand takedowns. There’s really very little to fault here other than perhaps a little lack of imagination in that QOS merely offers a simplistic no nonsense shooter. There are a lot of games out this period, and where lots of games are offering freedom for players, QOS pulls that back and provides a point A to B gameplay, which works in context of this game, but isn’t going to be winning any prizes for it. I would highly recommend the single player game, because it’s a very fun and action packed outing with Bond, however if you’re not interested in Online multiplayer or system link, then perhaps this game is worth the rental only. There’s very little single player wise to keep you coming back for more once you’ve beaten it already.

I think it’s safe to say that QOS surpasses the gameplay of Goldeneye quite considerably especially in terms of level design. However the lack of features such as different mission objectives depending on difficulty, time attack modes for unlocking secrets and more quirks, still leaves Goldeneye leaps and bounds beyond what QOS offers. There’s a very solid game here and with the impressive AI and the basis of a good game here, means that any future Bond games can improve on what’s already been established. This is well worth playing – for an afternoon or two.