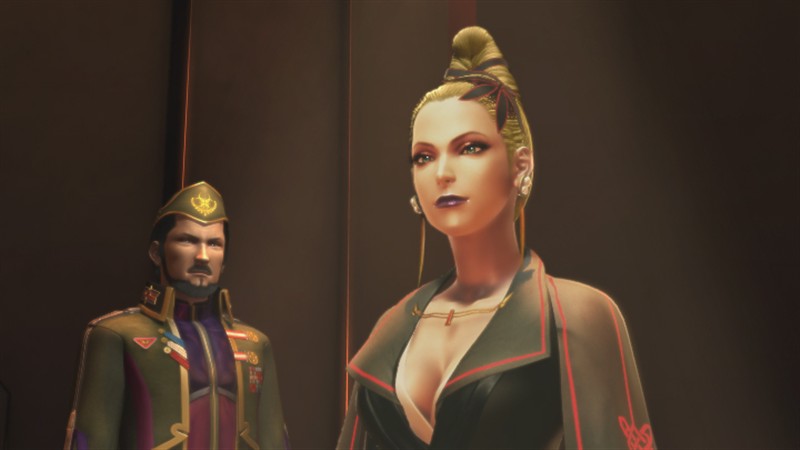 Project Sylpheed is a sci fi space shooter where players assume the role of ace pilot Katana as part of the TCAF. The game is set in a universe where humanity has terraformed planets and made several colonies throughout the galaxy. However troubles are brewing as an impending war with ADON means that the peaceful bliss is soon to come to an end. Piloting craft known as Delta Sabers, with your friends it’s up to you to take to the heavens and fight the good fight.

Project Sylpheed gently eases you into the game by offering some slick pre rendered scenes which introduces us to the game’s characters and their plight. Once you take to the skies in the delta saber control is fairly easy and resembles the antics you will find in pretty much any other aerial based shooter. What Sylpheed mixes up is it’s weapons and their attachment to the Delta Saber. Prior to each mission you are able to select which weapons load out you are going to use. Weapons come in various forms and fit to specific parts of your ship; there are things like machine guns, lasers, rockets, bombs and missiles to name but a few of which with points gained from completing missions allows you to upgrade them.

The Delta Saber also has a few special moves available which are useful for getting out of tight spots and unleashing devastating attacks. By holding the B button whilst moving in a particular direction will perform barrel rolls and even a highly useful 180 degree turn. By holding the Y button you can unleash some special attacks which are useful but not a necessity. In fact I found that I hardly used them throughout the game.

During battle players can switch between their various armaments on the fly and depending on what enemy types you are facing have varying effects. The enemies come in various craft including slow moving bombers, fast moving fighters and loads of large craft such as cruisers and battleships. Fights can be intense and manic with loads of craft flying around the screen, so what is most useful is the lock on feature on some of the weapons. With things like missiles if you hold the left bumper your reticule comes up and begins locking on with any craft within range. Depending on the weapon you can lock on to quite a number of targets before unleashing a huge barrage of missiles which fill the screen with trails and subsequent explosions as they find their mark.

The choice of weapons and the way in which you choose the load out is a neat inclusion rather than offering different craft and provides more attachment to your Delta Saber. You do have to adjust your playing style to suit the weapons you choose but what is nice is that it’s your choice in what weapons you are going to upgrade and choose for each mission.

The missions themselves are all pretty standard fare for an aerial shooter and feature the usual assortment of protect, defend and attack. With 16 missions available with each being made up of several stages means that there’s lots of shooting action to be had.

Project Sylpheed has a distinct anime flavour and this is represented in the game’s graphics. The cut scenes are very well produced and really set the scene prior to and during the missions. The in game graphics are pretty good albeit rather hectic as the screen is filled with ship names, distances and various other parts of the head up display. In general there is a lot going on at any given time with the screen being awash with colour providing a full assault on the senses. I found no issues with slowdown or screen tearing as the game runs smoothly from start to finish.

The sound is pretty good with some decent yet expected performances from the voice over cast. There is a lot of banter during missions and whilst things are exploding all around you it is hard to take it all in especially with the pumping techno soundtrack that plays through most missions. If you like the intensity of fast paced music then no doubt you will have a blast, literally. Other sound effects are as you would expect but as I said its really hard to focus on just one element of the sound due to the hectic nature of the game.

Project Sylpheed isn’t the longest of games and can be completed in under 10 hours. However to unlock all of the achievements and extras in the game will take more than one play through. There are three levels of difficulty to mess around with and if you like aerial shooters then there’s enough replay value here.Sadly the game features no online mode or multiplayer which despite the hectic nature of the game could have added a little more to package.

If you like space shooters then Project Sylpheed is well worth a look however due to it’s brevity and lack of multiplayer makes the game over too quickly. Whilst it lasts it is a roller coaster ride of a game and is totally engaging all the way through yet if you aren’t so keen on this type of game then I doubt that it will win you or any new fans over. Despite having the Square Enix name plastered all over the game, Project Sylpheed is no Final Fantasy and therefore is going to have limited appeal. If you are looking for a game that offers something different from first person shooters then Project Sylpheed will provide some arcade like entertainment. I’d say the game is worth a rental and if you are looking to complete everything the game has to offer then by all means the game is worth buying.