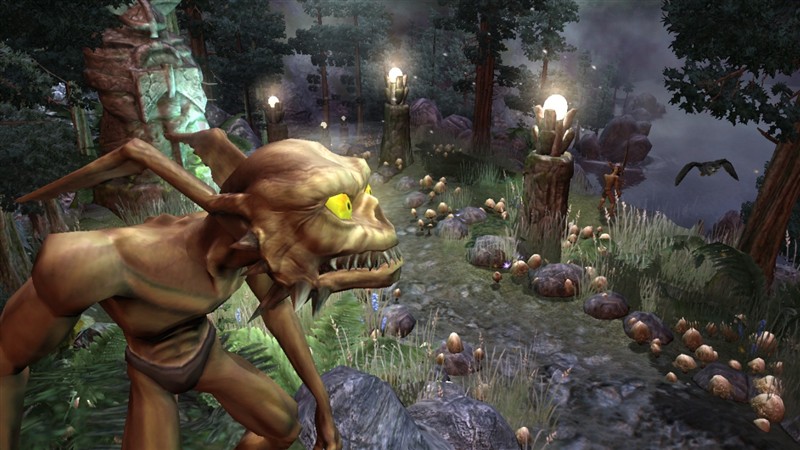 Every once in a while a game comes along that doesn’t fit into the usual categories that we normally use with video games such as racing, shooting, adventure etc. Overlord is one such game and whilst it has more than enough adventuring contained within, it also offers a strategic/management element to proceedings as well. It’s a strange but heady mixture of gaming styles drenched in plenty of black humor that is most certainly on the “British” side of the pond. However with a seemingly straight forward game that appears like your typical third person action adventure are the hidden depths enough to make the game accessible to your average Joe gamer as opposed to those gamers who love their brains being tested ?

In Overlord you play as a dark anti hero who is awakened by minions (goblin/gremlin type creatures) to take back the lands which have become corrupted by the greedy inhabitants. Your job is to primarily act in an evil manner and so throughout the game you will be presented with opportunities to male moral decisions; such as whether to kill the inhabitants of a village or dump your mistress for a more sexy partner. Aided by your loyal minion followers you can use them to attack, pillage and generally cause a nuisance by your command.

Essentially in Overlord you will be running operations from your home or Tower. The Tower is kind of like a visual representation of your progress through the game. From the tower you can teleport to areas visited, make new weapons and upgrade your equipment. there are also some customization options for the tower with more becoming available as you progress through the story. With money pillaged whilst out in the field you can buy all manner of items for your tower including carpets, banners and even evil looking statues.

The Tower is also home to your mistress and captured women who wander around in skimpy outfits for your viewing pleasure. There is also your guide and the resident court jester minion who reels off various phrases related to your success as the overlord. The Tower offers a wide range of rooms to visit and make your own including a handy dungeon where you can practice your fighting arts and harvest life force.

Let’s talk about the minions; these critters come in four colours but during the early stages of the game you will have to hunt down the three others before you can fully utilize the power of having four very different controllable character types at your disposal. You start off with Browns who primarily are your grunts and are formidable melee fighters. Reds are similar but prefer ranged attacks, Greens are stealth based and are great for ambushes. Finally we have Blues who are magical minions who offer a more supportive role.

The game eases you into each of the four minion types use and if you pay attention and or practice in the dungeon then you should easily get to grips with each of their functions. What becomes interesting is once you have all four is finding the best solutions for tackling foes. Whilst it might be easy to send forth Browns all the time, with careful planning and clever use of combinations means that troublesome foes should be easier to take down.

Your minions are grouped related to their colour and they will follow you around the levels. You can order them to wait or control them as a group with the right thumbstick, effectively allowing you to sweep an area for goodies and minion upgrades. Things can get pretty complex but the interface is pretty intuitive and allows you quick access to groups. OK it’s a little fiddly to begin with but after a while it should become second nature.

So with your minions in tow, it’s up to you to venture out of your tower and conquer the lands, take down bosses, solve many puzzles and commit all sorts of evil deeds along the way. Sadly and this is a big issue for me is the lack of a map or any sort of visual cue to point lost adventurers in the right direction. Also due to the pacing of the Overlord means that running around at a snails pace can become frustrating. A map would have helped greatly as the running around looking for what to do next became rather stale. Eventually the right path becomes clear but after needlessly running around searching I do think some gamers are going to be put off by this.

Graphically Overlord looks pretty decent although not mind blowing. There’s a distinct art style to the game and this works well. The depiction of swamps, villages, towns and other settlements is handled well and the whole game has a feel very similar to Lionhead’s Fable. The character models could have been a little more detailed but I think they work well enough alongside the cartoon like art style. I didn’t encounter any issues whilst playing and that’s with plenty of characters on screen at any one time so this is a good thing.

The sound is of a high standard and whilst a lot of the voices overs are gremlin like grating voices you can tell the guys had fun recording the speech for the game. The other characters in the game are reasonably well acted although you will be hearing repeated phrases over and over again from the townsfolk. From minion chatter to clashing sound effects the sound works well in the game and will no doubt bring a few smiles along the way “Man Mangler”, “Gluttonous Overlard”.

Overlord isn’t a quick game especially with the lack of map and the slow running speed of the lead character. That aside, there is plenty to do and if you stray off the beaten path there are many treasures to be had. The game is going to last in excess of 15 hours on a first play-through but if you are looking to unlock all of the achievements then more plays are required and thus increase the length of the game. There’s also some multiplayer modes thrown in for good measure where you can go head to head or co-op; again adding to the longevity of the title. I Think there’s enough here to make the game good value for money all round.

Overlord is a very different game and with it’s strategic and management qualities makes a refreshing change to the shooters and racing games we get so often on consoles. However, I think it’s worth noting that, Overlord isn’t going to appeal to everyone, especially those gamers who like instant gratification in their games. The whole pacing seems very slow and it will take some time to start getting the full benefit of the game (if you stick with it). Overlord is definitely one of those games which you should try renting first to see if it’s up your street, although there is a decent marketplace demo available for you to try before you decide. It gives a good indication as to the basics of the game.

If you like adventuring, dark humor, acting evil and being in control then Overlord is well worth a look especially if you enjoy exercising the old grey matter. However if you are more action orientated gamer then Overlord might not be for you and so as I mentioned a rental is probably your best bet.