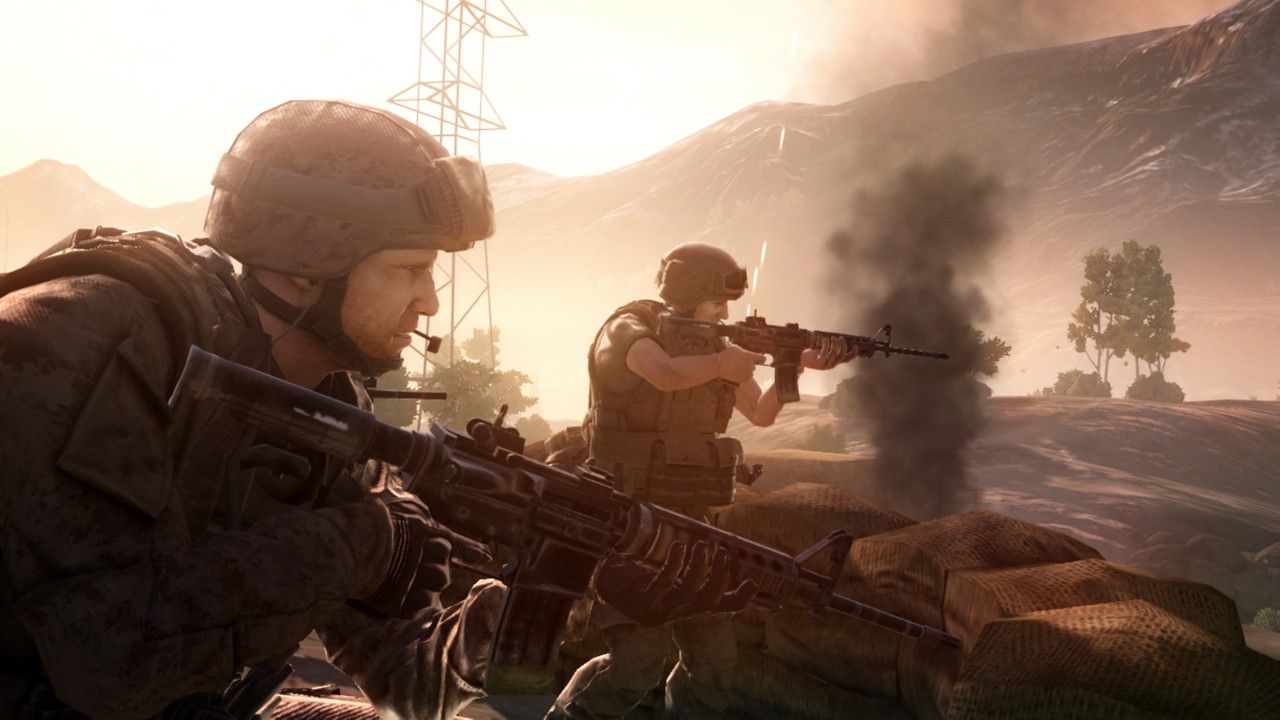 Operation Flashpoint Red River takes you into the real world locale of the Tajikistan heartland, fighting a war against organised insurgents, an invading Chinese army and a full frontal assault on your ears as they lie wasted, battered and ever so bruised following the barrage by your waxing lyrical commanding officers. No, not the enemy’s, but the Ricky tick ones supposedly on your side. You play as a marine and it’s your job to fight the good fight in what should be a pretty decent slice of semi- realistic modern day warfare. Not quite.

Since its forebear performed not quite as expected and the gameplay was hindered by some issues, it was perhaps a forgone conclusion that Codemasters’ internal development studio working on the next game would have to shift focus away from the somewhat limited appeal of the sim like approach the series in known for and opt for a more accessible experience. With Red River now available in stores and having spent a fair bit of time completing the campaign and playing online, is this the definitive Operation Flashpoint game, or does it suffer from a lack of ingenuity, dampening what could have been a stellar tactical experience?

The gameplay remains mostly unchanged from Flashpoint 2 Dragon Rising, although you’ll probably notice a bit more fluidity of movement, an increase in pace, and a slightly tweaked user interface. Whilst still offering some tense moments to tackle, there’s a real sense that a more inclusive experience is laid on a platter for newcomers coming in from other franchises. For example, you’re able to pretty much take the lead for the majority of the campaign and have AI team mates hang back a little whilst you do the majority of the work. On the lower difficulty settings this is a legitimate tactic, and you’ll find that having some tight controls over your three AI team members is not something you ever really need to dip into. However, for those of you looking to take a commanding role in the various scenarios thrown at you, then the option to bring up the map view and start issuing orders is very much an added bonus. The Flashpoint games have always been about a semi-realistic slant, and with the various options available to you does feel like there’s a bit more detail on offer than in other similar themed outings. Compared to Dragon Rising though and it’s clear a lot has been dumbed down or removed entirely, lending the experience to a more simplistic approach.

So, with some smooth and satisfying combat and a fair bit of pace, the game throws up various missions for our intrepid and non questioning quadruplet of marines. There’s some neat touches with the overall presentation in that you’re rarely thrown into the thick of battle and have to reach the points of conflict, via vehicles or on foot – adding a tense yet uneventful aspect to the missions. It’s possibly a realistic angle and certainly makes the first spotting of an enemy more impacting, yet at the same time it’s easy to see that the impatient might get a little disheartened if you’re spending a lot of time running about doing nothing other than exercising your military trained legs.

The skirmishes themselves are always full-on affairs, and with your fireteam offering audio cues as to where the enemies are holed up, does provide a real sense of engagement. However, one criticism that has to be mentioned beyond some very poor AI routines at times, is the nature of the skirmishes all following a very similar pattern. You’ll often find that alongside other fireteams there will be moments where the odds are against you, and you’ll be overrun by the enemy where your job is to defend or assault, killing drone after drone in an almost turkey shoot fashion. By mission 10 you’ll possibly be craving for a bit more diversity which you’ll sadly never find. Perhaps this is an exaggeration, but it does feel like a bit more imagination could have been used with the mission structure.

There’s some neat ideas thrown into how you can develop your character and comrades whereby you’re able to spend points on various skill enhancements, unlock better gear for each of the character classes, and generally choose the load-outs of each team mate resulting in slightly tailored approaches to the shooting galleries. For example, you could make everyone a sniper, or enter missions all special forces like with silenced weaponry only, it’s good, but the stickler is you’ll have to start at the basic level 1 for each class as any experience earned in one class does not carry through to other classes.

Red River offers some stunning vistas, decent character models and a much more modern feeling game engine. The glare from the sun makes its mark through the trees and distant explosions are a joy to behold, and when things are dark you’ll get a real sense of illumination when switching on the night vision goggles. There’s still a bit of roughness to the game’s looks, but when presented with such wide open areas and glorious effects then it’s understandable why. In terms of expanse, Red River is ambitious, and in some ways, you’re able to plot your own routes to objectives if you like, giving the player a greater sense of control, which is something a bit more immersive compared to games which offer Hollywood style set piece, after set piece along linear routes.

The frame rate seems to hold up well, but as mentioned it’s the AI that really lets things down as they continually cross your line of fine, don’t do as they are told and will not care if enemies are shooting at you before attempting any medical actions. Also, whoever designed the vehicle controls needs to be shot, as they are not big, or clever, and make driving anywhere a complete chore due to the severely poor handling and ill-conceived camera control.

The audio is actually the game’s biggest strength and most damning weakness all rolled into one. On the one hand you have some excellent audio cues from your fireteam as they call out targets and give assessments on the state of play during the numerous skirmishes amidst cool gunfire that sounds solid and some supporting chatter to keep things tight. On the other, your ears are battered by the constant drivel that comes out of your commanding officer’s mouth, which is pretty much through the entire campaign. The guy simply metaphors his way through every bit of dialogue, uses unnecessarily foul language that is not only totally stereotypical, but kills the authentic feel the game has going for it. Like the programmers who developed the vehicle handling, the script writers need to be lined up and put out of their misery or just fired – that’s metaphorically speaking of course.

The campaign which can be played solo or co-op with up to three others is lengthy enough (featuring some decent sized missions), and with the levelling up of your characters within their base roles as an incentive, means you could spend a lot of time playing the missions and doing them again and again to improve your score against the online leaderboards – and gaining some satisfaction from improving your individual stats. There’s a random flavour, and if you get tired of the same mission parameters there are a number of Fire Team Engagement missions on offer as well. These are a bit more interesting and have you protecting a convoy, defending against waves of enemies, clearing out insurgents, rescuing pilots, and generally dropping in and out of games that can be completed fairly quickly with little thought. It’s great that these are not limited to online play and can be completed with AI team-mates offline. Sadly, there are few maps and it’s a shame those that are available are regimentally locked to their specific missions rather than being open across all modes. For the record, it has to be noted that Red River features no player versus player online competitive modes of play, so if you’re looking for that kind of fix, you’ll need to look elsewhere.

Red River offers some fine gaming moments for fans of tactical shooters, and if you’re the sort that likes to experiment with all the detailed options available to you, you’ll find some enjoyment ordering your team around the battlefields with some success (when you do things right); such as flanking, changing formations, equipping the right weapons for the task and on occasion splitting the team to perform advanced manoeuvres. If you’re after a twitch shooter, then you’ll find what’s on offer is perhaps not so much catered to you, but will provide some enjoyment if you can adjust to the (in comparison to less realistic offerings) slow pace. The game does play much better when there are four human players using mics and who are equally disgusted by the prominent offensive language. It’s in these moments that Gameplay is tight, engaging and well worth the entrance fee for an unrivalled experience this generation.