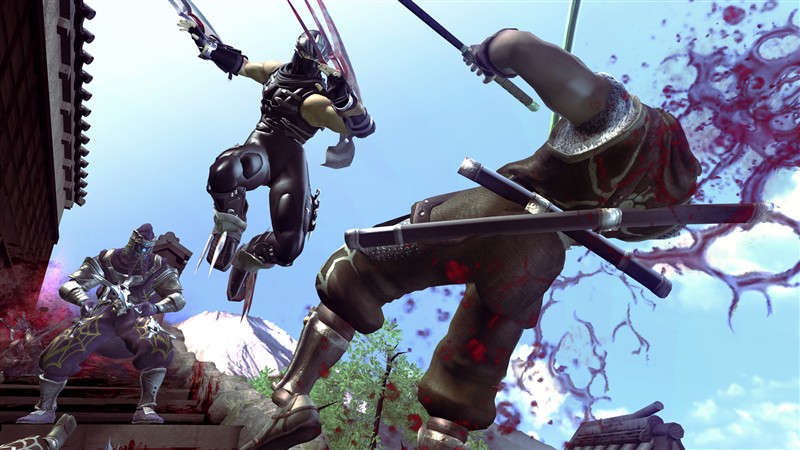 Ninja Gaiden was one of the best action games on Xbox, and cemented the developers, Team Ninja as an outfit who not only could capture our imaginations with the lovely and buxom Dead or Alive girls, but also provide us with some serious gaming moments. For the casual player, Ninja Gaiden and its subsequent updated version, Ninja Gaiden Black proved to be a tad difficult, thus making it a game for the more serious gamers. Its been a while since Ninja Gaiden Black and action hungry gamers have been dying to get their hands on another slice of Ryu Hayabusa’s adventures. Well, the wait is over, as Team Ninja has finally finished Ninja Gaiden 2, which hit stores on Friday 6th of June 2008. Has the wait been worth it, and has Team Ninja created a more accessible game for casual gamers?

Ninja Gaiden 2 is a third person action game, where you take control of super Ninja Ryu Hayabusa (who also appears as a character in the Dead or Alive series). Ryu is last of the Dragon Ninja linage and is sworn to protect its secrets. From the offset, you’re introduced to the not too in depth story, which is basically an excuse to start cutting enemies into neat little chunks. Ninja Gaiden 2 is pretty much identical in its set up to the previous games, in that you have to move around constantly to avoid incoming attacks, make good use of the block button and generally perform stylish combos using two attack buttons. You are also able to use magic attacks (Nimpo) and projectiles of various sorts. Throughout play and as the story progresses, if you look around hard enough you’ll find additional melee and projectile weapons for Ryu to equip and use at leisure. A handy quick select menu is one of the new additions to the series, which allows you to change weapons, magic and items without going into the item screen. The game still pauses when selected but it’s a lot easier to manage your inventory – don’t ask me why, it just feels like it during the heat of battle.

The game’s melee weapons are mostly all bladed with the exception of the Tonfa battons, Sadly the numchacas are absent this time, but you’ll get to mess around with the Lunar Staff, Vigorian Flails, Scythe, Dual Katanas, Kusarai, Claws and of course Ryu’s standard Dragon Blade. Each weapon has an impressive set of moves (you can view a list in the menu) to unleash onto your opponents, and whilst it’s easy to spam simple moves with the X and Y button, it does pay dividends to learn a few more complex moves.

Combat is very similar to the previous games, although there are some improvements which are more on the subtle side. Other than a more visceral damage system, you’ll have enemies that are mortally wounded try and take you down with them by using a final death move. Luckily Ryu can now counter throw attacks and with the new Obliteration techniques can cause massive damage to enemies on their last legs. The AI is still pretty intelligent, but will also change depending on how much damage they have taken. If an enemy loses a limb for example, then it will change its attack pattern.

The essence (orbs) collecting makes a return and is the mainstay for keeping Ryu alive and for gaining points to boast about, or purchase items from the store. In fact, the store seems a little bare this time round, as none of the armlets from the previous games are present. I guess this allows gamers to focus on combat using an even field, considering the inclusion of leader boards.

The game still rewards players who can collect high amounts of essence through skillful combat techniques – something new players aren’t going to understand fully without practice. The Ultimate Techniques return, and with careful timing, and skill you’ll be able to score highly. Considering you are able to upload you score for each level to an online leader-board means that you’ve got something else to work towards other than mere game/level completion.

Ninja Gaiden 2 opts for a more linear approach this time, which means there is no back tracking as such, and a pretty clear pathway to your next encounter; although there are some vague moments that might have you scratching your head for a moment or two (watch out in Chapter 5). The way the game is set up, you explore a little and en route to your objective for a level, you take on enemies in steps. You can try and out run them, but this misses the point. There is a real satisfaction gained from each encounter with the standard enemies, because you can hone your skills, yet at the same time be suitably challenged. You’re mostly always, very close to death when surrounded by the more tougher enemies in the game. This edge of your seat play, is very thrilling, although can be frustrating at times. Only real masters – or those who play on the lowest difficulty can take on the hoards with utmost confidence, and perhaps show off a little. Ninja Gaiden 2 adds a new health and save system to proceedings to take some of the frustration out of dying and having to restart far away from where you died previously. There’s more save points scattered around, and what’s more you are able to replenish to full health once when you use them. Another addition is the fact that Ryu’s health bar takes regular damage which replenishes once there are no enemies in close proximity or if you collect Blue Essence. His health also takes permanent damage which does not replenish once the coast is clear, and so to heal this you have to use health restoration items, or carefully harvest Blue Essence. These features certainly make the game far more easier for newcomers.

The bosses make a welcome return and show up in every level to hinder your progress, and hinder they certainly do. I managed to die a lot of times trying to beat a boss in Chapter 3, until I worked out a decent strategy for success. It’s this kind of learning process that makes victory all the more satisfying. The boss encounters in general, did feel a little repetitive, as some were a little on the easy side comparatively to the previous games, and required similar strategies for victory. That said, the ones that are very tough, kept me on my toes for sure. Luckily Ryu can dart around the screen with relative ease. This brings me onto my main beef with the game, and a beef which you’re forced to get used to or die.

The camera has been an issue in the previous games, and is operated manually. You can pan the camera around using the right thumbstick, but the camera does not automatically center behind you. This can cause problems when you are darting around the screen and will often result in you not being able to see your enemies properly. The game allows you to manually center the camera behind you pressing the right trigger, but during frantic combat moments, this is an added pain. You can get used to it, but it just feels that some sort of auto pan feature would have helped. With the action so fast paced, it’s a bit much to be required to wrestle with the camera as well as the enemies; this being something that should have been tweaked from precious games because it’s the same.

The graphics are a mixed bag in Ninja Gaiden 2, there are some moments where you’ll be amazed at how lush and fluid the locales look, such as the rendition of Times Square in chapter 3; as well as some very neat character animations. However, there are some textures that look very poor if you pay attention to them. There’s some really great art direction in Ninja Gaiden 2, with some impressive areas to fight in, although there’s still a number of environment cliches, such as a sewer system to navigate.

The enemies themselves are well designed and look as horrific as you would expect demons (fiends) to look like. The real star in terms of the look of the game, is in the over the top and somewhat realistic dismemberment. Your weapons truly feel as sharp as they look, and it’s simply amazing to slice off limbs or heads or both, from human and the not so human adversaries. There’s lots of gore on offer, and I think in this game it pulls it off really well as it never gets old.

On an negative side, there are some graphical hiccups where enemies will get stuck on the scenery and the age old invisible walls blocking what looks like a route you could navigate. The biggest problem I encountered other than some screen tearing in places, was the slow down in frame rate during some of the more intense moments. A section on a stair case in Chapter 10 being the most prominent case of slow down, although I admit it added an almost bullet time effect to the battle which looked rather cool. In general, the negatives are outweighed by the positives here and don’t really affect gameplay too often.

There’s not really much to say about the sound, other than you’ll hear some suitable action music through the levels, and reasonable voice performances for the leading characters during the few cut scenes. The sound of swords slicing and dicing is as you would expect as is the clash of metal against metal. Ryu makes suitable groans and grunts during combat as do his adversaries and it all gels together nicely to put you into the game.

Ninja Gaiden 2 offers a reasonable length single player experience only, although as mentioned you can upload your high scores to a leader-board. You are also able to record gameplay clips and upload those for others to view as well. The real longevity comes from trying your hand at the tougher difficulty settings which not only ups the ante quite considerably, but include different enemies to take on. There’s a real step up in difficulty once you go from normal to hard and with an even tougher difficulty to unlock beyond that, you could spend ages honing your skills to beat the game entirely. For me it’s one game that does not need a multiplayer added to it.

Ninja Gaiden 2 is a lot more accessible than its predecessors, although is still going to be a little too hard and vague in places for newcomers. The new easy difficulty is most certainly a welcome addition, because more experienced players can feel like god and treat it as a practice mode, and newer players will not die as often and get pad throwing levels of frustration. In my experience of playing, there’s a distinct classy quality here, yet this is somewhat marred by some cheap moments and of course the non dynamic camera which hasn’t evolved from previous games. That said, if you are looking for an action game that is fast paced and hugely rewarding to play, then look no further as Ninja Gaiden 2 certainly delivers a well rounded package. Ninja Gaiden 2 has improved from its predecessors and is a welcome addition to the Xbox 360 library of games. The challenge factor and feeling of jubilation upon victory is second to none, although be prepared to die a lot and be prepared to remain calm in the face of adversity as the action never lets up.