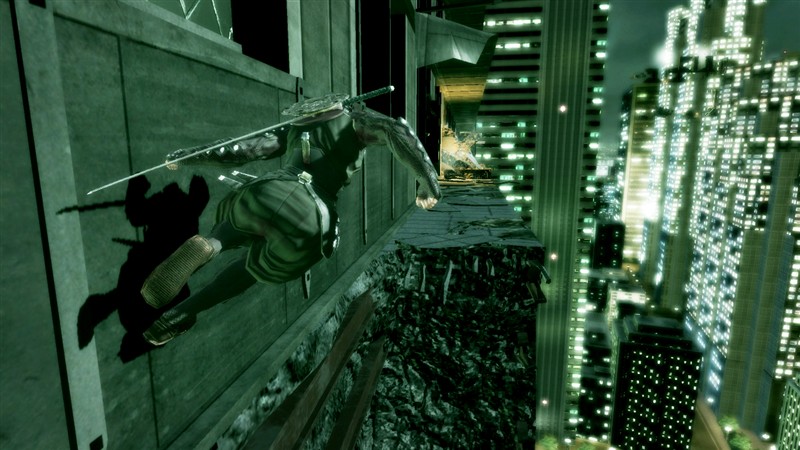 Ninjas have featured in a wide variety of games to date across multiple platforms and it’s clear to see why. There’s something most positively alluring about men wearing dark clothing, leaping about the place with sharp swords and pointy throwing objects. Add a touch of smoke and some severed limbs into the eclectic mix and you’ve got yourself perfect fodder for a video game action hero. Ninja Blade is the latest game which features a leading ninja character and with all the ‘ninja-esque’ boxes well and truly ticked, offers an action game that has an abundance of slicing swords, death defying moves and some rather over the top boss enemies to defeat. With ninjas still being cool regardless of how many games feature them, how well does From Software’s Ninja Blade hold up? Thanks to importing the Asian version which supports English language, I got my hands well and truly dirty with the game’s non stop action. Do I feel all ninja as a result?

Ninja Blade offers a pretty simple approach to tackling the trials and tribulations of being a ninja. There’s no real training involved here as you assume the role of Ken, who starts the game as part of a well seasoned clan of assassins. Alongside friends and family, the clan embark on a new threat to civilization in the form of a spreading infection caused by parasitic beings. The story is decent enough to draw you in, but ultimately is cliche and can be largely ignored without the player losing too much essence of what’s happening.

The game’s opening mission lays it on you, presenting a level which is linear and pretty much the basis for the rest of the game. Navigate from A to B, kill some enemies, face and defeat sub-boss, kill some more enemies, face and demolish the final level boss. It’s a simplistic formula that appears in many games, and in this case works rather well. There’s not too much fussing around as the focus rests entirely on combat and some minor navigation. Puzzles and menus seem to be hiding in the shadows, too scared to grace us with their presence here, which is not only refreshing, but means gamers can simply get stuck in to the action right away.

Ken is armed with three main weapons which offer slightly different attack abilities. The Ninja Blade is the standard all purpose sword that any self-respecting ninja has at his side. The Stonerender sword offers the chance to smash through the more well armored enemies, but is more slow to swing. The Twin Falcon Knives are the opposite and offer extremely fast slicing attack moves. With a press on the D-Pad you’re able to switch weapon on the fly and mid combo, which is rather neat as it keeps the flow of the action smooth. Ken is also equipped with a windmill shruken that offers three different forms of attack, these include wind, fire and electricity elements and can be used to dramatic effect against enemies that are weak to those specifics.

As with a number of action games of this nature, you’ll collect orbs from defeated foes, which in turn accumulate and can be spent on upgrading the weapons. Upgrading allows for even more attack moves being added to Ken’s repertoire. There are not hundreds of moves available, but enough to keep button mashers happy and some that are a little more intricate to perform in conjunction with other moves and weapons switching. To be honest, gamers who would rather not sit and learn complex moves will be quite capable of simply hammering away at the two main attack buttons with relative success. The enemy AI seems to be somewhat basic, and thus allows players to be as flamboyant or methodical as they choose.

One of the main features of Ninja Blade are the QTE moments, which appear quite often. In fact the game is so laden in these that you’ll be spending a lot of time poised and ready to tap the correct button or stick inputs during the more cinematic scenes. These essentially are interactive cut scenes that are extremely over the top, but also gratifying to watch/play. Mess up an input, and the game rewinds time, allowing you to try the sequence again – although on occasion the button inputs will change to stop you from memorizing the sequences. To add a little more interaction to these moments, the game grades your timing with a score, with a ‘Perfect’ being awarded for those with ninja like reflexes, and a mere ‘Good’ for those less cat like inputs. The QTEs certainly correspond well with the on-screen action and are always pretty fitting rather than just random buttons you have to press.

Between each of the 9 missions you’ll be able to see how well you scored (and upload your score to an online leader-board) and see if you’ve made an improvement to your personal high score, if replaying a completed level again. Like all games of this nature, you’re able to do so to farm for more orbs, thus giving you a greater chance against some of the more difficult bosses, although that said, on default setting the game is rather easy.

Ninja Blade has its fair share of hidden items, which means gamers should be well-versed in smashing open various crates and barrels for goodies. What’s really neat is the option to change Ken’s outfit when you acquire more threads. The outfits on offer all use the same basic template, but the designs on each are quite varied. You’re able to then mix and match parts and change the base colours to create a macabre character or one that is beautifully crafted – in a twisted way. I made a black and white striped Ken, who looked more like a zebra than a ninja warrior, but he still looked very cool during the game’s cinematics. You could have some great fun experimenting here despite the fact that the customization isn’t particularly deep. It’s a neat inclusion all the same and certainly adds a personal flavour to the character.

Ninja Blade looks pretty decent, showcasing a distinct quality and impressive sense of scale, especially when tackling the game’s bosses. The levels are pretty linear but range from city rooftops to more subterranean locales. They are varied enough to keep things interesting and offer perfect battle grounds for maiming the opposition. As already mentioned, there’s the element of interaction when smashing inanimate objects that aids in minor exploration, and the game’s regular deformed enemies are always on hand to be sliced into oblivion. The enemy design is of a high standard and seems to offer demonic versions of common creatures such as slugs, snails and puppy dogs tails. Actually, forget puppy dogs tails and just go for massive versions of insects and invertebrates you’ll find in the back garden. Ever wanted revenge on slugs that have devoured your prize plants? Well now you can exact your vengeance with a ninja like quality – something your neighbours would frown on should you adopt similar tactics in your back gardens.

The game offers a smooth playing experience with only some minor moments of screen tearing rearing its head from time to time. The animation is good, sword play is solid and the cinematic direction is of a high standard. However, some camera angles can be problematic at times especially when performing wall runs moves.

The music is pretty standard fare featuring fast tempo tunes during the action (which is the majority of the game). The voice acting is more on the reasonable side rather than being described as amazing. The actors get the job done and despite being somewhat ‘wooden’ on occasion, convey the plot as best they can. There’s an option to mix up the voices for a more authentic sounding game, but with this means you’ll have to avert your gaze to the subtitles rather than focusing entirely on the scenes. The sound effects are as you would expect and means that every sword clash and slice sound jumps into your ears with familiarity.

The game offers nine missions which can take up to an hour to complete for each one. If you’re hunting for hidden items then this naturally will make the levels feel more drawn out. Due to the game’s linearity, you’ll rarely be left wondering where to go or what to do next, so it’s pretty much non-stop all the way through. There are difficulty settings to tinker with as you would expect, and with the hidden stuff to locate as well, means that you’re encouraged to replay levels as you see fit. The game features no multiplayer, but as already mentioned, you are able to upload your scores to an online leader-board to see how well you fared against your peers.

I have enjoyed playing Ninja Blade as it offers a no-nonsense take on being a ninja. The story is forgettable as are the characters, but what really shines are the over the top and well integrated QTE moments. I think some gamers might feel there are a little too many of them, but once you get over it and accept that they are just as important as swinging your swords manually, then you should be able to appreciate them more. There are some very cool scenes to watch and interact with, and with the option to tweak your ninja’s appearance, adds another layer to what is essentially a very basic hack and slash game. Some minor shooting moments help to break up the repetition, but overall the game allows players the chance to live out their ninja like fantasies without having to break too much of a sweat – that’s reserved for the other ninja game on Xbox 360. In fact I’m going to name drop here, and say I would liken Ninja Blade to Ninja Gaiden’s promiscuous and overly easy sister. Interpret that how you want.

In closing, Ninja Blade offers a welcome slice of action gaming that is not only simple, but effective at the same time. Some classy movie like cinematic direction, over the top enemies and cheesy characters, help pigeon hole the experience just above mediocrity. If you’re after an action game, like ninjas and have a thing for garden pests, then Ninja Blade has it in spades.