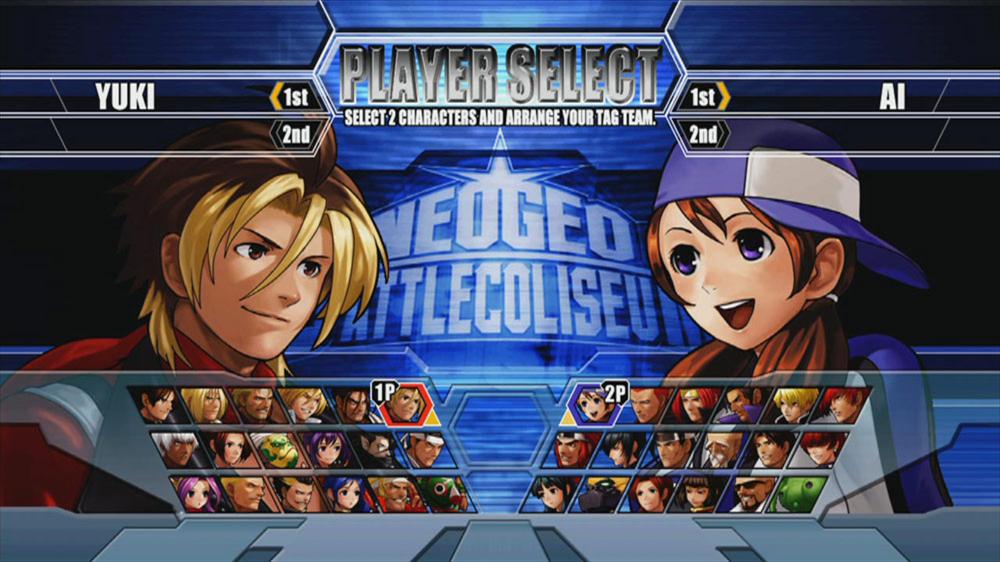 Neo Geo Battle Coliseum (NGBC) released in the arcade in 2005 and some years later we now see the digital version hitting the XBLA. With a number of fighters arriving on the arcade, how well does this relatively new game fair considering the Neo Geo games and their series’ have been less popular in the West compared to their Namco and Capcom counterparts.

The game boasts a wide assortment of characters spanning years of the Neo Geo console’s past with game characters from Samurai Showdown, King of Fighters and Final Fight, to name but a few. There are 36+ guys and gals (and alien) to choose from and with a Story, Survival, Practice, Versus and Xbox Live modes of play to sink your teeth into, there’s something for everyone. The gameplay is actually very easy to get into, and if you’re a fan of the more popular StreetFighter series, then getting into grips with any of the characters on offer here will be a breeze. In fact, if you’re a newcomer then the relative ease of play and not so difficult opponents make for a welcoming fighter.

You chose two characters in a tag team and then battle it out against other teams in succession, this is for both the Survival and story modes. What is rather neat is being able to tag your secondary character at any time during matches, and even unleash some team based attacks amongst the usual assortment of special and super moves.

The real onus on this game in particular seems to be thrust towards the Neo Geo fan, because for the most part, the characters will be pretty alien to a lot of gamers who simply won’t even have heard of a Neo Geo console. However, with such a huge roster at your fingertips and the fact that picking any one will be easy to work out a few moves, the game is very playable. Until you perhaps reach the end boss who simply reminds you that the AI can be tough too. Luckily there’s a handy continue service feature which lets you choose options to improve your chances – not used by purists, but very neat for those who’d rather not face the last boss 50 times.

The game looks a little dated, with fussy, less detailed hand drawn 2D characters. Compared to games like Blazblue, the characters could have been more detailed, although it is possible the developers have retained the old school Neo Geo look on purpose. With 3D moving backgrounds and some fluid, flamboyant animations, the game’s graphics remain colourful and well suited to the game type.

The sound is pretty much expected for a fighting game. You’ve got the usual hit effects, the odd bit of speech, and music to intensify the combat and menus. Nothing more can really be said in this area as it does what it says on the tin.

With a Story to wade through with the various characters, although ‘story’ is perhaps used in the loosest sense, Survival and local/online versus there’s enough to keep you entertained. The sheer number of teams you can create, alongside countless colour edits, makes this a bit of a dream game for Neo Geo fans. As a game to dip in and out of and perhaps compare yourself to others via the online leader boards is quite accessible. Naturally if you wish to go beyond that, then finding like-minded fighters across the globe with the online mode is where it’s at. Usual rules apply, play someone in your own country for best results and get some friends to buy the game as you might be hard pushed to find fellow opponents.

NGBC is a worthy title to bring to the XBLA, but its niche appeal might mean you’re going to miss out on some of the game’s features. As a single player experience, there’s enough to keep you occupied, but in fairness, the game is better suited for local multiplayer for obvious reasons. With lots of colourful characters on offer, fast and fluid animations, and a very pick up and play mentality, if you’re a fighting game fanatic then this is worth checking out. If you’re new or never heard of Neo Geo before, and are still in love with the many other fighting games on offer at the moment, then perhaps you won’t be missing anything here. For fans of Neo Geo games, this is a whet dream come true and well worth it.