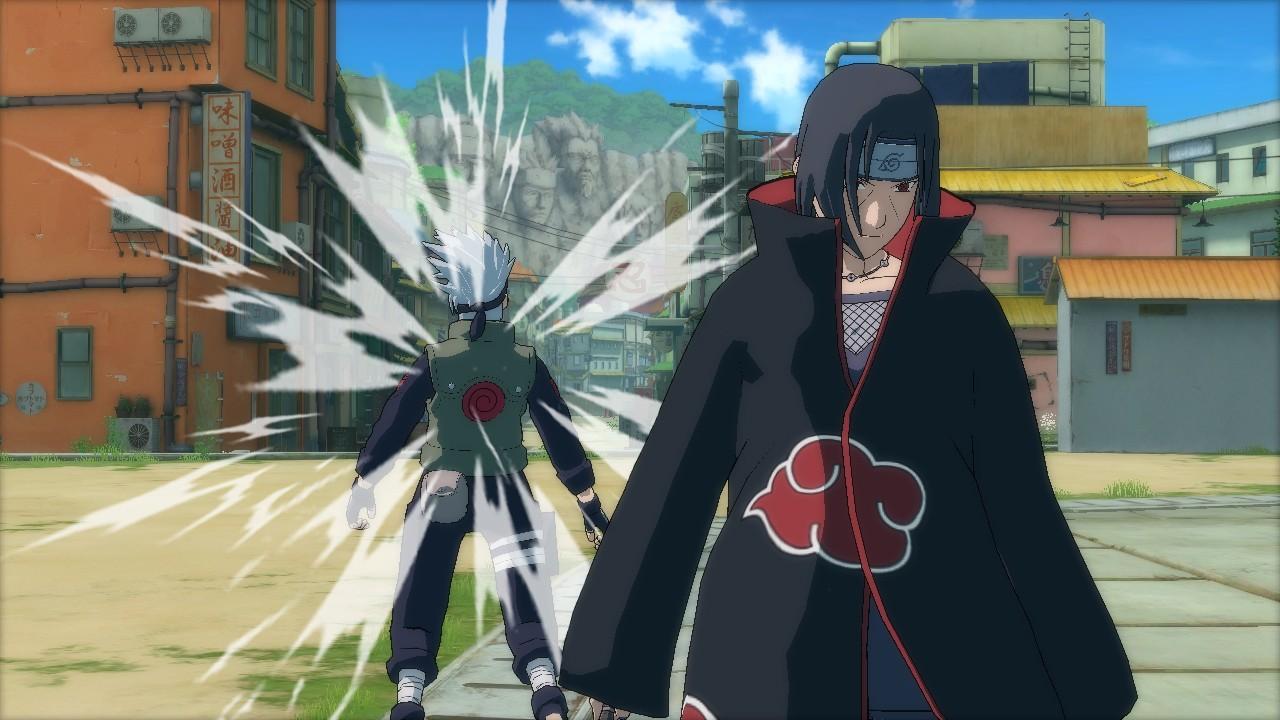 Having played all of the previous Naruto games, watched the first season of the anime and enjoyed the tale of one feisty spiky haired loud mouthed ninja in the making, it came as a pleasure to get to grips with Naruto’s latest game in the long winded title – Naruto Shippuden Ultimate Ninja Storm Generations. Now, I could abbreviate that to NSUNSG but that would be a bit silly, so instead for the remainder of this review will simply refer to the game as Generations. Right, with that out of the way, the game.

Generations on a basic level is a 3D fighting game that instead of offering a fixed perspective allows for full 3D movement. There’s good cause for this approach because in keeping with the style of the anime, there’s a lot of movement from the main cast of ninjas, where a static side-on approach simply wouldn’t work, or do the characters any justice. Whilst previous Naruto games have offered similar combat elements amidst a story, platforming and role playing adventure elements, Generations focuses primarily on the fighting. It’s a fighting game through and through, and makes no bones about it.

Upon booting up the game there are several modes of play to sink your teeth into, and if you’re a bit of a fan or want to start unlocking the many hidden characters from the impressive roster of 70 characters then the “story mode” is where it’s at. Here you’re presented with the original beginnings of season 1 Naruto, then moving on to Season 2 and main rival Sasuke. The stories feature clips and still images from the anime accompanied by original voice overs and narration. Whilst not overly long, they do fill in enough details for those who have watched the anime. Sadly if you’re not up to speed on Naruro lore, then whilst still enjoyable, loses some of its appeal. Once you’ve viewed cut scenes, you’re then fighting in various scenarios usually with your opponent having an advantage such as increased attack power. There are a number of fight scenes per story, allowing you to meet the majority of the cast and fight them. Once the three basic stories are beaten, more open up, but I won’t spoil the details as to whose stories you follow here.

From the main menu, another option is “free battle” which allows you to play locally versus the AI or versus another human opponent, although there’s far more here for the single player as well because not only can you engage in simple fights but also enter tournaments and survival modes. There’s quite a lot to do here , and with the option to team up with a friend and just fight in tournaments or versus is a big plus.

Generations features a comprehensive system of earning money or Ryo as it’s called. Each fight nets you more and the better you perform (determined by a ranking) the more you’ll receive. Ryo can then be spent on a number of collectible items such as artwork, ninja tools – items which can aid you in fights such as offering increased attack power or smoke bombs etc. What’s perhaps the most intriguing aspect of the collection is being able to purchase Ninja Info cards which can be unlocked through play and then purchased. The cards add abilities to your fighter which come into play when playing online versus others. You’re able to trade cards and collect new ones, and what’s really neat is they correspond with real cards that can be purchased at participating stores. Each card has a code which can then be entered into the game adding a lot more to the simple act of collecting stuff in-game.

The online component offers the standard fare of ranked and unranked matches and various match types allowing for a multitude of playing arenas for the serious gamer and those just looking to have a bit of fun within Naruto’s world. With such a diverse range of characters on offer, those cards and their abilities and you’ve got matches that can either be over in moments through use of tactical deployment of ultimates, or those which are a bit more ranged and revolve around dashing around the open arenas trying to out think your opponent. No matter what your preferences, it appears there are characters to suit what ever ranges you wish to adopt and online is such a place where these can be tested.

Generation’s solo gameplay is pretty simplified as you’ve essentially got one attack button at your disposal, although don’t be fooled as there are some tactical elements to fighting. There’s a unique counter system that’s limited by a meter which prevents constant countering. There’s the chakra charging which aids in unleashing special moves and ultimate jutsu powers which fill the screen with massive attacks and often huge beasts. Throws and of course dodging play an important part of the gameplay mix. In the story mode at least, the advantages of the AI are a little unfair at times – plus 90 attack power anyone – but with careful play and learning are not too hard to best. There’s very much suitable challenge on offer despite what is essentially quite a simple designed game. My only gripe would be with the troubles you get into when opponents catch you in a combo and you’ve used all your countering. This results in a perfect excuse for the AI to simply rain down a ton of attacks on your character with no remorse and no means of escape.

Generations is a grand looking game which sticks true to the subject material as characters look the part and equally animate just as well. There are plenty of locations from the anime, and with full 3D play spaces make for some highly cinematic battling moments – especially when powerful awakening moves are triggered or those over the top Ultimates are used. The overall presentation is of a high standard and works very well indeed in context of the anime roots of the series.

The game’s audio is also key to its success and as it features original English and Japanese voice overs, means players are spoilt for choice. With mellow and engaging music on offer as well, and you’ve got a very authentic game indeed. Naturally, if you’re not familiar with the anime series then you’ll probably agree that there’s an abundance of cheese on offer in the min performances, but this is really all part of the charm especially as Naruto is actually voiced by a woman.

You can sink many hours into this game and still have a lot to do, and that’s before you take the fight into online spaces. With loads of collectibles and the interesting stories to relive, Generation’s isn’t short on content which is a great thing for solo players. If you’re a fan of fighting games then Generations is very much well worth checking out, however, I feel that something is perhaps going to be lost on those gamers not familiar with the anime. I mean, even I felt the vagueness of the second series could have presented a bit more of the story, but as the game already boasts some 60 minutes of footage and original footage from studio Pierrot, one can’t complain too much.

Generations is very much a game for fans of the series and when all is said and done, there’s a great game here for them even if they’ve exhausted Ultimate Ninja Storm 2. The abundance of fine characters, some very cool execution, and a simplistic play style that’s easy to grasp makes for a game which isn’t as intimidating as some of its peers. If you’re not into Naruto, then there’s still a worthy game to be had here, but it’ highly recommended you watch the anime first to at least get a feel for the many characters and their evolved forms on offer. Generations is an enjoyable fighter filled with content that comes as highly recommended and in its own right is well worth the price of entry.