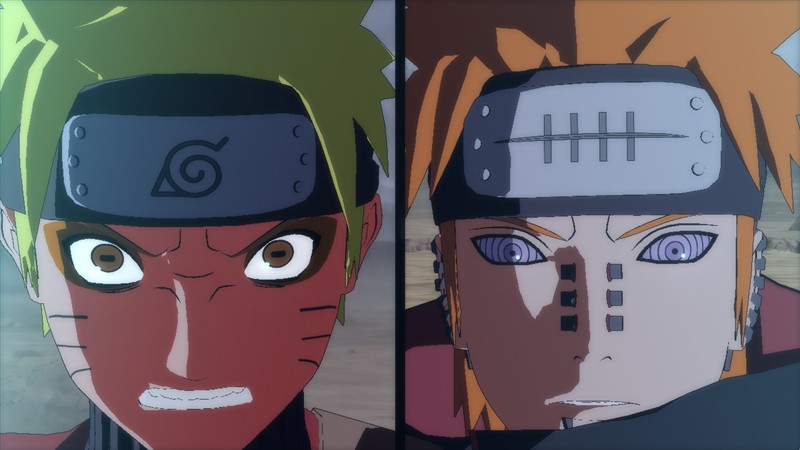 Naruto is back on Xbox 360 in his third outing no less much to the joyous praising of Naruto fans who can’t get enough of the loud-mouthed spikey haired protagonist and his ninja comerades. Whilst the two previous games opted for a less rigid open experience, Naruto Shippuden Ultimate Ninja Storm 2 heads in the opposite direction by offering a more JRPG style story driven adventure. There’s still plenty of fighting, as this seems to be the main crux of the game, but with the more rigid parameters compared to its predeccessors, does this game stand out for all the right reasons?

Naruto Shippuden Ultimate Ninja Storm 2 (NS2) offers two main modes of play, the story based adventure and the standalone fighting game modes for on and offline play. In the single player adventure mode, you’ll be following the story, taking control of not only Naruto, but various interesting key characters as well. The game’s story seems to shift focus from one character to another keeping the steady pace varied. It works especially well as the game thrusts numerous fighting opportunities your way which means you get to sample the characters key to the story, and as an added bonus once beaten, are unlocked and ready for use in the fighting game mode on offer.

The story is an entertaining ride, offering familiar themes fans expect from the series. There’s perhaps some minor plot elements missed if you’re not up to speed with the anime series’ past, but nothing that’ll detract from your less informed enjoyment.

Other than going from A to B across linear pathways to progress the story, you’re able to embark on some other activities to add to the role playing game flavour. There are numerous side quests – including a rather cute email messaging friendship game, and the option to enter into additonal battles to further increase your wealth and unlockables. There’s a whole bevy of items to manipulate, which in turn can make encounters tipped in your favour, and also means you’ve got items to look for on your travels. However, the slow animation for opening or investigating, makes the whole process more of a chore where it’s tempting to just ignore items altogether. There’s also the issue of not really needing to invest in these items simply because mastery of the game’s combat system is pretty simple and you should be winning battles easily on the game’s default difficulty setting without their aid.

The game’s combat offers plenty of diverse looking characters which you’ll meet, greet, and kick the hell out of on your travels. The roster is pretty impressive, which means there’s more than enough variety to suit fans tastes. The actual fighting takes a more cinematic approach compared to the traditional side on viewpoint of previous games. Offering dynamic camera angles which are used to create tension and keep you up close to the action, the combat feels a lot more like the anime as you’re less restricted in movement. However, there are times when fancy camera angles can work against you though as your opponent blocks the view of your character, leaving you guessing at the distance between you and them and setting yourself up to get comboed. The combat is fast paced though, and means with easy button presses you can dance around the enclosed but spacious fighting arena and fight your way in and out of trouble; also thanks to the easy single button tap countering system.

The characters all use the familar ‘chakara’ to power themselves, and with simple button presses you can unleash super attack moves, charge up, and then do it again. With the huge damage these moves can unleash, you’ll make light work of many who you face, and what makes the process even simpler is the fact that the moveset seems to be the same for every character. You’re also able to draft in two team mates who will step in on your command and also allow for the game’s super super team attack to be performed, which is great to pull off. No matter what the game throws at you, you’ll never feel lost (if you want extra challenge, then you’re able to up the difficulty at any time) and feel in control rather than being punished over and over. As a feature for some encounters, you’ll enter into a number of cinematic QTE moments which do require some quick reflexes when being distracted by the action. The game is quite forgiving, and if you do mess up, you’ll start from a very close checkpoint.

There’s some good things on offer here for Naruto fans, although for a few, the step backwards in terms of open gameplay might present some disappointment. Something is lost in the process, yet at the same time, the game has adopted an even more quirky feel. The combat is much improved, and for this, it’s perhaps easier to forgive the adventuring’s change of gameplay.

Unlike the previous two games, NS 2 provides forced camera angles at every turn which sadly means, the exploration element in 3D is somewhat lost. The forced camera pans and shows the characters in dramatic angles which help provide a sense of scale and space. There’s a number of locales, each with their own feel, like the Sand Village for example offering a dry exterior compared to the more settled Leaf Village. The finer details are of good quality, but the frequent loading and dark accompanying screens can take you out of the experience unneccesarily.

The game’s graphics really shine during the fights as the camera sweeps and pans and gets up close when you unleash special attacks.The bouts do feel like you’re playing scenes from the anime. This is really what the game is about, and in this regard has succeeded, much more than what was achieved in the other two games.

There’s a number of tranquil tunes on offer which are related to the area you’re currently in. So, be prepared to marvel at the delights of the Leaf Village theme as you hear it for the 1000th time. You can however, ditch the music and simply stick with either the English Dub, or the original Japanese voices with subs. Whatever you prefer, English or Japanese, at least the option is there to cater to everyone’s preferences which is most welcomed.

The main story mode offers plenty of hours of entertainment, and once the main story is beaten, you can continue the adventure by taking on more side missions and finishing off any collecting tasks etc. If you just want to jump into the fighting, then there’s the mode which takes the battle online where you can test your skills against the massess. Alongside some leaderboards, the competitive spirit is much alive here.

For fans of the anime, this is a must have game, and to be fair, the new RPG approach might appeal more as a fitting change making the game stand out against its predecessors. The fighting is impressive, the characters on offer varied enough to cover all tastes, and the simplistic controls make the game highly accessible. If you’re not into Naruto, then you would do well to take a look at what’s on offer because the fighting element (as showcased in the demo) is solid enough to entice. If you think of the adventuring as a more indepth story mode you’d see in other fighting games of the past, then be surprised and get stuck in.