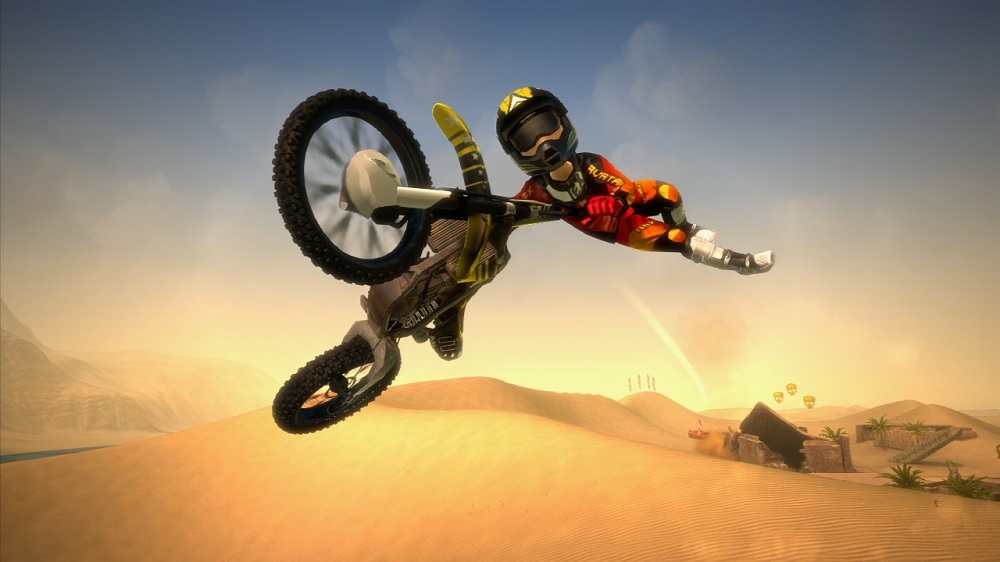 As a casual racing fan at best, Motocross Madness isn’t a game that I really expected to enjoy a great deal. I had no doubts about the game itself, but it usually takes something outlandish to get me to really jump on board a racer. Surprisingly, it only took a little customization and my own avatar to set this title apart and make me want to play more.

Motocross Madness is, obviously, a motocross racing game that takes place both in feasible locations like the outback of Australia, as well as some truly crazy locations like Egypt, around pyramids and ruins. There are ramps a-plenty scattered throughout each location, all just waiting to launch you high into the air to perform tricks with the right bumper, left bumper, X, Y, and B buttons, which all build your boost meter to give you a burst of speed. A helpful mini map at the bottom of the screen makes it easy to tell your position in the pack and detail the course, all while simultaneously highlighting the available shortcuts you can try to use to get lead or catch up. The short cuts are sometimes easy to manage and other times quite a trial, as one I found particularly nasty was a narrow log crossing a gap that would crash you if you weren’t careful. 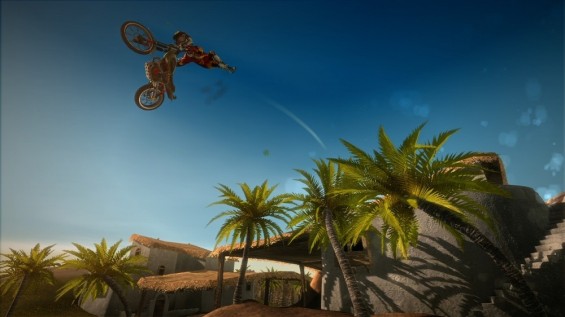 Scattered throughout each event are giant gold coins that give you a cash reward for each one collected, and blue boost tokens that fill up your boost meter. Finishing in first, second, or third nets you a cash reward, and the cash earned from placing and collecting coins can be used to buy more bikes, parts for your bikes, and gear for your avatar, all of which you unlock by leveling up by earning experience points – and you earn experience from doing nearly everything, including crashing in the most amazing fashions imaginable since the game even keeps track of the distance you fly from each accident.

When I say avatar, I mean your literal Xbox 360 Avatar. While your results may vary depending on how much you like your cartoon self, I was personally racing around Egypt and Iceland wearing my Prototype 2 James Heller outfit and sporting Baird’s goggles from Gears of War: Judgment, which together made me feel like a complete badass on the track, especially when I was “on fire.” If you manage to max out your boost meter without making any mistakes, your bike’s wheels will catch fire and look incredibly awesome. I felt like Ghost Rider through most of my races, and combined with my avatar’s look, was having a blast with just the visuals alone. 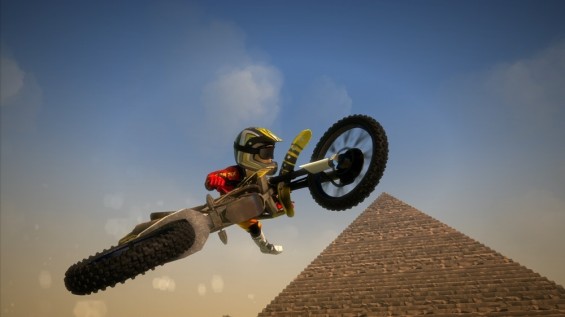 The rest of the game looks on par with the avatars, meaning a bit cartoony, but with much, much better textures than you’d expect from a game that features the mostly textureless ‘toons. The bikes themselves look fantastic, and the small touches like those found in the Egypt events – tire trails in the sand or the way that sand blew through the air – really make the game look nice in motion. The music is also really catchy, energetic, and fun, and the main menu theme is so great that that I could seriously listen to it every day without getting tired of it. There’s no crappy licensed music from band’s you’ve either never heard of, don’t care about, or outright hate, just good old fashioned developer crafted listening to enjoy.

The only downside to the game is really its content. While the leveling and upgrade system compelled me to continue playing to just get a few hundred dollars more to unlock that next bike part, there just isn’t that much to do. There are only nine races, which is downright anemic, and the ability to re-race through each track just to challenge the developers themselves hardly adds anything substantial to the game. What is a unique addition is an exploration mode for you to drive through at your leisure, which essentially is a free roam biking session where you can collect tokens and collectible skulls instead of competing with other racers. It’s a bit strange, but also fun to enjoy quietly while you perform tricks and look for the best way to launch your avatar toward a collectible. 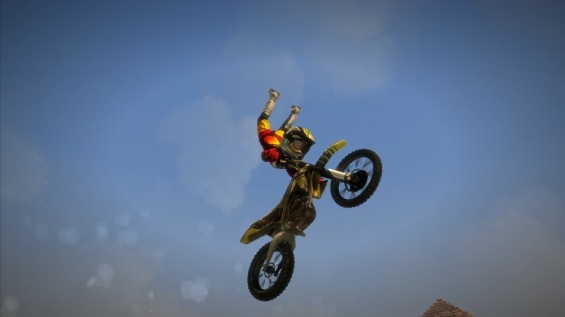 The game also features Famestar, which allows you to make your Xbox 360 Avatar a superstar by completing challenges that increase his or her fame across each game that uses Famestar. This is the first game I’ve played that uses the system, but I’m curious to see what it can do if developers stick with it.

While the game does have eight player multiplayer support, and the exploration mode can eat up a lot of time having you search for goodies, the overall lack of content with only nine tracks makes the game seem a little lacking, which is a shame because I found it to be a blast to play. The controls were a bit dodgy for me from time to time, and I had difficulty on occasion getting my bike to launch off a ramp in the direction I intended, but the physics are forgiving and fun instead of being drearily grounded in reality. Overall, Motocross Madness is great fun, but it will leave you wishing there was more fun to be had.