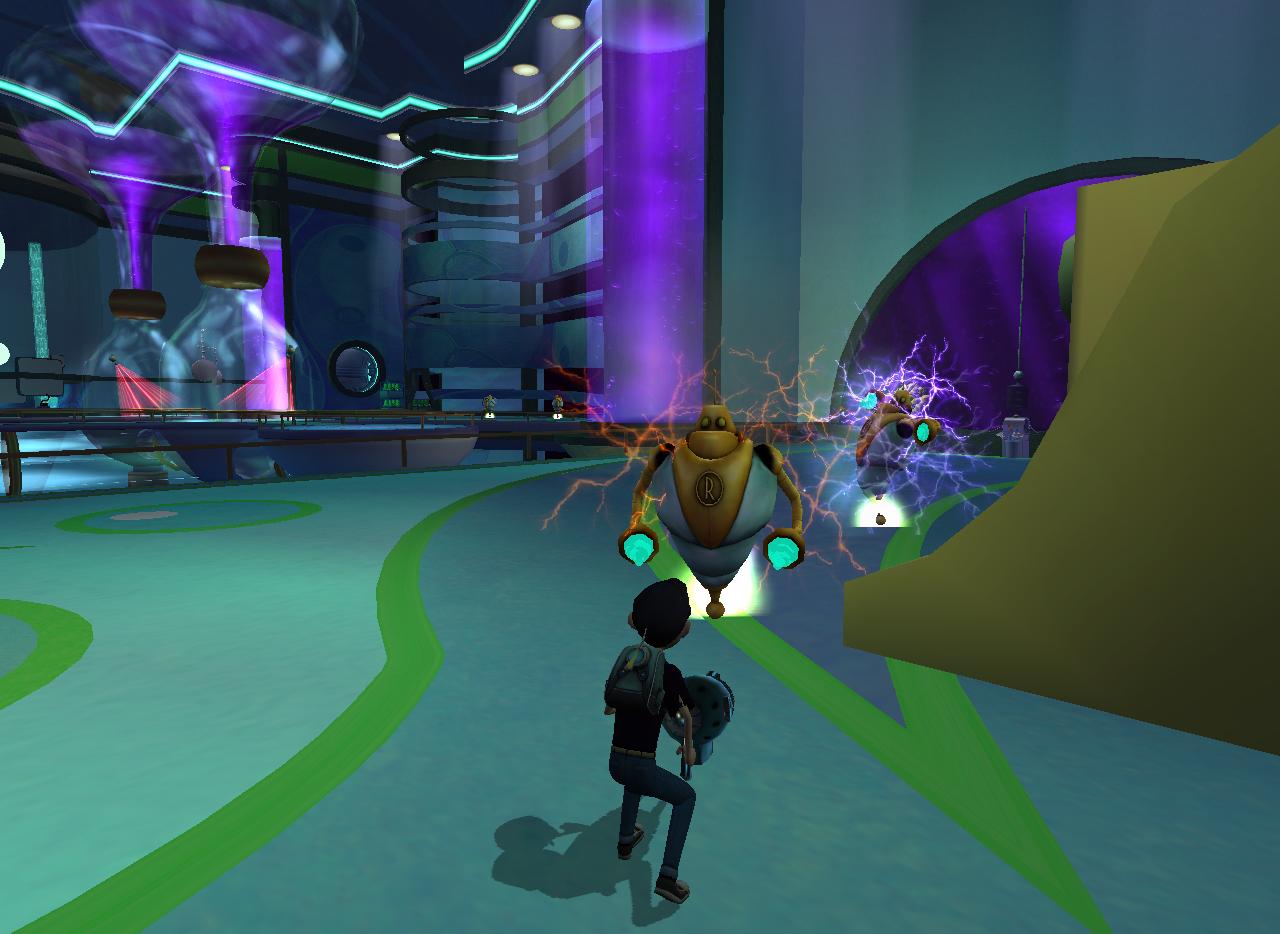 Meet the Robinsons is based on the Disney animated movie of the same name and features the young Wilbur as he battles the dastardly Bowler Hat man, lots of ants and plenty of puzzling moments thrown in for good measure. The game features elements from the movie but is an entirely new game exclusively for consoles. Is it a kids game or will older gamers find enjoyment also from the madcap time traveling adventure game that presents itself?

Meet the Robinsons is a pure adventure game that sees gamers take control of the mischievous Wilbur as he wanders the Robinson’s household and other alternate realities. The game is all about technology and thus gamers are given typical adventuring antics but at the same time there’s an underlying theme of gadgets and their use. Gadgets are not only paramount to success but a core feature of the explorative and information aspects of the game’s story.

Early on in the game your task is to hunt down specific pieces and then return them to a machine that will construct items for you. Here you are able to upgrade Wilbur and also the gadgets he has found thus far. One of the gadgets is a handy scanner that allows you to scan objects, including people for a breakdown of what or who they are. The scanner is a most useful tool as it also comes in handy when dealing with the game’s puzzles and enemies.

Wilbur is also equipped with a dissembler gun which fires off a charge which will then breakdown certain objects into basic parts. These parts can then be used to upgrade or create new items. The dissembler gun is also very handy against certain enemies and will allow you to shock them into submission. Another weapon is the charge-ball glove which allows Wilbur to fire off an energy blast at multiple foes if needed. This is a more direct attack weapon but does have its uses outside of combat. There are other weapons later on in the game but I won’t spoil them for you here.

Throughout the game Wilbur will need to do the typical things that any adventuring type will need to do to progress the game’s story, yet there’s quite a variety of side activities to mess around with too. Things like monkey ball style navigation of maps (you know – in a huge ball). Charge-ball, a game of wits versus the computer in a destroy each others blocks type affair. Havoc glove digging which lead to various treasures and allow you to play a Mr. Do type game underground. Here you basically have to avoid the pitfalls of rocks and enemies to reach the exit, sounds easy yet there are certainly some frustrating moments to be had here. The scanning is a mini game of sorts in that it’s optional but can reap rewards beyond getting an achievement. Scan as many things as possible throughout the game and be rewarded accordingly (130 scans needed to get the achievement). On the main menu there are also some security shooting mini games to try and beat, whilst not a full on game they are fun in short doses and great for trying to beat high scores.

There’s a distinct puzzle element to the game early on and at times these may cause younger players a mild headache. Heck, some caused me a headache, but with lateral thinking and remembering to use the scanner these moments are easily overcome – kind of. The puzzle element does offer some variety to simply wandering from location to location and although things aren’t always clear as to what or where to go next I’d say they were welcome.

Despite some minor clipping issues Meet The Robinsons looks very nice indeed and will no doubt make younger gamers feel like they are actually playing the movie, so to speak. The colours are bright the animation exaggerated and wacky but all in all the whole feel of the game is entertaining to watch. There’s some splendid cut scenes which use the game engine and once again do a grand job of recreating the quality of the actual movie. It’s hard to fault the game’s graphics here due to the subject matter originally being an animated movie. It’s not going for realism here and so for a cartoon inspired game everything is pretty much spot on.

The sound is of a high standard and with voices provided by the movie cast the game delivers what gamers who have seen the film expect. The story is pretty simple to follow and with some comedy moments thrown in; Wilbur and close allies are a loveable bunch (or you should be by the end of the game). Other sound effects do the job as you would expect them to and the music is simply fitting to the game for the movie feel the game presents.

Meet the Robinsons isn’t the longest game by any stretch of the imagination, yet youngsters will no doubt grab more hours out of it than older gamers. For achievement hunters then playing through the story more than once is probably likely and with the other exploration achievements there to tempt you I suspect that most people will play more than once, unless of course you are ultra thorough on your first play. Sadly there are no multiplayer options here and so for the longer term there’s not much to do once all achievements have been gained.

Meet the Robinsons is an enjoyable time travelling romp although it barely touches on what we would expect from time travel – you know going to ancient lands throughout history. The game focuses on the future for the most part and in this respect is somewhat different. For kids who have seen the film then this game is going to be a grand expansion for them to get some hands on with Wilbur and Co. For anyone else then there’s some decent adventuring to be had here despite the simplicity of the game’s premise. The gadgets are neat, practical and everything just seems to work in a well rounded single player package. My only real complaints about the game are the lack of longer term appeal especially for older gamers and no options for multiplayer which could have added a whole new layer to the game outside of the story mode. Meet the Robinsons is available now and well worth a play if you’re into puzzling/ adventuring with some minor combative elements thrown in.