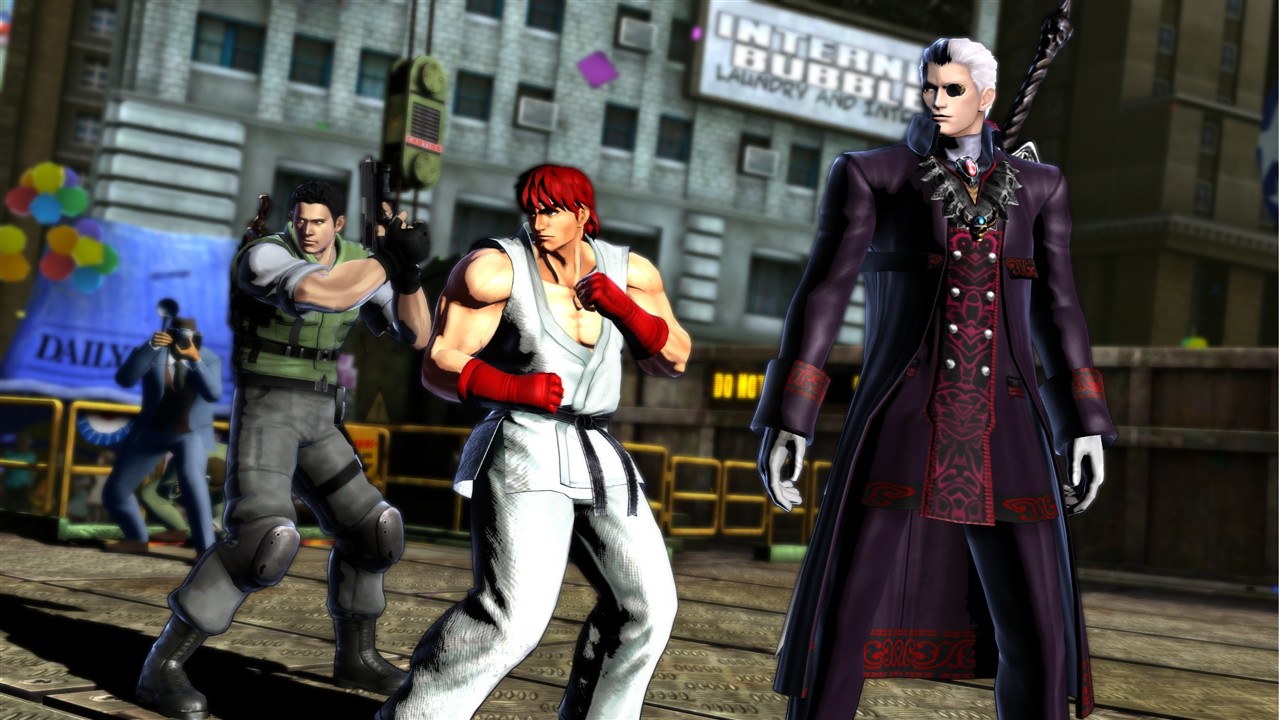 With Capcom’s long heritage of fine beat em ups it comes as no surprise really that we’re here with the arrival of Marvel Vs Capcom 3 (MVC3). With the company not only fixed in fighting game lore, a slew of other franchises across multiple genres sits in their coffers to be used at liberty, and so here we are. With the culmination of years of effort and creative design brings the comic and video game world even closer together. There’s really no harm presenting a fantasy match up scenario is there? It’s like something everyone who’s into gaming can relate to and perhaps has thought about in the past. Teaming up the two camps for a third outing might at first come across as milking the tried and trusted, but when there’s bucket-loads of fan service thrown in, it’s perhaps too easy to ignore. Maybe this is what gamers want, enough elements that appeal to them and the product is instantly sold regardless of how many numbers it has in its title. Not to take too much away from Capcom’s latest effort, as it seems in it’s own right there’s something very enjoyable at face value, however, in terms of appeal how well does the transformation from 2D into the third dimension compliment the series and move it into expected realms?

From the offset you’ll be presented with the most basic of menus, functional, to the point, and guiding you in multiple directions. For those of you not hooked up to the Xbox Live network you’ll be able to sink your teeth into the Offline Mode and its bare bones playing arena. On offer here is the standard Arcade mode whereby you’ll pick a team of three characters from either of the two camps, and in any combination you desire. You’ll then tag team fight your way through several stages until you complete a story section for one of the characters on your team.

There’s a Versus Mode for local players to go head to head using the same parameters as the Arcade Mode. There’s also a handy but basic training mode where you can unleash all manner of attacks on a dummy opponent who will just stand there and take whatever you dish out. The moves on offer follow a similar pattern for all the characters, and range from quarter circle and half circle type movements on whatever controller you’re using – it’s familiar territory for anyone who has played a Street Fighter game in the last 10 years. In terms of accessibility a new ‘simple’ control option is available which aims to provide an easier input method for those less experienced. Perhaps for the less inclined to study the characters moves and would rather tap away, they can still do so and get a great sense of satisfaction that they won by their finely honed skills of button mashing. With so much action happening on screen, it’s easy to make mashers look like they are doing something right and therefore gives the game a very open nature when in fact it’s quite closed. Sadly if you’re a beginner wishing to learn and get away from the school of button mashing, then the game doesn’t really do you many favours and leaves it up to your own intuition to learn how to fight well unaided.

Lastly there’s a Mission mode which is kind of like an extension of the training mode except you’re required to input particular moves in a progression tree. The inputs start out pretty basic, but around half way become far more challenging. Whether you’ll be able to pull off the same moves in the heat of battle is down to how much you practice, but still it’s an extra layer solo players can mess around with. One gripe here is with the input display requiring you to press a button twice to see what moves you have to perform, whereas in games like Street Fighter, the required button inputs are displayed on screen. It’s minor, but does slow down the pacing and make things unnecessarily fiddly.

Sadly, aside from a gallery which allows you to view all the unlockable extras such as 3D models, artwork, ending scenes, music and audio sound bites, there’s little else to do. It would have been nice to have a more fleshed out story mode, similar to the Blazblue games, and some extra modes such as survival would have been welcome. It’s not all doom and gloom though because there’s enough to play with in what’s available and if you are hooked online you can always tackle the ranked and unranked matches with the many willing fighters on Xbox Live.

MVC 3’s biggest asset is its impressive roster of some 38 characters from the two camps. There’s someone recognizable for everyone and if you’re well up to speed on your comics and games then you’ll probably be familiar with nearly all of them. Whether you’re a fan of Wesker from Resident Evil, a sucker for Wolverine from the X-Men comics, perhaps a Chun-Li fan from Street Fighter, or a Morrigan lover from Darkstalkers , maybe a Hulk or She Hulk fan; you’re literally spoiled for choice. What really sweetens the deal is the fact that every character has 4 costumes each meaning there’s a plethora of visual diversity to suit a number of tastes. If you want to go a bit deeper you’ll observe the colour swaps for many of the Marvel characters are actually used in the comics.

When fighting, the screen can become filled with splendid animated effects and text boxes. It’s a comic book come to life and really is something visually impressive on its own level. It’s extremely over the top as you’d expect from the clash of such magnificent teams not once is there a dull moment, even if you leave the character’s idle you’ll observe something going on in the vibrant looking backgrounds.

The transition to 3D is smart and well defined using the comic book art direction to retain the flavour from the past 2D games. With all the animated effects intact – many are familiar from the previous games – and smooth operation even when things go nuclear and it’s obvious Capcom has made sure nothing takes a hit. Seeing the characters in motion in full 3D is an effective evolution for the series and one that keeps the aesthetics very much contemporary.

The music changes with every stage and whatever menu page you’re looking at although might not be to everyone’s tastes but can be toned down in the options. The rest of the audio are various sound bites from the characters (which you can tweak from English to Japanese), the over the top effects of special and super moves and the cries of those attacking and being attacked. Much like the graphics, there’s a lot to take in and with the 38 characters all being voiced as you’d expect them to be in such an animated game there’s never any let up as soon as you press start.

It’s probably safe to say that MVC 3 isn’t the most in depth fighting game to date, however for most there’s a fair bit of learning on offer and with so many characters to choose from you could be studying for quite some time. Underlying the entire game is a title system whereby achieve certain goals and you unlock a unique title to show off to all and sundry locally or online. In this regard if you’re a serious collector, then expect to pump in many days and weeks to come close to unlocking them all. For those less serious then you may never be able to get them all but always have something to strive for if you choose. A handy info section [Licence] is viewable from the main menu and fills you in on all sorts of data about your playing style, character usage and win loss ratio. With the lure of seemingly infinite online combatants, and a lobby system for 8 players means there’s enough incentive to take things online if you’re up for the challenge.

In terms of visual fidelity MvC 3 is a splendid tour de force of colour, funky sound effects drenched in a downpour of artistic licence. It’s certainly a game for fans of the series and the characters from both camps. In terms of an accessible game, Capcom has tried to accommodate newcomers to a degree, but really there’s not enough tutorial or explanation for those who would like to participate beyond button mashing. There’s a lot to do behind the scenes, despite a general bare bones approach to things like the story and game modes on offer. If you’re after a flamboyant and spectacular looking game to while away hours, then this is one fighting game that is well worth checking out. The tag team element offers its own tactical strategy which sets it beyond other more recent fighting offerings. So, if you like fighting games and are looking for something new then by all means get this. If not, then rent it first and see if the lure of Ryu versus Spider-Man in glorious 3D for ever more is enough to suck you right in for the purchase when it’s time to give it back to the store. MVC 3 is an impressive game and one that shows it’s possible to place any game character into a fighting game and make them look cool. The question now remains is where do Capcom go from here, as we’re already getting Streetfighter Vs Tekken X at some point, the potential collaborations are limitless.