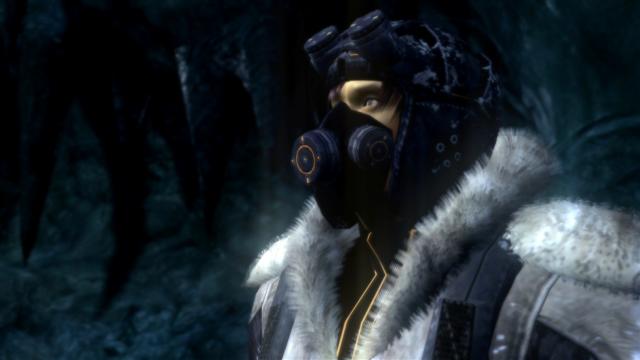 Lost Planet tells the tale of colonization of another planet and in this case an icy one. Where the colony has flourished for many years the threat of Acrids (residing beasts) on the planet means that humans have had to high tail it out of there. However only the privileged few were able to leave the planet and so those left behind to fend for themselves became known as Snow Pirates. These guys are perhaps a little bitter after being shunned and left to tackle the Acrid hoards.

As time goes by the humans discover that the Acrids hold a desirable energy source known as T-ENG and with this discovery means that the human race becomes determined to fight and harvest this energy. In game players assume the role of Japanese looking Wayne. Yes, an unusual name for a Japanese man but hey I guess this is the translation for western markets. Either way, Wayne and his father are part of a team whose job it is to rid the Acrids from the planet using VSs or vital suits (mechs). Well after an encounter with a rather large Acrid beast Wayne’s father is flattened and assumed to be dead. Barely escaping the fight with the Acrid, Wayne is left in turmoil after his father’s death and wanders out into the icy wastes in grief. Here Wayne becomes frozen for some time before he is discovered and brought back to life by a group of snow pirates. From here Wayne suffers from amnesia but begins to slowly remember his former life. The snow Pirates have a goal of wiping out Acrid hives and with Wayne’s VS piloting skills makes him perfect for the job. This is where you come in as you battle your way through 11 levels of snowy carnage.

At its heart Lost Planet is a simplistic third person shooter whereby there are lots of on screen enemies for you to shoot up. The enemies are modeled on insects (although there are some human adversaries as well) and come in various sizes and forms. The main aim other than survival is to simply kill the smaller Acrids and head on over to the main boss of the level. The bosses pose a larger threat and require a little strategy if you are to be successful. What is common amongst the majority of the larger Acrids is a weak spot on their bodies. Shooting this area is the key to success and the perfect way to take down overbearing beasts. It’s not all plain sailing though as Wayne needs a constant supply of T-ENG to keep himself alive. T-ENG is in plentiful supply (especially on the easier difficulty settings) and can be gained by shooting enemies to blowing up waste littered across

the levels. Having plentiful T-ENG means that Wayne can take a fair few hits and have his health be replenished by the T-ENG however due to the cold his T-ENG reserve slowly counts down regardless of what the player is doing.

Lost Planet features some neat gameplay features namely the Vital Suits which can be piloted where ever they are found. These machines enable Wayne to move more quickly and dish out suitable punishment to anyone and anything that gets in the way. That’s not to say that the Vital Suits provide an indestructible playing experience as players will discover that these suits do have a tendency to be destroyed quite easily depending on the foe. What is rather cool is the option to pick up weapons for the VS and attach it. These weapons come in the usual forms such as Gatling guns, lasers, rocket launchers and even shotguns. Players are also able to wield these on foot should they desire however the downside is that movement is usually restricted. Further more there are some conventional weapons for Wayne to pick up should players decide to ditch the Vital Suits and take the fight on foot.

Another cool feature is the ability to use a grappling hook to reach places which certainly adds another level to the game. The hook can be used at anytime and whilst a grappling hook isn’t necessarily a new feature in gaming it does open up the use of the full 3D space within the game world. There isn’t really much more to say about the game other than it follows a distinct pattern of navigating the terrain to reach the end level boss until all 11 levels have been bested. As I said before it’s very simple in design and works well for what it is.

little underwhelming in others. Being set on an icy planet also means that the colours used are very similar throughout the game; although in the latter portion of the game we do get to see some variations. The character models throughout are very good and credit has to be given to the team for the animation especially for the Acrids who move very fluidly indeed. The art direction is certainly very good and with the monstrosities players face throughout the game provides an exhilarating playing experience as huge Acrids suddenly burst through the ground and attack.

killing by fleshing out the story. There is some very impressive lighting used and in general the graphics are very much like watching an animated movie.

If I were to complain about the graphics then that would have to be the incoherent camera which seems to zoom in when in enclosed areas and leaving you in a pseudo first person mode. The camera can be controlled and with handy 90 degree turning available using the bumper buttons makes aiming fairly intuitive. However I must say that character movement and aiming does feel a little on the sluggish side. Players can zoom in and even enter a first person viewpoint if they choose but the game automatically zooms back out to the default view when Wayne is hit or performs an action. The bottom line is the game is meant to be played in third person.

Other issues I noticed when playing was a lot of screen tearing which although annoying didn’t affect the game too much. What became very annoying was when the difficulty is ramped up and therefore more enemies are on screen. In the most hectic of moments the game becomes a bit of a mess as there is violent screen shaking combined with lots of smoke effects and Wayne being bounced around the screen unable to do anything but pray as players lose sight of him. At these points I began to wonder what I was doing playing the game as what’s the point if you cant see what you are doing until you see the game over screen?

The game’s sound is typical Capcom quality and features some average voice acting. I still can’t get over the choice of name for the leading character but hey that’s probably just me. The in game sound effects are all as you would expect and with explosions, gunfire and the cries of shot up beasts fills the cold air throughout. The music is also fitting and provides an score that suits the moment whether that be simple exploration to massive boss battles.

Lost Planet features 11 single player levels and four levels of difficulty to play them. It is certainly not the longest game to beat but is a game that requires a lot of replay if you are to truly master it. The Extreme difficulty is most certainly a very hair pulling mode to play but ultimately is very rewarding if you are able to beat missions at this level. To add some exploration element to the game, there are target markers littered around the levels. These take the form of coins and have to be shot to register. They spell out words and unlock achievements if you can find them all on each level. What is more that should you up the difficulty the target markers appear in different locations which means more exploring of the levels whilst trying to stay alive.

Lost Planet also feature online play for those connected and I must say it’s a shame that split screen and system link have been omitted. The online play is very much the same as the single player in terms of gameplay however this time you are treated to team games and elimination modes. As far as I could tell with the play time I had was that the game is very smooth however the camera problems seemed to pose a problem once again, especially in confined areas of the maps. In general for single players there is enough challenge here to make the game last quite some time and as I said the Extreme mode will take some perseverance to master. The online play whilst smooth and adding longevity to proceedings is welcome but for me a little on the underwhelming side.

I’ve enjoyed playing Lost Planet’s single player game and have replayed several levels again hunting for target markers and general stepping up for the challenge on offer. Despite some niggling flaws with the camera and general speed of the game it does feel reasonably polished. There are some really neat effects used and the idea of having the choice to use the Vital Suits or on foot makes for some inspiring gameplay moments. I don’t think Lost Planet is going to appeal to everyone simply because the style is perhaps going to be too much for some players. However those who do decide to take the icy plunge will no doubt have an enjoyable playing experience with Wayne and chums. Lost planet is a very good game but not the greatness I was expecting especially for the multiplayer portion of the game. Either way, it’s available now and certainly worth keeping if you are always ready for a suitable challenge. If you are unsure then a rental might be best for you or try out the demos available on the Live market place.