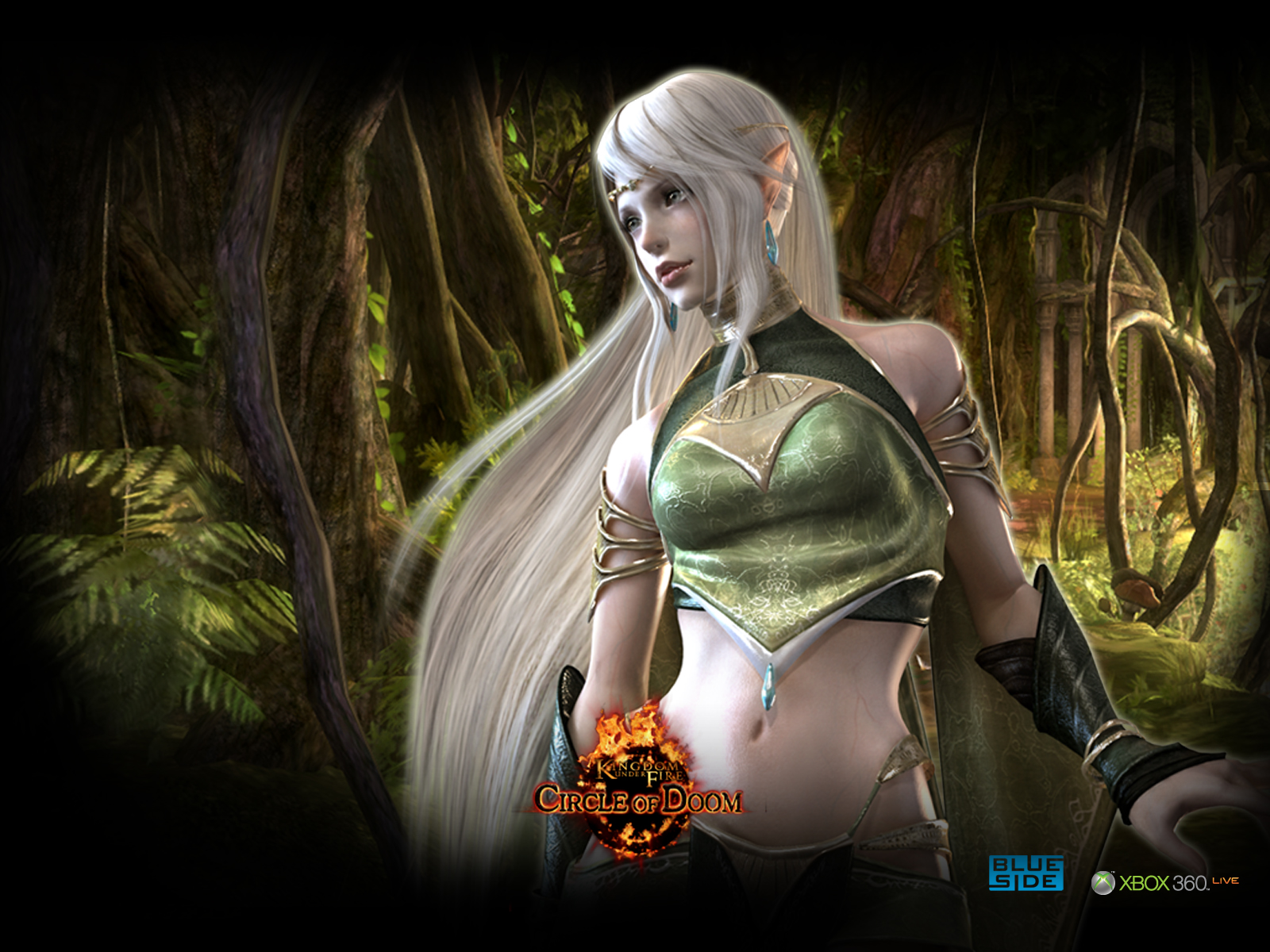 For the record, Kingdom Under Fire: Circle of Doom (KUF:COD) is a spin off game that does not relate to the strategic Kingdom Under Fire games that we all know and love from Xbox. The developers have stated this, and therefore there should be no confusion as to why KUF:COD does not follow the same gameplay style.

KUF:COD is a hack and slack adventure, where players can take control of 6 characters and slice and dice their way to victory. The action mechanic is lifted from the previous Kingdom Under Fire games, but that’s the only real similarity.

Upon choosing a character, you are thrust into a story which relates to that character, in the case of Celine (a female elven vixen) her lover has lost his memory and with her help the task is to restore it. The stories aren’t particularly deep but enough to give a small sense of purpose. Throughout the hack and slash gaming, you’ll be tasked with getting certain objects to complete the quests. These are automatically granted from killing certain enemies. What is more, in a similar manner you’ll also be able to gain additional abilities by killing a certain number of specific enemies, although this process is optional.

Heading out into the wilds, you are faced with fairly linear pathways and an end goal which will take you to the next area. Once a few areas have been navigated, you’ll come face to face with an imposing boss which you’ll have to defeat if you wish to progress further. It’s all pretty standard fare and relentless fighting, and working out how to move on to the next level. There is very little deviation from this and therefore becomes quite dull after long periods of play.

KUF:COD has an RPG type element in which your character gains experience from killing enemies. Once you level up, you can distribute points to three areas of your character. These relate to Health, Stamina and Luck with the latter determining what items will be dropped from the fallen and how often you’ll land critical attacks. The stamina is interesting in that with each slash or strike with either a ranged or melee weapon, you’ll deplete a SP gauge. Each weapon depletes and revives the gauge at different rates and so building up stamina is crucial for being able to perform more powerful combos with the better weapons.

For hunters of items, the main gameplay mechanic seems to be based around this. You level up, you’ll start seeing better weapons/items drops. The better weapons enabling you to attack more efficiently and the questing becomes about the item drops. It’s a never ending cycle and reminds me very much of Phantasy Star Online on the SEGA Dreamcast. In fact the game is pretty much a carbon copy of this game in terms of design and gameplay. The difference being the fantasy setting and a not so comprehensive character customization feature. What’s more players can go online and team up with an additional 3 characters and fight the good fight together – although there are no open lobbies as seen in the PSO games. PSO is years old and it’s interesting that KUF:COD has copied the mechanics of such an old game, but offered no enhancements.

Graphically, KUF:COD looks reasonable as there are some fairly decent character models and varied opponents. The levels are also quite varied and range from lofty interiors full of gothic styling, to outdoor forests – with some areas looking more imaginative than others. There’s a pastel look to the environments and I guess you’re either going to love or hate the effect. I felt it was fitting to the game and it’s style. The real problem here is the attack animations feel very stiff and the fact that enemies seem to merge into each other makes the game looks a little unpolished. Overall I’d say the graphics are functional but nothing to get overly excited about.

There’s some horrid sound effects used here, and whilst their inclusion might be deliberate for certain enemy types, it does nothing for the player to hear repeated sounds with a distinct lack of variation throughout. The music is equally dire, and features a mixture of rock sounding tunes mixed with electronic sound effects. I guess this style has been staple for the KUF games but in this case really seems to grate after a while and adds no real emotion to the experience.

KUF:COD is a long game and is made to feel longer due to the repetitive nature of the gameplay. As mentioned you’ve got 6 characters to play as, and various quests to complete with each one. Then there’s the online play which adds a slightly different element to proceedings. Phantasy Star Online was an addicting game and loved by many, but this was due to the fact that you were able to show off to other gamers your finds. KUF:COD seems to miss this element and therefore the whole premise of going through the same levels to get better items is lost. It’s good to be able to team up with other gamers, but there is no real sense of accomplishment to be had here.

Kingdom Under Fire: Circle of Doom is an average game that will appeal to die hards only, and that’s people who just love to level up characters and collect items for personal benefit. It’s obvious the developers have carbon copied SEGA’s classic adventure game, but as I’ve already said, they’ve missed the crucial element that made the game so appealing. As it stands KUF:COD is a repetitive hack and slasher that will entertain for short bursts of time, however I feel more action orientated gamers are going to get a little bored rather quickly. A lack of variation in the combat and some poor sound makes the game fall short off the mark. If you are going to copy one of the all time great games of our generation, then make sure you grab the element that made it appealing in the first place and somehow try and improve upon it. What worked years ago doesn’t necessarily work in todays action pack markets. Times have changed and I feel there’s no place for a game as basic and devoid of features as this one.