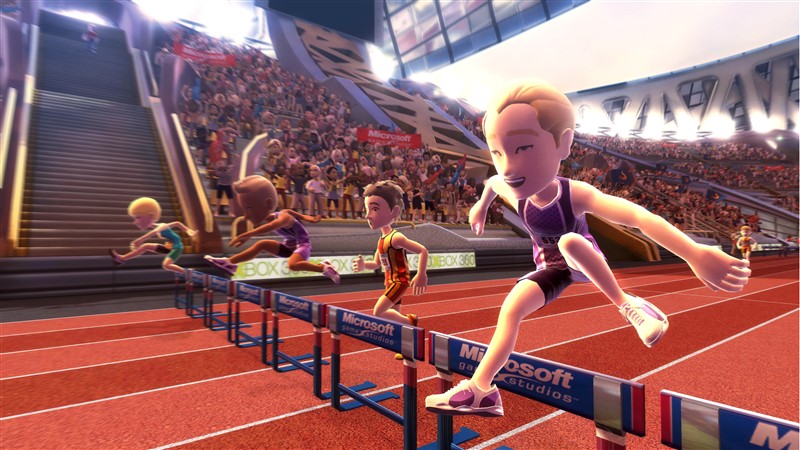 Rare under the roof of Microsoft should produce the killer Kinect launch game considering there’s a lot riding on the initial batch of wares to showcase the arrival of Xbox 360’s latest bit of kit. That said, does Rare’s answer to Wii Sports really entice those who are watching, reading, or viewing to rush out to their local game store and purchase Kinect, the game, and get back home for some sports based virtual action? It’s hard to say, and that’s why it’s our job to convey to you our findings after spending plenty of time with the game in the comfort of our own surrounds.

With six grand sports on offer, some cute looking avatars and whole lot of funky attitude to boot; does Kinect Sports kick the competition into touch or is it a novelty game whose appeal wears thin once you’ve seen and done everything that’s on offer?

The first thing that is probably going to be the main talking point is the control interface and how this reflects on the player’s perception and opinion of the game. Let’s face it, if this was merely an XBLA title using regular controllers it would probably be disregarded by most. However, Kinect Sports is built around putting you into the game without having to leave your home. Yes, you do need a fair amount of room to play (for the safety of others and your belongings), yet it’s a better option than heading out to the track, pitch or court to effectively have a go and compete.

Looking at each sport on offer individually as they all play differently, and you’ve got a bevy of variations to mess around with. The boxing has you punching the air furiously, whilst holding your arms up to block and does a grand job of making you feel like you’re actually… ‘boxing’. It’s only the lack of being hit in the face and subsequent pain in the real world that is missing. If you play on the easiest setting, then it’s quite possible to take down your opponent with a few deftly combo strikes, but up the ante and you’ve got an opponent who is more adept at blocking your shots, meaning you have to think a bit more tactically. It’s well realised as you see your transparent character on screen mimicking your moves, but also a little bit frustrating when your punches seemingly do as much damage as a balloon. Luckily rounds are quick and enthralling, but with limited moves feels very basic.

The track and field games are a bit more varied and have several events to partake in. Most involve some sort of running on the spot to gather speed, and then either jumping at the right times, to er… jump or performing a throw action to er…throw! It’s easy to get into, despite being limited but certainly something that encourages healthy competition, even if playing alone. The only real spanner in the works here is the discus which seems tacked on for the sake of it. Simply throw the discus and that’s it. Is this all Rare could think of? perhaps they were thinking of potential law suits, after gamers spin into their TV sets causing much breakages had the game required you to actually spin before throwing.

Football or Soccer is an interesting addition especially considering you don’t ever have to run with the ball. It’s all reaction based scenarios that you perform, so that’s pass the ball using arrows to guide you. Kicking the ball to shoot, or if the situation calls for it, heading the ball into goal. Alternatively if you’re in defence then intercepting the ball by stepping into the ball’s path, or using ones body to ‘save’ when in goal is the name of the game. This game auto switches you to the player most relevant to the ball which surprisingly works very well but can be a little confusing at times for those less in tune with their footballing side. Out of all the games on offer, this one is the most suited to not wearing any shoes lest you send your footware through the TV screen for an impressive own goal.

Volleyball takes players to the sandy beaches where it’s a two versus two scenario. Against and with the AI you’ll find that this game requires the most awareness simply due to how important positioning is for players. Again, you can’t really move around the court at will and seem to dance around various positions depending on how the ball is played. Jumping to serve and then returning and setting up spikes is all good here, and yes, it can feel as engrossing as playing the real thing. Sadly the lack of communication with your AI partner can mean a loss of co-ordination and a bit of confusion. All of your actions are determined by on-screen prompts, such as ‘Jump’ to block shots, but this this doesn’t always pan out as the AI intercepts the ball sometimes. You basically have to really focus on the where the ball is being played, making this event the least accessible out of the six.

The table tennis is perhaps the best game on the disk as mimicking the actions of a real match is pretty much spot on. You can perform top spin, back spin and even smash shots as you would in a real game, it just seems to sit so comfortably as you play. The AI is good, and when you up the difficulty offers some real challenge as it returns your smashes and changes the tempo of the ball at random. Lag doesn’t really pose a problem here at all, and if you do miss a shot, it’s more likely the AI’s quick return you were not prepared for rather than lag. It’s clever, competitive and means you don’t have to re-arrange your room to fit one of those large tables.

Lastly we have bowling, which like the table tennis is one of the better options on the disk. Positioning and power are key here, and with a continued arm motion when swinging means a bit of spin can be added to the ball as well. It’s simple to play, but a bit more difficult to master and for this reason makes it very compelling. It’s also the easiest game type for multiple players as you take turns with your shots and have the whole screen to yourself.

To round things off there are some extra modes where within the boundaries of the 6 events you can partake in mini-games to add a bit of spice to proceedings.These are more suited to a less competitive and fun party atmosphere and add a some legs to the basic game. You’ll have things like having to save multiple shots as goalie, to hitting numerous returns in table tennis.

Kinect Sports offers the Xbox 360’s familiar avatars as the main characters, which means you’ve got all the customization options (bar your avatar rewards) that come with them. The graphics overall are bright and bold, but are perched more on the cartoon side as opposed to being realistic. There are a few oddities as your avatar moves out of sync with your own movements at times, but in general the tracking seems to be spot on regardless of your size. The game’s easy to use navigation and the fact that the presentation is top notch means you’ll easily feel part of the game and lap up the stadium style atmosphere it presents. Some comedic moments come thick and fast when the game replays your best moments as it films clips of you battling it out in game. The quality isn’t great but still amusing all the same.

The sound has been lovingly crafted as you hear the audience, the announcers, and plenty of snippets of licensed tracks which jump in when you’ve done well like smashed a shot past your opponent in table tennis. There’s some good tunes on offer ranging from Montel Jordon, to James Brown, and their use is perfectly timed. The sound during the actual events is a little more reserved, but when you start to hear the sound of heartbeats when the tension rises, you can tell the developers had a lot of fun implementing the sound effects.

With only six events and quite a few mini games to play there’s not loads to do for the lone player. But add some friends, or take the battle online and you have a game which offers a reasonable mix of fun activities which can be played over and over, more-so if you’ve got competitive friends and family. There’s the option to go split-screen and tackle some of the games like Boxing versus another player locally, but if space is limited, or you’re a bit exaggerated with your moves, you might end up with a few bruises for real after accidentally punching the person next to you. With your profile loaded, you’ve got a levelling up system, where success means you’ll raise your level. It’s something to work towards as you keep on playing, and also means you’ll be constantly unlocking achievements. The game by it’s nature is also quite demanding on your body, and so stamina plays a big part of how long you’ll play in a single session, but this is perhaps synonymous with most Kinect games.

There’s something charming about Kinect Sports in that it’s engaging, entertaining and most importantly fun to play, both alone or with other players. Younger players will be able to get into events very easily, as everything is explained very concisely, and most people are familiar with the actual sports anyway. There could have been a lot more events though, as six does feel a bit bare bones, especially with the simplicity of some of them. That said, as a first foray into Kinect gaming, you can’t really go wrong with what’s on offer here because each event plays very well (bar the discus) and really gets you involved in the activity. There is room for improvement, such as better graphics and more variation, but as it stands, the levels of entertainment you gain means you won’t or shouldn’t feel short changed. if you’re going to get your friends and family involved with Kinect, then you’d do well to slap this game in first to get everyone familiar with what your new controller can do. It’s cool, fun and full of sporting attitude which is incredibly hard not to fall in love with.