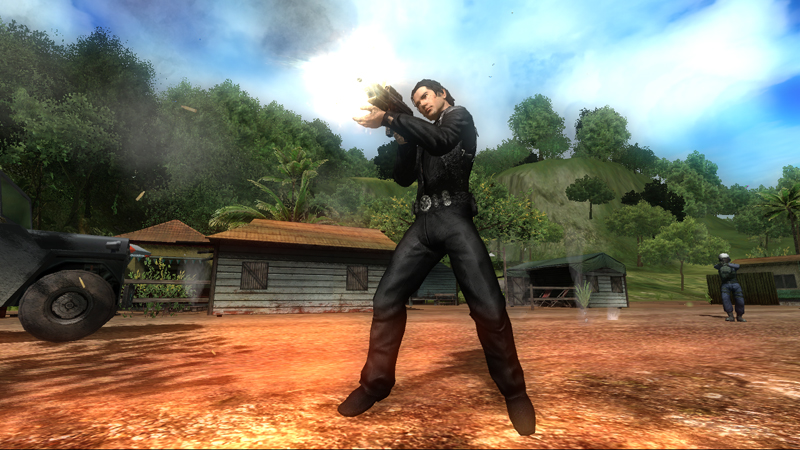 Just Cause sounds like a great game on paper as it boasts 1025km2 of playing space to roam, maim, drive, swim and fly around. In Just Cause players live the life of secret agent Rico Rodriguez as he helps the US stir up things in the troubled region of San Espirito. It transpires that there has been a military coup as new megalomaniac leader General Salvador Mendoza takes the reigns along side his Black Hand militia. San Espirito is up in arms as the people want democracy and peace in their lives and so this spawns the rebel factions as they rise up against their oppressors. Rico on the other hand is simply there to stir things up and act as a free agent so to speak working for the US and the rebels to try and take back San Espirito.

Just Cause is a third person free roaming action game that offers a sandbox world to mess around in. For starters, San Espirito is as big as it sounds and features lots of settlements, jungles, mountains as well as the odd city here and there. What you have available to you from early on in the game is the option to undertake story based missions or if you choose; a number of side missions and activities. The story missions are as you would expect and follow the path of ousting General Mendoza from power. The side missions offers little variety in that you can undertake race missions which are checkpoint time trial runs across the uneven terrain or missions which involve you working for the rebels doing simple assassinations and search and retrieve type activities. The added depth or so it seems comes from takeover or liberation missions which if you look at the game’s map you can see various coloured spots highlighted. The spots represent settlements, military bases and such like and are colour coded to represent which faction controls them. In game, Rico has three main enemy factions to deal with, which are the police, government forces and the Montarno drug cartel.

By initiating a liberation attempt (by simply speaking to a rebel near one of the settlements) players must then kill all who get in the way, whilst destroying barricades and other bonus objectives such as weapons dumps and drug stashes. The weapons based combat uses a lock on feature which makes mowing down enemies very easy and perhaps too easy. Once three barricades have been destroyed, players can either capture a flag (which is simply activating a flag pole with your own flag) or kill the leader. This sounds quite simple and to be honest, it is especially as you will be doing the same thing over and over again. However there are certain settlements/bases that are very tough as enemies use better equipment to defend themselves, such as tanks, choppers and armoured jeeps. In fact some are so tough that players might start seeing red as they die for the umpteenth time from some combo missile attack that not only throws you into the air but then hits you again whilst you are airborne where there is no means of escape. What makes matters worse is the fact that you might dust yourself off and try again using a different tactic only to be destroyed in a similar fashion. Then you are warped to the nearest safe house of which you then have to go through the process of healing yourself and gathering ammo before hunting down a suitable vehicle. I found this aspect of having to heal and then re-supply to be very mundane especially as I was keen on getting my hands dirty again as quickly as possible.

This highlights a glaring problem with the game and that is the game world is simply too big for its own good. Yes there are plenty of vehicles to use such as cars, trucks, jeeps, boats and air based craft including fighter jets. Yet most of the time these will be lost or destroyed leaving you in the wilds with no transport. Well as you progress you do get the option to heavy drop vehicles to your location but the whole system including the menus are extremely slow and tedious to use. The map screen is also problematic as there is no option to set markers or waypoints on the map and so if you do attempt a takeover mission and get blown to pieces you have to find your own way back, by keep referring to the slow loading map screen. This is a highly annoying process and an oversight in that the developers made such a large playing space but omitted a simple system to help the gamer navigate it.

Let’s talk about the aforementioned vehicles for one moment. Well as I said there are quite a number of vehicles to use however there really is only one that is paramount to keeping the game enjoyable rather than a chore. After a few hours play you begin to realise that the only transportation in San Espirito which is worth using are the helicopters. Forget fighter jets, boats or fast cars the helicopters are the most flexible and give the greatest sensation of freedom, that is until you are randomly shot down. I found the ground based vehicles controlled very poorly especially at high speed and with dodgy AI present made driving them a hassle rather than fun. There’s also perhaps too much traffic for the narrow roads often resulting in annoying crashes as straying too far to the right often results in hitting a tree or a cleverly placed rock. In fact talking of rocks, the designers who put these in the game should be hung drawn and quartered. There are simply way too many of them especially off road. It would have been nice to be able to tear through the jungle at high speed but oh no, the level designers decided that it would be too much fun and so placed loads of rocks to grind you to a halt every few seconds.

Just Cause features some stunt moves which for the most part are completely over the top and unrealistic. Players are able to jump from car to car or even better from helicopter to helicopter and magically not get sliced up by spinning rotor blades. What is probably more interesting is the option to Para glide using a grapple and parachute. Players can even target a passing helicopter and if positioned correctly (from behind) will be able to kick out the occupant and take the vehicle as their own. The parachute comes in to play quite often especially if players need to bail out from a helicopter or car that has driven off a cliff. What makes matters tiresome though is that some vehicles don’t give much warning that they are about to explode, resulting in yet another untimely death for our Rico. Other problems occur with the context sensitive options which aren’t fluid in any way and will often cause much frustration as Rico jumps to the wrong vehicle or in worse cases will jump back into the exploding vehicle you have just bailed out of for yet another gruesome death.

Graphically, Just Cause looks great for the most part, with some decent high resolution textures used on surfaces and some excellent water. The sense of scale is also very impressive especially when piloting one of the air based vehicles. However there is an overwhelming sense of déj? vu as you go about liberating the island. There are simply too many places that look exactly like the one you have just come from. Nothing really stands out and with plenty of trees and foliage makes for a detached playing experience as you travel across similar looking lands. The character models are also questionable and in my opinion look rather dated especially the civilians. Rico himself looks kind of strange and animates in an equally unusual manner. His running animation is laughable at best and really should have been worked on more especially as players will be seeing it often.

With a game world this big there are bound to be some graphical glitches from time to time and whilst the frame rate is very impressive there are some issues of cars appearing out of nowhere. Other glitches are things like pedestrians acting strangely even walking on top of each other on occasion.

Sound is another area which disappoints as there really isn’t much on offer bar the usual sound effects and repeated comments from pedestrians. The music is actually quite good and fitting to whatever you are doing at the time; however a distinct lack of variety here means that many players will no doubt end up using their own custom soundtracks. The voice acting is also laughable and comes directly from the school of ham it’s obvious the team spent little on hiring decent actors to bring the few speaking characters to life. I felt very detached from Rico and didn’t really warm to him even though he is portrayed as a smoothy during the cut-scenes prior and after story based missions.

Just Cause offers a massive world full of settlements to liberate and secret items to find (which are marked on the map?) There’s certainly a lot to do once the 17 odd story based missions are completed. Taking over settlements and returning control of each province to the rebels is going to take quite a long time and patience as you are effectively doing the same thing over and over. Sadly there’s no multiplayer or customization options available meaning you are left with a sandbox world single player game with very little choice in what you can do. Unfortunately the novelty of flying in helicopters or racing motorcycles wears thin quite quickly and you are left wanting more things to do.

This review might sound like a slating of the game and to certain extent it is, however I am merely pointing out the game’s flaws as I see them especially in a genre that potentially can offer so much more. Just Cause does have its moments and is generally a good game, just not the great game it sounded on paper. As mentioned earlier there’s a real sense of scale when piloting aircraft which really adds to the atmosphere and is perhaps the best part of the game. I felt from the offset a detachment from the characters and in fact the world itself as you are thrust deep into action with very little explanation as to why, where, when and what.

Just Cause simply has too little substance to propel it to great status and I think most gamers will find the flaws adding up to make a tiring gaming experience rather than the fun one it should be. That’s not to say the game isn’t fun, because it is, just not all the time. Should you buy Just Cause? Well I personally believe that gamers would do best if they rented first to get a flavour of what to expect and then if they feel that doing the same repetitive tasks over and over is their idea of a good way to spend their money then Just cause is definitely one for them. The demo pretty much offers everything in the game bar the checkpoint racing and is perhaps the best way to see if you like the game.