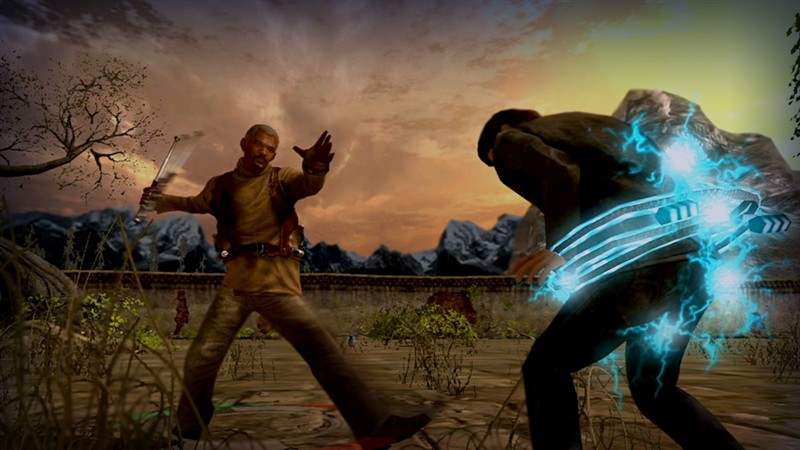 Movie tie in games have a bad habit of being pretty lame attempts at bringing the movie experience into the home, where we can all relive the moments we enjoyed at the cinema or where ever we watched the film. There have been a few notable exceptions to the rule, but the consensus amongst the gaming press is that movie tie in game equals rubbish. Personally I feel this is down to the fact that the developers can somewhat rest on their laurels, as the movie itself is a grand form of advertising for their product. Unlike a new intellectual property that needs something a little more convincing to break it through the deluge of mediocrity, movie games can just be released and gamers will show an interest if the movie is well received.

Jumper is the latest movie tie in game, with Brash Entertainment developing the title. The movie itself is receiving mixed reviews, even though the premise seems to be quite an interesting one – especially for a video game. The game, and movie is about Jumpers, who are people with a genetic anomaly that enables them to teleport themselves instantaneously to anywhere on the globe. They have existed for centuries, and are engaged in a conflict between them and another group called Paladins – who are hell bent on wiping the Jumpers out for good.

The game follows the story of the film’s leading character Griffin, who after witnessing the death of his parents by the hand of the Paladins, at an early age, swears to avenge them and finish the Paladins once and for all.

Sounds good thus far, however has Brash managed to convey the elements that make the movie “cool” into the game, or is this another title that will be ridiculed by the press and purchased by the uninformed masses regardless?

Jumper is pretty much a fighting action game where you’ll navigate linear pathways through various levels taken from the movie; taking on wave after wave of cannon fodder like goons. You’ll start with a basic weapon and as you progress you can find other weapons to aid you in your adventure. The way the combat works is that with the four face buttons on the controller, A, B, X, Y these correspond with attacks from the front, back, left side and right side. By pressing any of the attack buttons you’ll teleport to the nearest opponent and start the attack. The idea is to unleash a deadly combo by pressing each one twice before changing direction, so for example a typical easy combo could be A, A, B, B, X, X followed by Y. It seems the maximum limit is 7 before you start the process again. Each opponent who you lock onto using the L Trigger will have a circle around them which shows you where you can potentially attack. To begin, you’ll face low level Paladins who won’t put up much of a fight at all, and you can pretty much unleash any attack you want. As the game progresses, you’ll face tougher opponents that will display red markings around their circle. The red markings indicate that if you land an attack from the side that has a red marker, you’ll get counter attacked and knocked to the ground. This is not advisable because, the Paladins will then try and gang up on you leaving you vulnerable to multiple attacks before you can recover.

The trick seems to be to read each of the Paladins weaknesses and change your attack strategy accordingly. As far as I could tell, the Paladins in one group all displayed the same weak point, so by the visual cue you have (every Paladin in each group looks exactly the same) you can easily adjust your attacking sequence to suit. It’s a fairly easy process once you get the hang of things, and although you can effectively button mash through the early portion of the game, later on you’ll need to start using the system properly if you are to succeed, especially when faced with 7 or 8 opponents at a time.

The Paladins do get tougher and will sometimes fire projectiles at you to stop your combo or to hold you (a little like Spider-Man’s web) so they can beat the hell out of you. Luckily Griffin, has some nifty evade move and the option to break free of any grab moves the Paladins unleash. It’s here that you’ll witness some cheap AI, but again, once you figure out what the AI is trying to do, you’ll be able to take them down with ease.

Other than facing off against Samuel L Jackson’s character from the film in a couple of boss battles and some other moments against the Paladin henchmen, there really isn’t much more to say about the game. One neat feature that pops up automatically (as far as I could tell) is when Griffin grabs a weakened opponent and teleports him/her off to some far away place. Here you are treated to a cut-scene where Griffin and victim are shown; with Griffin then teleporting away leaving the victim to die. These are actually quite amusing moments, and I wish there were more of them and a way to activate them on the fly. A favorite, was when Griffin teleports to a car. He adjusts the wing mirror and then teleports away, leaving the victim looking confused still in the car. The camera then pans out and you realize the car is in fact in a junkyard about to be crushed by an industrial car crusher. Obviously you don’t get to see the resulting mess, but these moments are still rather cool.

The graphics are pretty poor throughout and not just in terms of texture detail, but the character models as well – everything looks and animates with a last generation flavor, and there’s little variation. The locations just feel completely bland and lifeless, as there’s nothing here to make you go wow. You’ll want to hurry through the levels as quickly as possible and forget about looking around. I found the frame-rate to be pretty poor at times too, to the point where my eyes began to water. Everything is dull and really feels like no effort was put in to make the game sparkle. The only part of the game that looked decent were the comic book style cut scenes between levels.

The sound is average at best, and although we get the voices from the movie, the game has such a dull presentation that any audio flare is diluted. Griffin has some amusing comments to make as he fights the Paladins, and he seems like a likable individual in an anti- hero type way. The music is typical movie score and the rest of the sound effects are as dull and lifeless as the graphics.

If you thought having bad graphics, poor sound was terrible, well the stinker is the length of the game. It can easily be beaten in a couple of hours on a first play through. There are hidden items to find and obviously there’s a learning curve to get to grips with. On my second play I was able to beat the game in well under an hour! The achievements come thick and fast, and I guess hunters will love the easy 1000 points here. There’s no thought put into the game’s achievements at all and so you’ll rack up 2-300 points within the first 10 minutes of play.

Jumper is a typical movie tie in game, in that it follows the tried and trusted formula of being completely rubbish, something we all come to expect. Brash have done a terrible job at bringing the film to the home, and I really do wonder if they actually cared when making the game. There’s no innovation and everything is just dull, repetitive and devoid of any redeeming features. Would I recommend buying this game? Hell no, but I would recommend a rental if you are an achievement hunter as the easy 1000 points should be a nice boost to your score. Once done, you can return the game and carry on playing proper more challenging games.