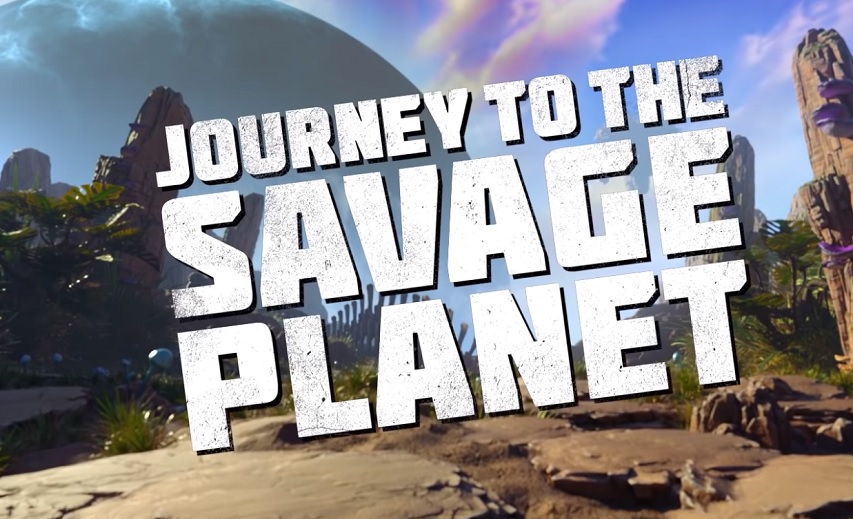 Typhoon Studios’ Journey To the Savage Planet released on consoles and PC and offers a humour-filled take on the adventure exploration genre. Think No Man’s Sky or Super-Metroid style gaming with a touch of humour tossed in. You take on the role of either a male, female, or dog protagonist as an explorer for the 4th best interstellar exploration company Kindred Aerospace. You land on an unexplored planet (AR-Y 26) and are tasked with not only fending for yourself, but gathering resources and information for your superiors back on Earth. Easy!

Your character’s crashed ship comes complete with a 3D printer which enables you to craft all manner of useful items gathered from fallen lifeforms and collected minerals amongst other things. It’s also a useful tool for upgrading your character’s jetpack, scanner and weapons.

First thing most players will notice once you find-your-feet ( aside from the crazy adverts and messages from Kindred Aerospace that loop inside the ship) is scanning is a big part of the gameplay. Once you venture outside the ship pretty much anything and everything is scannable. Doing so provides useful information such as enemy weaknesses and hints of where or what you need to do next. As well as details of all the weird and wonderful flora and fauna of the planet. Whilst it doesn’t necessarily interfere too much with running, jumping and shooting around each area it does become second nature even if it’s not entirely necessary. You’re an explorer after-all so collecting data is very much in your remit.

The other aspects of the gameplay revolve around using items and shooting-up alien lifeforms which prevent your progress. They also net valuable resources which players use for upgrades. Shooting in particular is fun, often leaving squishy remains, but players need to be mindful of what they shoot, as passive creatures roam each area. It’s not nice shooting these cute and innocent looking creatures especially as they might come in handy for completing some of the objectives or side missions.

Exploration, activating teleports and jumping, rail-riding are all key factors to surviving the planet. As new areas unlock through exploring, more dangers lurk and items or upgrades to hunt down with each having a mini-game style approach to keep things interesting. You’re free to do as you please and in your own time which is great. Coupled with the fact you spawn as a clone if killed means you can make leaps of faith and experiment a little. Although if killed you have to return to where you died to collect your backpack and its loot. Toss in some boss battles here and there and Journey To The Savage Planet ticks all the right boxes for a neat action-filled first person adventure.

Visually, the game features an assortment of themed locations as you might expect. However, the entire design looks fantastic with strange plants and unusual, yet familiar looking lifeforms. It’s a colourful game that’s easy on the eyes and runs smoothly on PC. As expected it comes with the usual assortment of graphics options to tinker with. Running the game at 4K60 FPS at max settings using an RTX 2080 Ti was smooth as butter for the most part.

Audio comes in with a ton of quirky comments from your female robotic suit companion AI alongside the complimentary music and sound effects. She’s fun and useful as she basically keeps you on the right-path throughout the adventure. The mad scientist-cum-CEO character Martin Tweed also offers some craziness in his messages. As mentioned, there’s plenty of humour here which keeps things entertaining.

Our playtime came in at just over 15 hours completing all of the story and some of the challenges and side-missions. There are collectibles as well and various upgrades if you want the full 100 per cent completion. For the asking price (£21.59) and with the quality on offer this is great value for money especially when you include the option to dive-in to two player co-op.

Journey to the Savage Planet is a fun and likeable game with great visuals and a quirky feel that keeps events and gameplay interesting. Players can take their own time with things and explore this crazy and wacky world. It’s not the most difficult of games but this factor alone makes it very accessible. It ticks all the right boxes and doesn’t really falter as far as we’re concerned. Therefore it comes highly recommended for adventure fans looking to broaden their horizons on this unusual planet. The only thing missing here is VR support which the game style would make a great fit. But you can’t have everything.